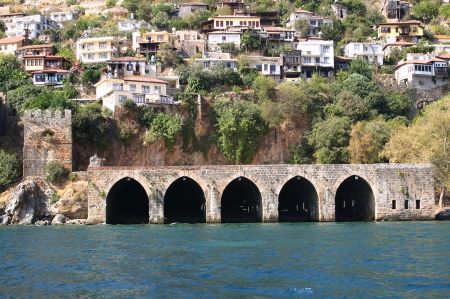 The old ship wharf of the Seljuks in Alanya. The Wharf of Alanya, situated south of the Red Tower and directly on the sea, is one of the main buildings belonging to the former fortress of Alanya.

In the past this wharf belonged to the ruling sultans and their marines and it was used to build battle ships under the protection of the castle. Built in 1227 with massive walls and a ceiling it was strong enough for building large battle ships in safety and nobody was able to disturb the builders while new ships were laid.

Five huge arrow-shaped stones at the front carry the weight of the construction which is about 51 metres in length, and with a width of 40 metres the whole building covers 2040 square metres. All the weight bearing parts of the foundations and the walls are made from strong natural stone cut from the mountains while the ceiling consists of fired bricks to save weight. All the support walls show lot of openings for daylight to make it bright inside.
Even today, the sea flows into the wharf for about 4 metres, carrying lots of sand and small stones into the building.

You can still reach the galleries from the northwest of the old harbour. There is just a very small door, with an arrow showing some interesting inscriptions. A little above that, you will find the decorated emblem of the sultan. On the right next to the entry is a small room, which some historians say was once as a small mosque.

Other theorists believe that this room was used to store materials. To the left of this room was the workers’ place for sleeping and eating.
During the reign of the Osman dynasty, there was an extra ceiling introduced into the eastern corner of the roof to hide the canons stationed on the wharf.

During the reign of the Seljuks this wharf became the second most important marine base after Sinop. Lot of businesses and, of course, warships, started from here. It was because of building this wharf that the Sultan Alaeddin Keykubad got his nickname “Sultan of the Sea”.

The antique town of Hamaxia - Alanya