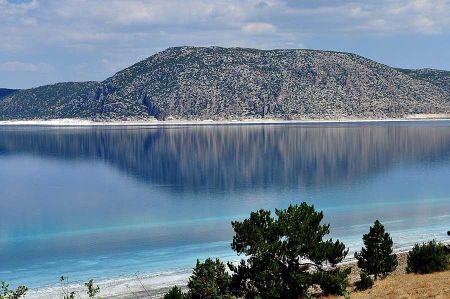 The Salda Lake is the most famous and clearest crater lake in southern Turkey, the lake is located within the Yeşilova district in Burdur district, only about 150 kilometers from Antalya.

There is a village with the same name Salda. The pristine, beautiful lake has become a tourist attraction for local and foreign tourists. The lake, surrounded by beautiful mountains and forests, which in winter almost looks like the Swiss Alps, has many special properties. The white sand and the clean, turquoise blue water resemble the sea water as in the Maldives, therefore the Turkish vernacular calls the lake the Turkish Maldives. The islands within the lake complete the fantastic landscape. At 196 meters, the lake is one of the deepest in Turkey and covers an area of ​​43.70 km2. One of the most interesting things is the fact that the lake's water level is over 1,316m, which is unusually high for a freshwater lake. Many academic studies have been carried out on Lake Salda.

More facts about the special lake 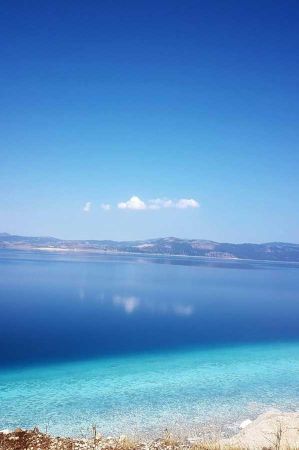 For example, scientists discovered that the lake is one of the places where ancient stromatolite algae still grow. The blueprints of the past are also so impressive because the vegetation was able to develop after a volcanic eruption. Other peculiarities of the tectonic lake are that you can find rocks similar to those on Mars on the beach, which is indeed mysterious. It is believed that millions of years ago the red planet “supplied” Salda with the stromatolic rock in the form of meteorites. As you surely know, there are markings on Mars that are similar in appearance to rivers and lakes.

The lake is a popular expedition site for researchers from inside and outside the region, all the more because of the hydromagnesitic mineral found in its coastal waters, which is believed to provide a base material for therapies to treat certain dermatological diseases.

The coasts, surrounded by black pine forests, are also popular with wildlife. The natural remaining place has many different endemic plants and animals such as fish, turtles, quails, rabbits, foxes, wild boars and wild ducks. Scientists found that there are more than 100 species of birds here. This locality has been classified as a nature reserve and is protected by the government. White sandy beaches, clear water and lovely crystal-white islands in the lake complete the landscape. The sand is almost comparable in color to the sand in the Maldives. In fact, this is the place where the sandy beach almost resembles powdered talcum powder, so fine due to the ingredients of a magnesium mineral that gives it that white color.

Salda Lake - the "Maldives of Turkey" 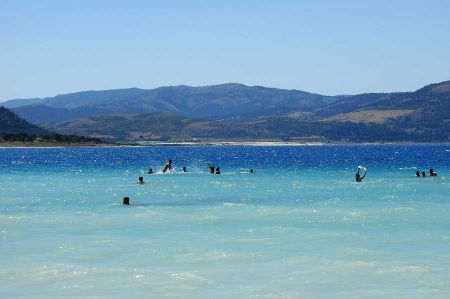 Lake Salda - the "Maldives of Turkey" - has had a turbulent year. First a rush of visitors, then heavy pollution, and finally a program that is supposed to protect the lake and its surroundings. In the meantime it is no longer allowed to swim around the "white islands" of the lake, there is a fire and smoking ban on the banks and it is forbidden to use or steal the health-promoting mud. At the same time, the governor's administration is trying to develop an environmentally friendly concept that enables sustainable tourism.

After Lake Salda was declared a special zone for environmental protection in March, the Ministry of Environment and Urbanization carried out various studies and works to preserve the region. Now they have started to build wooden huts made of completely natural materials for visitors at a sufficient distance from the shores of the lake - in such a way that they do not affect the environment or the appearance of the Salda lake.

We have 395 guests and no members online