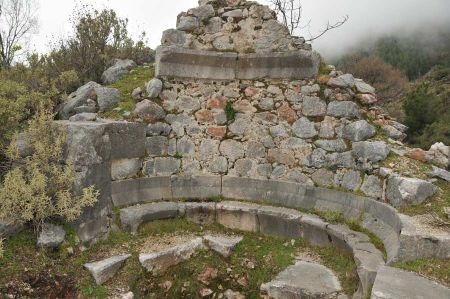 The antique town of Laertes is 25 km from Alanya at an altitude of around 800 metres with steep slopes to the east, west and south and bordering the foot of 1649 metres high mountain Cebel Ires to the north.

Take the coast road past Mahmutlar and past the sign to Syedra. Then turn left (sign) whereupon you reach a roundabout with a statue of a man with turban. Take the second road in the roundabout (west) and then first time to the right (to the north) in the direction of  Gözuküçüklü. After 11 km you get to a sign with Laertes on it, where you can park the car. If you prefer to drive , go on in the direction of the sign to the left along a stony road, where careful driving is recommended. Finally you get to a path to the north west of the ruins. The terrain is steep and uneven, and the ruins are generally in a bad condition.

The names of these towns in ruins are not always known, but in this case the town name was found on the foot of a statue of the Roman Emperor Vespasian. The town existed already in 625 BC; a Phoenician table from that time has been found here (now at Alanya Archaeological Museum). The table tells that the governor of the province gives his servant a piece of land. Another Phoenician inscription praises the good wine of the area. The Greek philosopher Strabo (around 63 BC – 19 AD) tells that the town lay on a breast-shaped hill, and that ships could  anchor there. This must be the antique Mahmutlar. Laertes was under pirate control until 67 BC, and the pirates did not preserve the Hellenistic buildings, so they have disappeared and are completely replaced by Roman and Byzantine buildings. Coins were made here under Emperor Trajan ( 98 - 117 AD), and experts have established that the town was relatively densely populated during the 1st and 2nd centuries AD,  the heyday of the town. This is also supported by the numerous inscriptions, all in Greek and from the 1st to 3rd centuries, and parts of reliefs with eagle claws and oxheads also found here. The town has also served as a retreat for retired Roman soldiers from various parts of the empire. Among them an inscription about the Syrian veteran Galba and another one of Aurelius Neon Hierax. In the Alanya museum there is a diploma for a Roman soldier who has sett-led in the town after retiring from the army. Another inscription tells that the town fostered an olympic champion by the name of Polemos Nou.

It was probably the Arab pirates and sanding up of the harbour that killed the town.
The agora (market place) with shops in the western part is in less good condition. To the north are seats arranged in  a semicircle, the lower row decorated with two lion feet, a so-called exedra, where the townspeople and philosophers could discuss and relax. The nearby Caesar Temple was built by Emperor Claudius (41-54 AD). Even though the town was ethnically Greek during Roman times, as were many places on the south coast of Asia Minor, it was one of the first towns in Cilicia where the Roman emperor was worshipped along with other gods.  At the south end of the agora are the public baths and further south the necropoli. To the east one can see an odeon (covered theatre for meetings and concerts) or bouleuterion (meeting place for the city council), on Emperor Street, which used to be lined with columns. But this street is almost impossible to find amid all the piles of stones. On the seats of the odeon is a turned over stone from the 3rd century commemorating Toues, a high priest and member of the city council. The Greek text also tells that he had occupied all the functions of the city, arranged two festivals and financed the bridge across Melas (Manavgat), so that also Side had honoured him with a statue.

Immediately to the west of the odeon on a hill top stands an Apollo Temple, and south of it a Zeus Temple in miserable condition. They were the main gods along with the emperor and the two gods are often depicted on the coins of the city. Further up is the acropolis and the necropolis is south west of it. A small stadium is found on the flat area to the west and next to it are the remains of a church with apse and red and blue marks from murals.