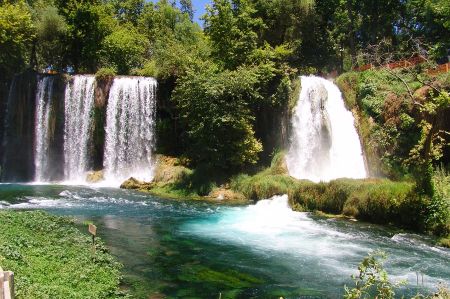 The magnificent place of Düden Waterfall is about 10 kilometers distance to the beaches South East of Antalya away and can easily be reached by dolmus or with a rented car on well prepared asphalt roads.

At the waterfall the river Düden is leaving a higher plateau of the Taurus mountains by falling about 15 meters deep and 20 meters wide onto a lower plateau which nearly on the same level likethe outskirts of Antalya. Because of the raw ingredients in the water, huge amounts of Tufa stone materials have formed the river bed as well as the caves below the waterfall.

Some of the sinkholes can "devour" an entire river or lake. In this region near Antalya, the large sinkhole Suğla (Konya) and the sinkhole Bıyıklı produce 30 cubic meters of water per second (1,100 cu ft / s). This amount, in turn, is the discharge of the water volumes of Kırkgöz and Pınarbaşı as sources of flooding.

The water, which disappears in the Bıyıklı Doline, then flows 14 km underground and comes out at the sinkhole Varsak again. After a very small waterfall, it disappears again at the other end of the sinkhole. The water that disappears in Varsak into the earth, flows 2 km into the ground and comes out in Düdenbasi by pressure from a siphon. A regulator built in front of the Bıyıklı sinkhole diverts the waters of Kırkgözler and Pınarbaşı into a canal to the Kepez hydroelectric power station, where a pressure pipe leads to a balancing funnel and drops it over the turbines of the facility.

When arriving at the waterfall you will need to pay a small amount as entry fee and get into a nice green park area with botanic garden, open sky tables and benches inviting you for a picnic. You can hear the sound of the falling waters which is as well shimmering through the trees in ice blue colours. All the area is kept in nice condition and the view onto the waterfall is great. Some stairways leading down into the valley where you can walk along the river. Some other springs deliver more water to the Düden river, so this is falling into the valley as well. Because of all the Tufa minerals in the water there are some place where stalagmites and stalactites are still growing, the heart of speleologists would immediately start running in higher frequencies. 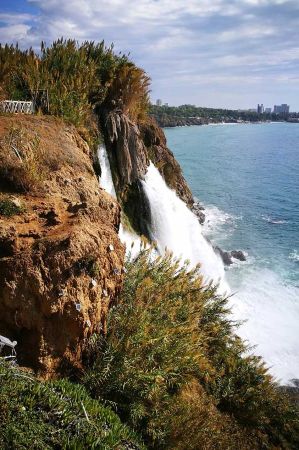 For sure highlight of this sight seeing event still is the big waterfall which is giving lot of noise and steam of water. Once climbing down into the valley you will find the way leading into the Tufa cave behind the waterfall. It is like getting below roofs build from natural material Tufa, further and further growing down into the valley, so that after thousands of years the corner where the water is falling moved away from the rocks. There are certain natural rooms in the cave connected by small paths, some of them seem to be broken by human beings. Even so, you can watch the waterfall from the back side as well. There is another stairway leading up to the walkway of the park again. Total length of the cave may be about 40 meters.

The water from the drainage system of the plant is brought back to Düdenbaşı through a long channel where it forms artificial cascades. From there, the amount of water is that of a large river. Seven irrigation ditches distribute the water northeast of Antalya.
After Düdenbasi the waters of Düdençay separate into a series of streams and finally east of Antalya 40 meters from a platform into the Mediterranean Sea. A park surrounds these waterfalls. You can be seen from the sea with a boat trip from the marina of Antalya.

A beautiful alternative to daily sun bathing at the beach.

Düden Waterfall at the cliffs at Lara