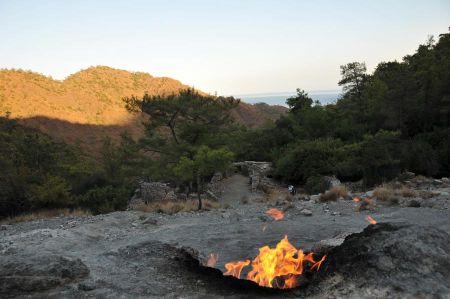 Most well known all over the world is the ancient place next to Kemer called Chimera which origins from Latin language meaning "Burning Stone", a natural phenomenon since a couple of thousands of years: From below the rocks of a mountain, flames occur on the surface in different places, the ever lasting "Fire of Chimera".

We have been visited the Valley of Olympos with its ancient harbour and the ruins of the town, visited the beach for a swim and had a nice meal in one of the restaurants, when we decided for a hike to the Fire of Chimera. Additional we decided, it could be a good idea to start hiking there later in the afternoon, since the fires will be more visible when it is getting dark. As semi-professional hikers, we know, that it is always a good idea to take headlights with you, since there is still the way back.

And what should we explain more, just enjoy the pictures below.

Chimera is situated 8 kms away from Olympos. Scientists are as mystified as the people of ancient times as to how fire spontaneously erupts from holes in the rocks. Chimeras was another Lycian city and is named after the mythological son of Typhon. Legend tells that the Chimeras was killed by Bellerophon who mounted Pegasus and bombarded the Chimeras with molten lead. From a realistic point of view, the most logical reason for the flames are that there is natural gas seeping through cracks in the earth - although scientists are still unable to discover the compounds of the gases. The mythological reason for the fires is far more interesting than the scientific one - let the visitor decide! To truly appreciate the effects of the Chimeras it is best to visit the area in the evening. The almost pyrotechnic effect is most impressive during the hours of darkness. Looking away from the magic of the fires there is the added bonus of spectacular views of the Lycian ruins above.

We enjoyed it too much and were happy to have taken our headlights with us. For sure, it is almost important to wear hiking shoes, but this I do not really need to explain.