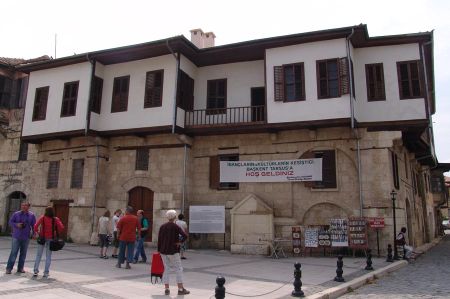 Tarsus was the Capital of Cilicia, situated on the banks of the river Cydnus and commanding the road from the Mediterranean Sea to Central Anatolia through the Cilician Gate.

Hittite texts from the fifteenth century BC already refered to "Tarša" as the residence of the lord of Kizzuwatna. Later, the city may have belonged to the realm of Mopsus of Karatepe, and in 713, the Assyrian king Sennacherib added the city to his possessions. After the fall of the Assyrian Empire in 612, Cilicia became independent and Tarsus was the capital of the king.

According to a local tradition that can, because of chronological reasons, not be true, this was the site of Marc Antony's meeting with Cleopatra (41 BCE).  He had to cope with invasions from Babylonia, like the failed attack by king Neriglissar in 557 / 556 mentioned in the chronicle known as ABC 6.
In 333, Alexander the Great occupied the city, and stayed there while recuperating from an illness. After the death of the Macedonian conqueror, Tarsus became part of the Seleucid Empire under the new name of Antioch on the Cydnus. Becoming hellenistic, Tarsus started to claim that it had been founded by Perseus (Ammianus Marcellinus, Roman History, 14.8.3). In 171, the city unsuccessfully revolted because king Antiochus IV Epiphanes had given it as a present to his concubine, Antiochis (2 Maccabees, 4.30).

When the Seleucids went down in a series of dynastic conflicts, Tarsus was the capital of the northern part of the empire, until the Roman general Pompey the Great added Cilicia to the Roman Empire (66 BC). The city got its old name again, although after the death of Julius Caesar, it was briefly called Juliopolis (Cassius Dio, Roman History, 47.26.2). It played a role in the civil wars and at some stage, all inhabitants were awarded with the Roman citizenship. This was the age of Tarsus' greatest prosperity, and it may be noted that Dio Chrysostom calls the city "the greatest of all towns in Cilicia and a metropolis from the outset" (Oration 34.7). Envy of Tarsus' wealth may behind the description of the city in Philostratus' Life of Apollonius, which, in this section, is based on a text written by someone from Tarsus' neighbour and rival, Aegae:
Apollonius found the atmosphere of the city harsh and strange and little conducive to the philosophic life, for nowhere are men more addicted than here to luxury; jesters and full of insolence are they all; and they attend more to their fine linen than the Athenians did to wisdom; and a stream called the Cydnus runs through their city, along the banks of which they sit like so many water-fowl.

During the Empire, the city was an important centre of the cults of Mithras and the emperor, but it also appears to have been open to cult reformers like Apollonius of Tyana. Its most famous son was the apostle Paul, a Pharisaic Jew who converted to Christianity and spread the Gospel to the Pagans.

The city was captured by the Sasanian king Shapur I after the defeat of the Roman emperor Valerian in 260. Although the city was reconquered by the Romans, it was now slowly eclipsed by nearby Adana. However, the town was still important in Late Antiquity, when the Byzantine emperor Justinian constructed a bridge and invested much money to give Cydnus a new course (Procopius, Buildings, 5.5.14-20).