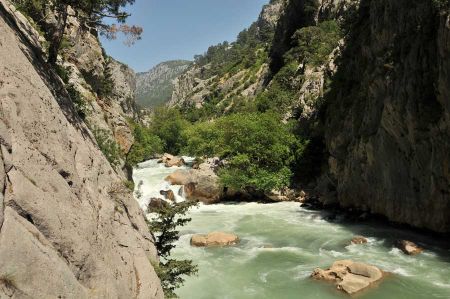 The Manavgat River, which originated in Taurus and was called Melas in antiquity, also formed the eastern boundary of ancient Pamphylia. Today it flows through the large Oymapınar Reservoir, one more smaller reservoir before it reaches Manavgat and flows into the sea a little later.

The length of the Manavgat River, which has its source on the eastern slopes of the western Taurus Mountains and steadily flows down the valley at a constant speed, is 93 kilometers. It is the largest river in the Antalya region. 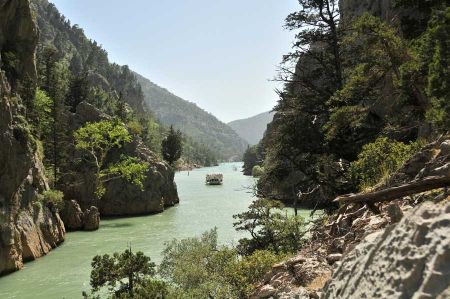 The 185-meter-high Oymapınar Dam was built in the area of ​​the former village of Oymapınar for energy purposes and put into operation in 1984. With the construction of the dam, a lake of about 50 square kilometers was built. Of course, the flow speed of the Manavgat River was significantly reduced with the construction of the dam. On its way through the valley, many underground springs feed more water into the river. The turquoise blue color of the river water, especially in the spring clearly recognizable, is due to the carrying different minerals in the river water.

Today, there are numerous pleasure boats on the reservoir, popular with locals and guests. For fans of canoe and / or rowing boats, crossing the reservoir is a good way to reach the influence of the Manavgat River in one of the tributary valleys.

A natural domicile for birds and fish 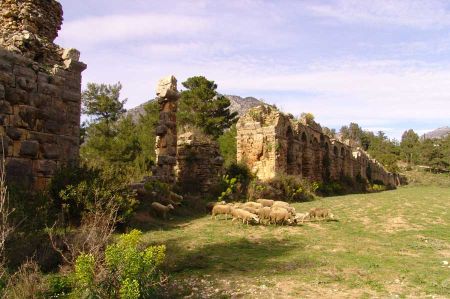 The Manavgat River and its immediate surroundings have become home to a variety of fish species and birds, while at the same time allowing gentle tourism a variety of recreational opportunities. There are daily boat trips on the river and also on the artificial lake, both with a wide range of alternative options for increasing tourism. So you can swim in the cool river as well as small expeditions in the canoe in the now flooded gulches are undertaken.

The river has also become a center for active people who appreciate rafting. However, with its high levels of difficulty, the Manavgat River is a dangerous terrain for beginners. Only later, the water becomes calmer and the river allows you to observe the virgin nature and its beauty. The always cold water of the canyons, which reach the river at different places, mix with the river water and thus create a fascinating play of colors in the sun.

Some parts of the ancient aqueducts, which were mostly built in Roman times to supply water Sides, are quite well preserved and can be visited. Part of this formerly almost 30 kilometers long and up to 25 meters high aqueduct was struck as a gutter system directly into the rock.