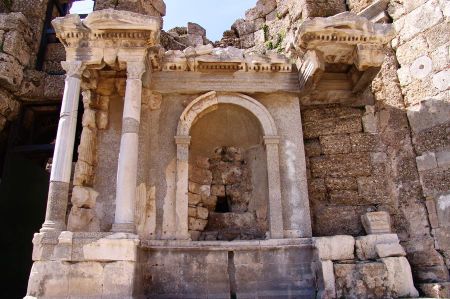 According to legend Side is named after the goddess of fertility and nature, Side, which also means pomegranate. The story goes that Side was walking along the Manavgat River with her little daughter and her nymphs. They picked flowers and passsed a tree with thin branches, shiny leaves and colourful flowers.

When Side broke off a branch for her daughter, the tree started bleeding. Side understands that the tree is a nymph who has disguised herself as a tree to escape evil people, and she becomes sad. She  wants to leave but her feet are stuck in the ground. From her feet bark starts growing and she begins to take the form of a tree. The nymphs become very sad and their tears wet Side’s roots. “I have done something wrong”, says Side, “from now on with my many bloodcoloured fruits I will be a symbol of nature, life and fertility. Let my daughter come here often to play in my shadow. Let her not ruin any tree, maybe any tree or flower is a god in disguise”. Since then pomegranates spread all over the peninsula and the pomegranate on coins and walls became the emblem of ancient Side.

The word side is Anatolian and indicates where the first settlers came from. Probably they were Hittites from Anatolia. Excavations have disclosed a base of a basalt column of late Hittite origin dated to the 7th century BC. Maybe people settled here after a small migration following the destruction of Troy around 1200 BC. The Greek geographers Strabo (63 BC-19 AD) and Arrianos report that the first greek speaking inhabitants came from the town of Kyme in western Anatolia, 50 km north of Izmir, and when they came they could not understand the language spoken in the area. This colonisation probably took place in the 7th century, but it seems that the immigrants became so well integrated that they forgot their Greek. Several inscriptions from the 3rd and 2nd centuries BC cannot be interpreted nor translated. Coins dating back to the 5th century BC have signs that cannot be understood, and only in the 2nd century BC do Greek coins appear. Also the Greek pantheon seems to have been forgotten, for they worshipped Anatolian gods in the form of the mother goddess Cybele and the moon goddess Men.

We know that Side was Hittite and was a part of Lydia in the western part of Asia Minor in the 7th century BC and came under Persian rule in 546 BC. But the town could make its own coins in the 5th century BC, which presupposes a certain degree of independence. They probably did not fancy the Persians too much, for in 333 BC they surrendered to the Macedonian Alexander the Great without a fight, and from then on started the Hellenization on all fronts, including language, architecture and mythology. In this way Cybele became the Greek goddess Athena* and Men was replaced for Apollo.

After Alexander’s death Side first came under Egypt’s Ptolomaic Dynasty and later under the Seleucid Dynasty in Syria, both founded by Alexander’s generals. The harbour was expanded and the town quickly became one of the most important and richest towns on the south coast with a population of around 40.000 inhabitants. In 190 BC Side witnessed a great sea battle between a fleet from Rhodes supported by Rome and the Kingdom of Pergamon and a fleet from the Syrian King Antiochus III, under command of the later famous Hannibal from Carthage. Side supported Hannibal and Antiochus, but the fleet from Rhodes won. However, Side managed to stay clear of Pergamon and remained independent. In this period Side was a centre for commerce, culture and education in the eastern Mediterranean. For instance Antiochus VII, who ascended to the Syrian throne in 138 BC, was educated in Side, and he later took the byname Sidetes as a reminder of his happy young years in the town. Another famous citizen was Mnemon, the doctor, from the 3rd century BC.
In the 1st century BC pirates from Cilicia spread to Pamphylia, where Side was the biggest and richest port. There was a na-val base, shipyard and the biggest slave market in the Mediterranean, which meant more trade, but also a bad reputation. Stratonius, who was famous for his sharp tongue and keen wit answered the question “which people is the worst and the most treacherous?” by saying: “In Pamphylia it is the people from Phaselis, but in the whole world it is the people from Side”. But the Roman general Pompey expelled the pirates in 67 BC, and Side came under Roman domination, and the Romans erected several monuments and statues in honour of Pompey.

Under Roman domination Side experienced another golden period. From the 1st to the middle of the 3rd century Side became a big city and seat of the provincial governor. Sea trade, especially with Egypt, increased and the imported goods travelled by caravan to central Anatolia. They exported olive oil, wine and timber. Hundreds of shops spread along the main streets and into the small alleys. The town kept its slave market, and the slaves mainly came from Africa. The merchant navy was large, and they did not object to a little piracy when the occasion arose.
Not only the merchants benefited, but the whole town profited. Great sums were given to competitions and theatre activities, to town development and social and religious institutions. Some inscriptions report, for instance, that soup kitchens were provided for the people in the public sector and for the elderly, one woman organized gladiator fights and another held a party for the sailors. The greater part of old buildings and monuments in Side are from this period.  At the end of the 3rd century the town was attacked by mountain tribes, who in 269 destroyed the aqueduct, which was a tragedy as there were no springs in the town. The aqueduct was repaired by the Lollianus family. In the 4th century the attacks became so serious that parts of the town were abandoned and a wall was built across the peninsula on either side of the theatre. In the 3rd century there was a Christian community and Emperor Diocletian  (285-305) started persecutions of Christians. From this period there are also remains of two Jewish synagogues.

Side’s last period of bloom came during the Byzantine Empire in the 5th and 6th centuries, when the town became the seat of the archbishop of west Pam-phylia. Some of the temples were transformed into Orthodox churches and the town grew outside the city walls. In the middle of the 7th century the Arab pirate attacks began, and the whole of the Anatolian Mediterranean coast became a war zone. At the same time the harbour sanded up. The inhabitants started moving to Antalya, which was better protected and gradually took over from Side. There was a big fire in the 9th century and in the 10th century Arab pirates established a pirates’  nest in Side. Earthquakes and sanding dealt a deathblow and Side disappeared under the sand. The Seljuks settled north of Side in 1207, the Ottomans, another Turkish tribe, took over in 1391.

After theTreaty of Lausanne in 1923 an ethnic cleansing took place in that Greece and Turkey exchanged minorities. The Turks expelled from Crete settled at the end of the peninsula and founded the fishing village Selimiye - the present tourist town. Since 1947 Turkish archaeologists have been digging here, but local people were also enterprising, and several collections of Side coins have been sold privately on European auctions. In 1986 560 silver coins from the middle of the 2nd century BC, weighing 8.5 kg, were sold on auction.

In the 1970s the first tourists arrived and since the 80s it is has been a centre of mass tourism. Today Side is on the UNESCO list of protected areas.