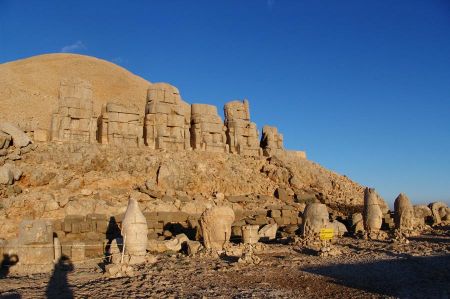 Like the years before the 14th of July, the day of “Appearance of the great Gods” will be celebrated at Mount Nemrud having some meetings and festivals.

This day, in ancient times of dating called as 10th of Loos, was the chosen day of Mithradates for his crown ceremony, in modern times dating 14th of July 139 BC.

And as usual to celebrate crowning day of the following years, people of Kommagene should gather close to local holy places to spent a day off.

As the local leader of Nemrud Foundation was writing to alaturka by mail:

Thank you for your kind interest to our event, unfortunately this year we try to prepare the event in a very short time period, for upcoming years our aim is to make it a real international event.
I don’t know if Maurice has told you about the replica of the Lion Horoscope. We are trying to bring it to Kahta from Holland. Ministry of Culture will be a half sponsor of it with Nemrut Foundation. Thus the minister gave us a promise to bring it in this week and make it ready in the festival interval.

Our aim is to launch the replica at the exact time of 14 July 19:37 which is the throne ceremony of king Mithrades in B.C. 139.  In addition to that we planned a non-academic international conference to refresh the memory of works on Nemrud mountain and to put a further target to enhance the content for the upcoming years. The exact participants are Marurice, Anneten Brink, Demetrius Waarsenburg, Nezih Başgelen (all for 45’ presentation) and we are still waiting for approval of some others. In addition to that the documentary of “ Queen  of the Mountain” which was shoot by Martha Goell about Theresa Goell ( the archeologist who spent her whole life in Kahta Nemrut ) and his works and old Kahta. Akgun Akova from the Toy Museum in Istanbul, producer and photographer will give a speech on that documentary, he is stating that everybody in Kahta will see a relative of his/her – their grandfathers etc..

The Lion Horoscope (with kind permission of Nemrud Foundation)

The Lion Horoscope is a is a stone slab measuring 1.75 x 2.40 metres with a thickness of 0.47 metres. It shows a lion marching to the right. It is the Lion Horoscope.
The body of the lion is covered with 19 stars. Each star has 8 pointed rays. Apart from a small difference the positions of the 19 stars represent the constellation of Lion as described in the Ephemeris of Eratosthenes.

The lion wears under his neck a sickle, symbol for the new Moon. Above that dish the star Regulus radiates. Regulus has been associated with the king throughout history of mankind. It was named Regulus by Copernicus after the earlier "Rex", equivalent to the "Basileos" of Ptolemeus. In ancient Akkadia known as "Amil-gal-ur" King-of-the-celestial-sphere. In Babylonia as "Sharu" the King. In ancient Persia as "Miyan" the Centre, leader of the four royal stars.

Above the lions back are three stars depicted with sixteen points instead of eight. These are not stars but planets. From left to right they are Mars, Mercury and Jupiter. Above them you can read their Greek names:

The Lion Horoscope is a frozen picture of the positions of the heavenly bodies at a certain moment at a certain date. But what date ?
Jupiter needs about 12 years to pass the ecliptica, Mars 2 years and Mercury 1 year. The moon passes the ecliptic in 1 month. So the slow planets Jupiter and Mars give the year, Mercury the month and the moon gives the day.
First the years were selected in which Jupiter was in the constellation of Lion as depicted at the stone slab. From these years those were selected in which Mars was also moving through this part of the ecliptica. And the same for Mercury.
The second selection criterium was the sequence of these planets, being Mars-Mercury-Jupiter according to the Lion Horoscope. As a result the constellation of the 14th of July 109 B.C. was selected.
Normally Mercury can not be seen with the naked eye most of the time. However, on this particular day Mercury had reached almost its maximum distance from the Sun and was therefore good visible.

This particular phenomenon makes it possible to determine not only the date but also the time of the constellation, being 19h35 Local Real Time. So, the Lion Horoscope indicates not only the date of that particular constellation but even the exact hour!
This as amazing as it would have been to the scientist Puchstein who wrote : "Such a relief can only depict very roughly the positions of the celestial bodies....."