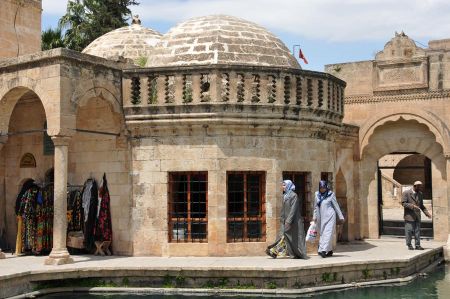 Sanlıurfa as a city is mostly known by the Europeans with her antique name, Edessa. Sanlıurfa is the central part of a city in Turkey with a population of about 390.000 and is located in the hot climate zone in southeast Anatolia. In geographical terms, she is part of Northern Mesopotamia.

This geographical term in itself points out to an existence of thousands of years. The city as well as the region was known as Urfa up until 1983 but her name was added the prefix "Şanlı" (Glorious) after that date. The reason for the change was to officially recognize the resistance displayed throughout the Turkish Independence War after the French occupation following World War I. As a result of the independence war, last elements of Christian population, consisting of Armenians and Assyrians, has left the city in the 1920ies.

Sanlıurfa, at a distance of 80 kilometers to Euphrates river and about 45 kilometers to Turkish/Syrian border, is located on the northeastern section of rather fertile lowlands, surrounded by mountains in the eastern, western and northern sides (Fertile Crescent: transformation into settled life from hunter gatherer societies in Neolithic ages). On her southeastern region are the Harran plains. Karakoyun, Cavsak Sırrın rivers are three waterways that cut through the city. In examining the urban maps drawn by Niebuhr in 1766 and Helmuth von Moltke in 1838, one can conclude that the direction of Karakoyun River was diverted, possibly in Roman times and the water systems were adapted to the needs of urban living by the Roman engineers.

Sanlıurfa is at the crossroads of ancient trade routes as the East/West route coming from Iran and Nisibis (Nusaybin) direction, and crossing the Euphrates River in Samsat, finally reaching the Mediterranean coast. Another of the routes was the North/South route passing over Anatolian mountains, through Diyarbekir, reaching Harran and Syria.

The population mostly consists of Kurdish, Turkish and Arabic elements. Being the majority at one point, the Christian population consisted of mostly Aramaic or Assyrian and Armenian elements.

We were kindly taken to the location chosen as the site for the new museum in the city center by the Sanlıurfa Director of Tourism. Remains of a Roman Domus (Villa) were discovered on the site many years ago when foundation works were being carried out. We were told that the floor mosaics of the domus were in such good condition that it had become necessary to protect them. As the tedious excavation works were continued, other rooms with equally magnificent mosaic works were discovered. Today, those findings have international fame under the name of Haleplibahçe Mosaics. A product of high level of refinement and elegance, Haleplibahçe Mosaics represent the hunting scenes of warrior Amazon queens and the life story of Trojan hero Achilleus, which are both important elements of Antique Greek Mythology.
The geometrical motif, floral designs, pigeons, wingless Eros, squirrel, duck, tiger, partridge, gazelle and greyhound figures decorating the borders of hunting scene mosaics are truly unique.
Following the discoveries, the entire domus complex was covered with a leant-to-roof and wooden walkways were constructed for the visitors. Along with the mosaics, part of the Roman aqueduct system can still be seen. The water system extends all the way to the ruins of the Roman bath at about 400 meters distance.

According to the Christian tradition, Apostle Thomas, one of the apostles of Christ, had formed the Syrian church in Edessa. In line with the tradition, the bones of Thomas was exhumed from the Parthian country or India and reburied in Edessa. Ibas of Edessa had than built a church over the grave. There are many other churches in today's Sanlıurfa. However, many of those have been converted to mosques or are used as museums or cultural venues in line with the tradition in Turkey. The changes dreamed of are becoming slowly. The "St Petrus and Paulos Church" of the past, the Reji Church in its current roles a cultural center is one example of such variety in usage. This place was used a tobacco factory for at one point in time. We had the chance to visit a mixed painting exhibition organized by the painters Ahmet Güneştekin and Prof. Mehmet Mahir (both from Istanbul). The artists were at Sanlıurfa and Harran under the auspices of a project named "Art Visiting People".

An old Armenian church, "The 12 Apostles" is one such example of church converted into a mosque. The church serves as "Fırfırlı Mosque" today.

Sanlıurfa is the fifth sacred city in the religion of Islam. It is believed that the prophets Abraham and Abu_Ayyab have lived in this region. According to Islamic tradition, Prophet Abraham was born here. In this context, the city of Sanlıurfa is associated with the city of Ur, mentioned in Old Testament. The city is also known as "The city of Prophets" in the Middle East.

A central part of pilgrimage to the city of Sanlıurfa consists of the sacred Halilürrahman Mosque and the "Fishlake-Balıklıgöl" situated within the complex. Sacred and untouchable silvercarp thrive in the lake. According to legend, when condemned to death by burning, the life of Prophet Abraham was saved when the faire was transformed into water and the wood transformed into fish. It is possible to see visiting Moslems from all over the world in the surrounding parkland. The visitors are there to visit the Balıklıgöl as well as the Rizvaniye Mosque and Hasan Sultan Mosque, both located in the parklands, and pray in the sacred mosques.

Immediately beyond the park begins the fortifications and moat and walls of the Castle of Sanlıurfa. It is well worth climbing up in any case because a superb panorama of the park, the mosques and the city awaits the curious.

At the end of our city tour, we were invited to Küçük Hacı Mustafa Hacıkamiloğlu Mansion. This is a very old mansion that has been converted into a chic restaurant. A large inner court with seating arrangements overawes the visitor. When now thinking of the high walls protecting us from the heat and the delicious food served, spending some time in this old structure reminiscent of the bygone becomes even more attractive for us.