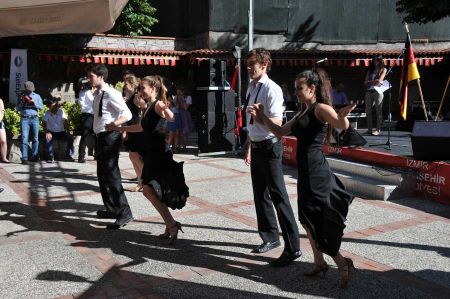 Turkish – German Friendship Day, which has become a tradition already, will be organized under auspices of the German Consulate General in the yard of Izmir City Archive (Ahmet Piriştina City Archive and Museum, APICAM), in Izmir – Çankaya on 21st September, 2014 between 14:00 – 20:00.

In terms of cultural activities; a colorful program, plenty of awards in jackpot, a cheerful child program, book bazaar and booths of German – Turkish communities, schools and companies wait for the visitors. Besides; the German foundations such as Izmir German Consulate General, Goethe – Institut Izmir, the German Archaeological Institute of Istanbul and Izmir German School will find the opportunity to introduce themselves. The multicultural band ‘Makkas’ from Bremen will energize the day with a cheerful atmosphere. In the concepts of the German beer garden and Turkish tea garden, there will be catering facilities.

All income of the Turkish – German Friendship Day will be donated to a Turkish charity in Izmir. Entrance is free.