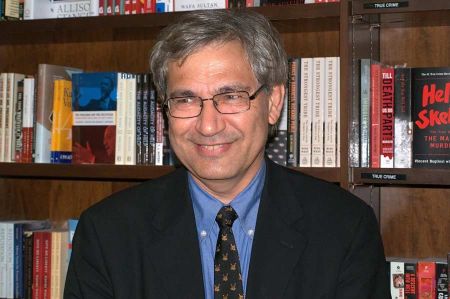 The Turkish writer and Nobel Prize winner Orhan Pamuk has strongly criticized the EU due to its cooperation with Turkey in terms of refugee policy in an unusual way.

Looking away while human rights are miss regarded and the rampant clipping liberties in the EU candidate country with the EU's values principles are incompatible, the Nobel Prize winner Orhan Pamuk said in an interview with the newspaper Hurriyet, published by the excerpts in English: "You forgot all values".

"They see us as once Saudi Arabia: If you do what we want, we do not care what you're doing at home," Orhan Pamuk continued. Through the refugee crisis and the fight against IS (the so-called "Islamic State) the EU's hands are tied as a EU onset for the observance of human rights and press freedom in Turkey has not yet taken place. The EU only wants that Turkey is reducing the number of refugees and the fight against "Islamic State" (IS), Pamuk further criticized. In the refugee crisis Europe needs the help of Turkey - and looks for it, according to Nobel laureate Orhan Pamuk, across grave human rights violations of the government in Ankara. The EU in the fight against illegal migration is taken as dependent by the Turkish government, he continued.

The EU had agreed with the Turkish government on an action plan in November, Ankara pledged to do more to reduce the influx of refugees in Europe. In return Turkey will receive billions in aid and rewarded with progress in the EU accession process. During his last visit to Berlin, the Turkish Prime Minister Ahmet Davutoglu had stated that in the refugee question Turkey go hand in hand with Germany.

Pamuk is a proponent of the Turkish European aspirations and promotes the strengthening of freedom of expression in his country. In 2005, he was brought to court due to allegations of "insulting Turkishness", but the case was later discontinued. Pamuk expressed, among 2,000 intellectuals, its solidarity with the editor of the opposition newspaper "Cumhuriyet", Can Dündar, and the office manager of the newspaper in Ankara, Gül Erdem. In the "Hürriyet" interview, the writer also expressed deep concern about the detention of Can Dündar. The prosecution alleges Dündar inter alia participation in a coup attempt against the government and calls for life imprisonment. The journalists who had researched secret arms supplies to the Syrian intelligence services to Syria, were arrested on November 26. The newspaper "Cumhuriyet" had published pictures and videos in May last year, which were made, according to the newspaper, during a search of the National Secret Service Organization (MIT) at the Turkish-Syrian border. In the pictures crates were seen filled with ammunition.

According to this publication, President Tayyip Erdogan turned to the call to the prosecutor to initiate a criminal case against the newspaper and the editor in chief. Both are now placed in prison for espionage.

Pamuk also expressed the attitude of the Turkish voters quite disappointed, who had brought a large parliamentary majority in the November election for the conservative Islamic AKP. In November they mainly voted for economic stability. Freedom of the press and other civil liberties were not so important, according to the author. The writer Orhan Pamuk continued saying that he is someone who likes to speak only about literature, but currently it is not easy. We can not just stay home writing a novel when Can Dündar is in prison.