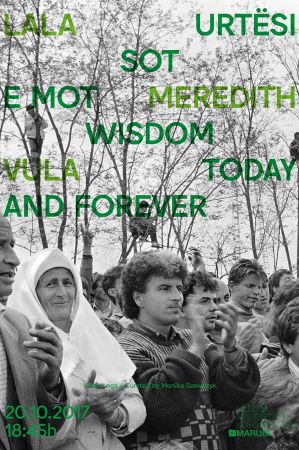 Urtësi sot e mot (Wisdom today and forever): We find the words which give character to Lala Meredith-Vula’s exhibition at the Marubi National Museum of Photography in Shkodra on a banner, in a photograph, that the Albanian-English artist made in Vranjevc, Prishtina on 4th May 1990.

They are a declaration of principles to guide a delicate historic transformation within a community. They also seem to apply to Meredith-Vula’s entire artistic practice – at once immediate and enduring, attuned to patient processes that require social grace and a collaboration with the land, including the natural materials at hand. In August 1988, four days after installing the now seminal Freeze exhibition with fellow Goldsmith’s art students, Lala Meredith-Vula left London (where she had moved from her birthplace in Sarajevo at age four) for the Kosovo countryside, where she began to photograph haystacks. In these agrarian forms she had found “the quintessential artwork.” And if she also wished to reconnect with her homelands, such an abstract desire needed to be grounded in something down to earth, like stacking hay.

Close to three decades and hundreds of photographs later, the project continues. Yet Meredith-Vula’s role as witness transformed when, in 1990, she first learned of plans to reconcile blood feuds in the region where she was photographing haystacks. Temporarily setting aside her fascination for the rural sculptures she turned her lens towards hundreds of people gathering at the behest of the Albanian folklorist and scholar Anton Çetta (1920-1995) to ceremoniously end revenge killings that had continued for centuries, paralyzing communities.

Lala Meredith-Vula’s two signature series – Haystacks and Blood Memory – are brought to interact at the Marubi Museum. Selections from these two bodies of work were recently shown in Athens and Kassel respectively, on the occasion of the international exhibition documenta 14. Yet this is a unique occasion to see the two series together. Additionally, an historical image – Kel Marubi’s photograph of a crowd gathering for a Flag raising ceremony in the castle of Shkodër on March 19, 1914, which was recently exhibited as part of Rroftë! (Long Live!) curated by Blerta Hoçia – is shown again to expand this conversation between Meredith-Vula’s distinct images to include the rich legacy of the Marubi dynasty, as well as the exhibition history of this museum founded in their honor.

Conversations in the expanded sense are crucial to art and exhibition making. Edi Hila, the eminent Albanian painter and beloved teacher of a younger generation of artists studying at The Art Academy of Tirana, has commented on the haystack photographs of his friend and fellow artist. They are, he notes: “Lala in dialogue with each haystack. It is what Lala has seen and what each haystack has said to her.” Meanwhile, Meredith-Vula’s participation in documenta 14 as well as her exhibition in the Marubi Museum were made possible through the sage advice of Erzen Shkololli, who in his role as Curatorial Advisor of documenta 14 first introduced the photographer’s work to the curatorial team. Now it is time for these various conversations to extend to you – the public.

For press inquiries please contact Tea Çuni- email This email address is being protected from spambots. You need JavaScript enabled to view it. -