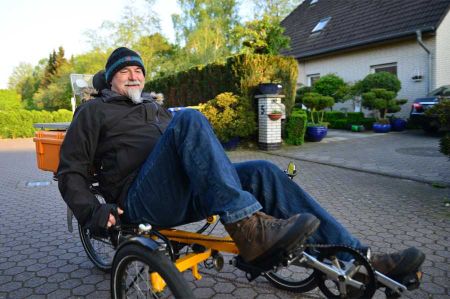 With the handover of the BTurtle, the mini-caravan for bicycles, about 3 weeks ago in Oldenburg, one of the problems for Heinrich had been solved: where and how he can stay overnight when the tour budget is small and the proximity to others on the way is to spread the ideas of his project "against the further plasticization of the oceans"

and to obtain as a broad support as is possible. Unfortunately, the weather on the day of transfer of the BTurtle was so modest that it was absolutely unthinkable to build it up in the garden that day.

In between, also equipped with the so important recumbent bike, there were just missing a few small adjustments to the bike, and then finally to start the tour, especially since the first intermediate goals are already known: 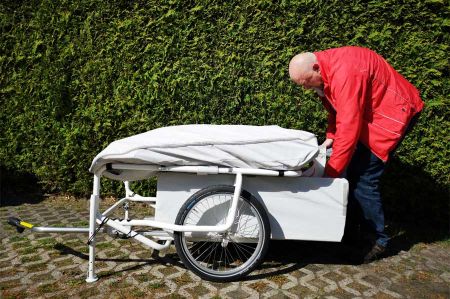 The disease-related movement restrictions had necessitated changes to the recumbent bike, which were not so easy to implement. Here, the technicians of the recumbent manufacturer had made a shoe mount and installed, which should help not to slip of the pedals, which had caused an injury to the leg during the preparation, since Heinrichs mobility is limited. Another intermediate goal was reached.

Building exercise of the BTurtle tent in the home garden 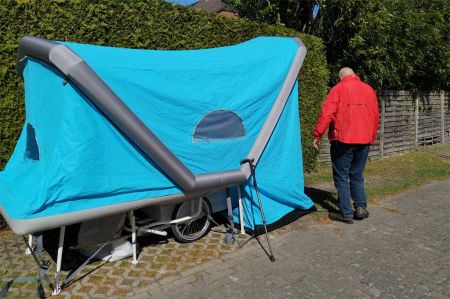 The sunny weather of the past weekend had then allowed the construction of the tent, an exercise that is not entirely without Heinrich due to his disability. It was important to find out what steps should be taken and at what time, in order to plan and prepare the coming first days as soon as possible. Together with his neighbor he had to learn to handle that was not just unfamiliar to Heinrich, but also difficult, because you need both hands to build it up. And that despite the necessary use of the hand rest, without which it is difficult for Heinrich to walk.

Amazing and admirable at the same time, from where does Heinrich take this energy.

The construction then took about 30 minutes, it was similar with the dismantling of the tent back onto the trailer. A time that can certainly be further reduced with a little more practice, Heinrich said in an interview. On the other hand, there are no time limits, so the tent construction and the subsequent dismantling in the morning can quietly take its time, the way should eventually lead to Greece.

Heinrich on tour - against the plasticization of the oceans 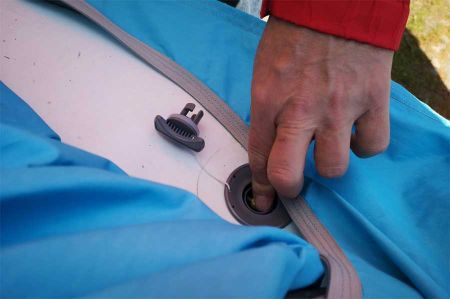 The plastic crisis threatens our seas and we humans have to find answers for that. Every minute about 15,000 kilograms of plastic waste flood the ocean! This has serious consequences for the lives of many people and their livelihoods. And for nature: more than 14,000 animal species are already threatened by plastic waste. Fish, whales, birds, sea turtles and many more are injured or die painfully due to plastic waste!

We can end this crisis within a decade when the plastic flood at its sources is stopped.

For that we need global solutions. All countries in the world are responsible to act now. The plastic crisis can be ended by a worldwide, legally binding convention. At the UN Environmental Conference in Nairobi, the world community could not agree to prepare such an agreement. (WWF Germany)