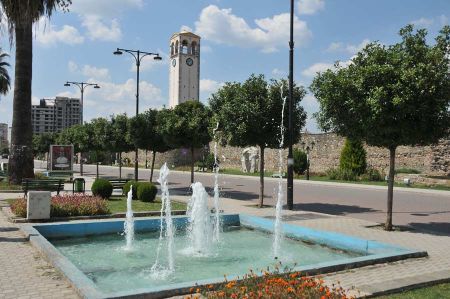 There was actually rain on Lake Ohrid, one more reason to explore the area. We wanted to continue the pursue of the roman footsteps along the Via Egnatia and took off from Kalista which is just 8 kilometres away from the border station between Macedonia and Albania on the pass at Quafe Thane.

At the top of the pass everything was grey in grey, but still dry. The processing of the border control was done quickly and  soon we went through the switchbacks on the SH3 or E 852 down into the Shkumbin valley, the historically so significant valley of course, which the once important trade route Via Egnatia followed for more than 100 kilometres. The further we drove down the valley towards Elbasan, the darker the sky became and it began to rain. We were curious to see what would the situation be in Elbasan especially the terms of weather.

The main source of the Shkumbin lies on the east side of Valamara Mountain Stocks between the peaks Maja e Valamarës (2,375 m above sea level) and Gur i Topit (2,120 m above sea level) in southeast Albania. From here the Shkumbin flows northbound, first partially absorbing deep canyons and various other source streams, across the Gora Mountains. A significant inflow comes from Mount Gur i Kamjes (1,481 m above sea level) southwest of Pogradec. In the further course it flows into a large syncline between Mokra mountains and Shebenik the east and Polis-mountains to the west. In the city of Librazhd it bends around 50 kilometres north from the source region to the west.

In a narrow incision of the eight kilometres Shkumbin Canyon (Gryka e Shkumbinit), the river breaks through the mountain range and occurs in Elbasan to the coastal area. Up here a mountain river, it changes its shape in the course of meandering, it is now flowing in a wide river bed. In the wide valley it flows  along the 41.  latitude to the Adriatic. In the end it crosses the Myzeqe level at its northern edge. North of Lagoon Karavasta, it forms a small delta with repeatedly displacing main estuaries.

The Shkumbin is, with a length of 181 kilometres (including the longest source stream) and a discharge rate of an average 61.5 m³ / s , it is one of the biggest rivers in Albania. Most of the precipitation falls in the winter months. Greater importance the Shkumbin has in terms of history, society and the market of Albania.

The river is not navigable. Nevertheless, its valley is an important route since ancient times. It forms a good passable passage from the Adriatic through the Albanian mountains. The Romans, who called the river Genusus, built the Via Egnatia, that connected Rome with Constantinople, by passing the Shkumbin valley to pass Quafe Thane and then down to Ohrid.

The closer we came to Elbasan, the more the sky cleared again and the sun was to be seen. We took advantage of the research on the Internet for planning the route to the center of Elbasan, but this would have been possible even without much planning. We quickly came to the city center and thus also to the surviving remains of the former city walls. The walls, with their eleven meters of height,  were reinforced by 26 regularly arranged and out of the wall jutting towers which today still dominate the cityscape along a pretty boulevards with small cafes and restaurants. The Ottoman old town behind the city wall with its winding streets in the center of the modern street plan is clearly visible and able to preserve a little of the oriental character. From the city walls, only the southern part is practically obtained with the former side gate. Inside the city walls there are also some restaurants and inns, which located in beautiful gardens that invite you to linger.

About 100 meters to the north in the center of Old Town, the Royal Mosque from 1492, which is one of the oldest mosques in Albania, can be found. It is an inconspicuous, almost square building with a flat wooden roof. Our interest was piqued and we stumbled on the spot with a nice preachers who invited us into the building and gave a bit of history for good. There were other mosques from the 17th century, but these were destroyed while the atheism campaign in the late 1960s. The King Mosque has survived this time, inter alia as a political assembly room.

Not far away is the Cathedral of Saint Mary (alb. Katedralja e Shën Merise), a three-aisled basilica from 1833 with iconostasis slipped from the mid-19th century. The grown at north and south portico make the building appear even wider.

The Hamam (Turkish bathhouse) outside the walls next to the Scampi hotel already existed in the 17th century, then surrounded by narrow shopping streets, the bathroom was within the week market. In the 19th century it was renovated. Exterior in good condition, a description of the interior spaces is unnecessary. It was rebuilt to a restaurant after 1990.

Around one kilometre south of the castle is the Naziresha Mosque from the 16th century. Destroyed by the communist dictatorship, the Namazgjah was the first prayer space of the country.

Overall, we were pleasantly impressed by the atmosphere of the town, which appeared clean and tidy, far better than expected. So who has a little more time in his arrival on the way from Tirana toward Lake Ohrid, should embark on a stopover to the center. Even the car park search proved just as pretty.

The ancient Roman Elbasan - once Scampa at Via Egnatia