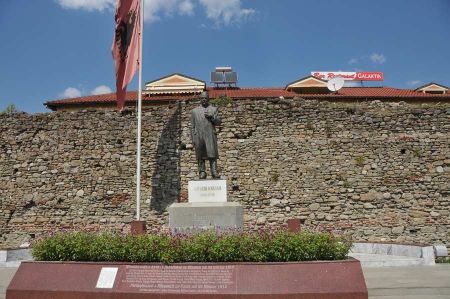 Due to the expansion policy of the Ottoman Empire in the 13th and 14th century, the Ottoman Turks also came to Elbasan, no wonder that one finds their marks in today's city architecture.

Due to its favorable location at old trading routes, Elbasan developed once again to become a center for trade and craft in the Ottoman Empire. Besides the Turkish, Albanian and Turkish merchants as well as Greek and Slav merchants settled.

Decisive under Sultan Mehmed II, who was nicknamed "the Conqueror", since he was able to organize the capture of Constantinople and other parts of the Balkans for the Ottoman Empire, the expansion of the Ottoman Empire could be developed. During several campaigns against the fortress of Kruja in northern Albania in 1466, Mehmed started to let build the walls of Elbasan fortress stronger and expand in compares to Roman times. The city received its present name "Elbasan", which in Turkish means "strong fortress".

The travels of Evliya Çelebi in the service of the Ottoman Sultan, published in his Seyahatname (Turkish for the travel book) in 1670, made an accurate description of the city. He mentioned three entrances of the city, each with double iron gates, behind the southern gate next to the bazaar was a cafe, he is explaining. Within the walls, there were 460 one and two-storey houses with tiled roofs. The city as a whole went far beyond this area and had 1.150 houses, which were described as maintained surrounded by vineyards and farms.

About 100 meters to the north in the center of Old Town, the Royal Mosque (Albanian Xhamia e Mbretit) from 1492 is situated, one of the oldest of Albania mosques. It is an inconspicuous, almost square building with a flat wooden roof. Under a white paint diligent box masonry can be seen. This technique has been borrowed from the former church. The already mentioned Evliya Çelebi found the mosque outside completely painted with religious poems in the finest calligraphy in 1670, until the 1960s, the walls were covered with red Arabic script. There were other mosques from the 17th century, which were destroyed in the campaign of atheism in the late 1960s. The King Mosque has survived this time, inter alia as a political assembly room.

The Ottoman old town of Elbasan filled with winding lanes in its center is still visible in the modern street plan and by that was able to preserve a little of its oriental character. In the 17th century Elbasan had about 2,000 inhabitants. After the defeat of several uprisings in the Balkans, the Turkish Grand Vizier Reschid Pasha has taken down most of the city walls in 1832. Even in the mid-19th century three mosques and a church were still mentioned, trade goods in the 16th and 17th centuries were mainly leather, wood and silver.

Not far away you will find the Cathedral of Saint Mary (alb. Katedralja e Shën Merise), a three-aisled basilica from 1833 with iconostasis slipped from the mid-19th century. The grown at north and south portico make the building appear even wider.
The Hamam (Turkish bathhouse) outside the walls next to the hotel Scampi already existed in the 17th century, then surrounded by narrow shopping streets, the bathroom was within the weekly market. In the 19th century it was renovated and was up in use in the 1940s. Its exterior in good condition, a description of the interior spaces is unnecessary. It was rebuilt to a restaurant after 1990.

Around one kilometer south of the castle is the Naziresha Mosque from the 16th century. Destroyed by the communist dictatorship the Namazgjah was the first prayer space of the country.

The ancient Roman Elbasan - once Scampa at Via Egnatia