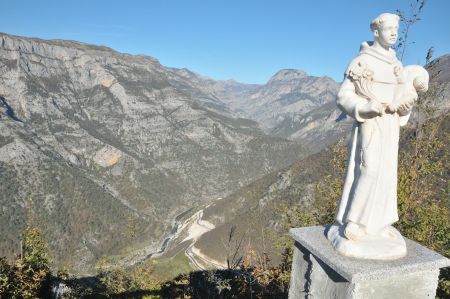 To the south-east there is the massif "Bjeshkët e Namuna", a particularly large rocky karst rock, free of water and vegetation. And exactly to this valley our friends Linda and Franc wanted to guide us.

First we head towards "Han i Hotit", the border crossing between Albania and Montenegro, where we passed the railway and couple of houses and the church of "Han i Hotit". From a huge distance already, the stone cross can be seen high up on the mountain, which can serve as a signpost. Quickly the road climbs to almost 800 meters, we stopped on the way several times, because of a wonderful view back to Lake Shkodra.

Next to the village of Rrapsh, the wide high valley in the karstic mountains opens up and little later the Cem Valley, up to 600 meters deep, joins the other end. The view, which opens to the visitor here, is certainly one of the greatest attractions in the region. Far down the Cem Gorge with its steep cliffs, surrounded by the impressive mountains of the Kelmend and a few peaks behind it, all very close to the border of Montenegro in the north. Indescribable, this view into the valley, almost reminding you to be at the Grand Canyon. In a parking lot equipped with glass floor balconies, one has the most beautiful views into the deep ravine - an obligatory photo stop. The road, which was built in the late 1960s and recently newly paved, winds down the slope in many serpentines, almost reminiscent to the Stilfser Joch in Italy.

Deep down in the valley the road winds further north-east into the center of the Kelmend, behind the peaks there is Montenegro already. We follow the valley upstream to Tamara, where nature is still practically untouched, the construction of the new connecting road is mainly at high altitude. We hear from Franc that some rafting friends have ventured on the river some time ago and have been rafting the river down from Tamara.

After several serpentines and a winding route, we reach Tamara, the capital of the region, where there is also tourist information. This is a good starting point, if you are interested in information for hikes or even want to book a mountain guide. The village is surrounded by mighty rock faces, in the heights are still a few courtyards and secluded hamlets. The village square with a short village road was rebuilt just a few years ago, so there are several cafés as well as a small shop, probably the last possibility to store supplies and a good place to buy regional products. We are offered honey of the region, but also various herbs for the preparation of tea. Of course the obligatory sheep's cheese is also not lacking. In the village itself, there are also simple accommodation possibilities. A small hydropower plant directly behind the village road provides for the power supply. We are led into a small restaurant, where we are spoiled with a freshly grilled brook trout.

A bridge with a subsequent gravel track leads to some village houses, which also lead along the red and white marked hiking trail. Behind Tamara the roads are getting worse and worse - the section to Lepusha is currently being worked on. For trips beyond Tamara, if the rain had not made the passage quite impossible, you should change to a four-wheel drive vehicle.

Valbona - mountain settlement in the valley of the same name