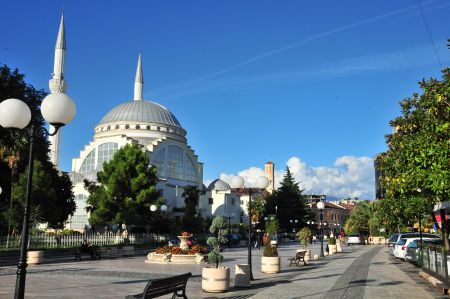 There is no doubt that the city tour through Shkodra shows the influence of the Ottomans, which is not only evident in the numerous mosques.

You might be surprised at the fact that there are sites in the city, where an Orthodox or Catholic church is located right next to a mosque - peaceful coexistence seems to be possible, even in the Middle Ages? Lived tolerance after a long period of communist dictatorship even today. Here are some more information about the time:

Three years later, in 1396, the Venetian Republic took over the power in Shkodra, which then  became part of the Venetian Albania. In 1403, the people of Shkodra rose up against the Venetian rule. During the rule of the lion republic the city flourished to a rich commercial city.

In 1479 Shkodra was conquered by the Ottomans again after a long siege of Rozafa Castle, and Shkodra became the capital of the Vilāyet Shkodra. It took a long time, however, before the city was able to recover from the destruction and depopulation of the Turkish conquest, and became an important trading place, which could benefit from the exchange between the Ottoman Empire and the rest of Europe. As late as 1614 Shkodra was described by a French traveler as a small town with barely 300 houses. The Turkish traveler Evliya Çelebi, on the other hand, describes it as a prosperous trading town with 1,800 houses (about 9,000 inhabitants, slightly more than Berlin at that time) about 50 years later. Until that time Rozafa also served as a residential district on the main road to Tirana, which was once the bazaar quarter. By the end of the 16th century almost all urban residents converted to Islam.

In 1757 the local feudal lord Mehmet Bej Bushati was declared as the Pasha of the Shkodra region. He led the political affairs almost independently, gaining more autonomy from the High Porte. However, the Pashalik of Shkodra did not reach its heyday like later on his son Kara Mahmut, who broadened the boundaries of his power to Kosovo and Berat.

From around 1770, a shift of the city center away from the bazaar took place to about two kilometers to the east into the plain at the lake shore, so that the city soon had two completely separate parts. A third quarter lay south-east of the castle hill on the bank of the Kir. After the earthquakes of 1815 and 1837, however, the course of the river, which had previously not led into the Buna but directly into the sea, changed, and the tobacco district was regularly flooded. The Laid Mosque was the most important building in the today very rural district, but was already unused after the First World War. The importance of the bazaar quarter also declined after the Second World War, so that there was nothing left of the historical substance in the 1980s.

In 1785, Kara Mahmut attacked neighboring Montenegro and was able to conquer the pirate bastion Ulcinj, whose fleet he set on fire. The West of Europe quickly became aware of him, and Kara Mahmut asked the Habsburgs for weapons and money to fight the Ottoman Empire.

But the Ottomans had to surrender to the superior soldiers of Kara Mahmut after a three-month siege of the Rozafa fortress they had held. In 1796 Kara Mahmut made another attempt to attack Montenegro, but this time he suffered a defeat and was subsequently beheaded. After his death, his youngest brother, Ibrahim Pasha, was appointed his successor. This, however, had been faithfully devoted to the policy of his brother and the Sultan. He administered the Pashalik of Shkodra until his death in 1810.

It was not for nothing that Shkodra was, until a century ago, one of the cultural centers of Albania, where the Albanian national movement, Rilindja (rebirth), had many supporters. That is why the cultural and historical heritage of Shkodra is one of the most important not only in Albania itself, but in all neighboring Albanian areas.

In 1860 Jesuits founded a seminary in the city, and in 1870 a theological high school of the Franciscan Order was established with the help of Austria-Hungary. The Austrians therefore aimed to increase their influence in the Catholic North Albania. However, the priests working in Shkodra, did not have a good reputation in the local population. They were accused of having their own advantages by the trade relations with Austria-Hungary and would benefit by the local retailers. The Muslim Shkodians, and generally the Albanians, were more than suspicious of the double monarchy. To minimize the Austrian influence in Shkodra as much as possible, Italian schools were opened in the city.

In the turbulence of the Balkan war in 1912/13, Montenegrins and Serbs claimed the city for their states. After the assassination of the Ottoman commander Hasan Riza Pasha, the Montenegrin army occupied Shkodra for some time, ending the Ottoman era. On the pressure of the European powers, the latter had to withdraw again in 1914, and Shkodra was assigned to Albania, which had just become independent. During the First World War from 1916 to 1918 the city was under Austrian occupation. After the war, the French, who surrendered in 1920, dedicated Shkodra to the young state Albania.

Until the rise of the new capital Tirana in the 1930s, Shkodra was the most important city in the country (temporarily in competition with the port town of Durrës). In the 19th century more than 40,000 people lived here. The many Catholic inhabitants had strong relations to Italy and Austria, which was conducive to development, so Catholic monks had also opened various schools.

Tour through the Kelmend into the Cem Gorge