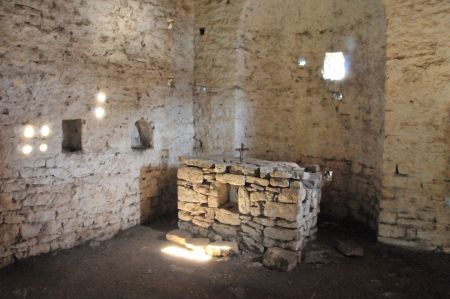 The next day at Legjenda Camping should bring another surprise for us, because Linda and Franc invited us to a special boat trip to Shurdhah Island (Albanian: Ishulli i Shurdhahit).

The island is located in the Vau i Dejës Reservoir in northern Albania, which is fed and drained by the river Drin. With the construction of the dam and the water stored in it, the largest island in the artificial lake with an area of 7.5 hectares has been built next to other islands. From the northernmost tip of the island to the southernmost point, it has a length of 390 m. The island is covered by trees and shrubbery but also contains some historically interesting buildings hidden under the bushes.

With the completion of the dam in 1973, Shurdhah not longer was a settlement next river Drin, it became an ancient place on an island. Archaeological studies have shown that the Illyrian settlement of Sarda once stood right here on the left bank of the river Drin.

Later the name was changed to Shurdhah, which means "deaf" in Albanian. It is rumored that the citadel received this name because of the wind that swept through the valley what makes listening very difficult. Sarda was founded between the 6th and 8th century BC, long time before the Roman era. The city was strategically well situated on the old road from Shkodër to Gjakova and served as a resting place along the already existing commercial street. The city of Sarda reappeared and became rich between the 8th and 13th century and developed into an important cultural and religious center.

Within the city, so at least the mythology says, there have been 365 altars, each dedicated to another saint and the place was the residence of noble family Dukagjini. Leka Dukagjini was also known as the "angel's prince", the ruler of the northern Albania, and was just little dependent on the power and influence of the Skanderbeg. Dukagjini is also famous for the creation and enforcement of the laws known as Kanun today, but later on more on that topic. Sarda, at the height, was at its height of importance in the 12th century when it became the seat of the Bishop of Sapa and Sarda. Here, too, traces of the foundations of a Roman fortress with the oldest remains from the 6th - 8th century AD were discovered.

After arriving at the lake, we were looking for a fisherman to bring us to the island in his motorboat. After a lovely sailing, we were able to visit the ruins of the 11th century medieval castle, two rings of walls and towers (some are sunk with the rise of water in the lake), the remains of a Byzantine church and other medieval walls. Impressive is the location and the prudence of the steep cliffs that stand out from the lake.

The city of Sarda was devastated by the Ottomans in 1491 so that the inhabitants did not resettle them. The name Sarda changed to Shurdhah later on when Albania became an atheist-communist state because the name should be forgotten because of the strong religious connection to the heyday. Today religious processions again happen so that the main building with the small stonemade altar being used for events.

Shkodra - Middle Age and Ottoman traces in the city