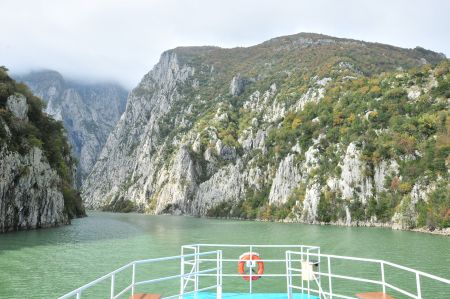 Almost as before, the preparations for many camping and vehicle exhibitors, travel agencies and other participants have already been completed, as the start of the trade fair will start soon (14 - 22 January 2017) in Stuttgart.

Now everyone is preparing for the journey from different places, which partly will take several days. During this year, it is not that easy due to strong winter in January, just remind yourself of the strong winter that has appeared with snow, even in Greece and on the Balkan routes. Thus, the route is now again open for discussion, whether using the national highways which are well developed via Skopje, Nis, Belgrade, Zagreb, Ljubljana and Salzburg, or along the surely snow-free route passing Budva, Dubrovnik, Split and possibly Italy along the coast of the Mediterranean.

This is how the family Franc and Linda Nikaj from the Legjenda Campsite in Shkodar is thinking, who will be arriving from Albania under the official representative team. In addition to a traditional restaurant, the couple began to set up a campsite conveniently located near the main road from Shkodar to Tirana a few years ago. We had visited the place several times, also very gratefully enjoyed the support of Linda and Franc to the exploration of the direct and further environment at the Shkodar Lake, for sure we also talked about the upcoming CMT fair and planned some meetings. In the run-up to create the tourist delegation in Tirana, the event had been prepared in several meetings, where the individual destinations and the possible activities in Albania were discussed. Not to forget, Camping Legjenda will be starting point for our partwise guided tour through Albania, Macedonia and Greece in April this year.

Many travelers from Western Europe do not really experience Albania as a travel destination so far and the possibilities for activities are largely unknown. This is mainly due to the Communist past under the dictator Enver Hoxha, who had largely blocked the country for many decades. Only the position to Italy on the Mediterranean Sea is known, which implies long beach sections and bathing possibilities and the sun-drenched summer tourist can count on this. However, the almost unaffected natural areas, which are predestined for hiking, mountain biking and other outdoor activities, are largely unknown. There are extensive national parks, almost untouched valleys in the Albanian Alps, as well as interesting relics to be explored from the complex past of the country of Albania, whose effects can still be seen today, either from Roman times or under Ottoman rule, Albanian's national heroes Skanderbeg, to whose honor a National Museum was established in Kruja.

Have we aroused your interest? Then you might come to the CMT to Stuttgart, where you will get to know the extensive possibilities of the uprising travel destination Albania, which is still little known so far, and not yet is oriented towards mass tourism too much. Please read our so far published texts about Albania:

Enjoy your next trip!