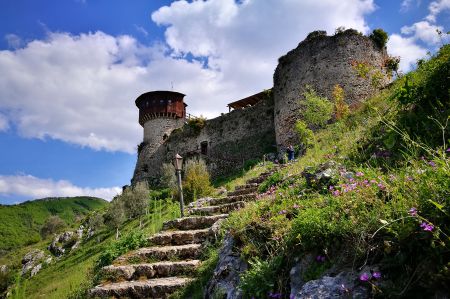 After the really interesting cave exploration in a side valley next to the road from Tirana to Elbasan, we finally wanted to visit the Petrela castle on the hilltop south of the river Erzen, about 500 meters above sea level.

Petrela (Albanian also use Petrelë) is actually a farming village, only a few minutes' drive south of the camper stop at Baron Hotel in Tirana. The old country road from Tirana to Elbasan connects the place across the main road SH3 along the river. From the large roundabout of the new city motorway, it is only a few kilometers to Petrela, where we parked our vehicle in the town center.

Petrela is famous for its castle, which in the 14th century was part of the defense system of the Albanian prince and national hero Skanderbeg in the struggle for freedom against the Ottomans. The castle lies on a pointed mountain west of the village, overlooking the entire Erzen valley. From here the traffic routes were controlled via the Krraba Pass. The first fortifications probably date back to before the 3rd century from Roman times, but there are still traces of their fortifications on the spot. The small fortress dates back to Emperor Justinian, who had the rock fixed to protect Dyrrhachium, today's Durres, from this side. The oldest building is the tower, the lower part of which goes back to the 5th century.

In the 9th century, the complex was expanded and served as a base for the numerous local rulers of Central Albania. Later an outer enclosure wall was added, which secured the rather small, but defensive castle on the top.

According to the legend, the Albanian prince Skanderbeg should have left the castle as a gift to his sister, since she has always supported him actively in the struggle against the Ottomans. In the Middle Ages, Petrela belonged to a chain of castles that Skanderbeg expanded to secure the fortress of Kruja. On clear days you can look from Petrela to the castle of Kruja.

In the tower of the castle around the year 2000 a restaurant was set up, which had to commit itself to the preservation of the castle´s walls and buildings. As the cost of maintaining rose steadily, it was agreed that the castle´s garden could also be used as a restaurant. Due to the superstructures, however, the historic building was greatly altered. The restaurant and the castle today bring visitors from Tirana to the village and into the castle, tourists are still rare.

Another fortress called Persqop on a mountain east of the village dates back to the Illyrian era (3rd and 2nd century BC). However, only a 30-meter-long and six-meter-high fragment of the stone wall is preserved. A grave was also discovered in the castle.

The name Petrela is probably a mixture of the ancient Greek petra and the Latin alba and in the meaning white stone.

We enjoyed the view into the valley of the river Erzen, the blossoming in the castle courtyard and, of course, our well-deserved afternoon coffee after a strenuous hike to the cave, which will be followed by another report. Stay interested.

Kruja - center in the struggle for freedom against the Ottoman