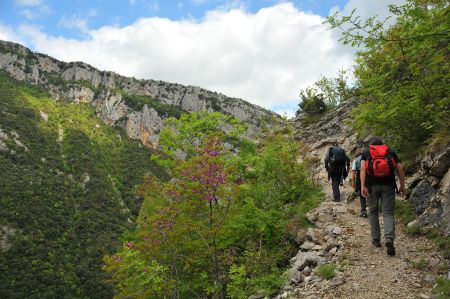 From our location Camper Stop Hotel Baron, we, headed by Florian, went from Tirana a few kilometers into the direction of Elbasan.

As the Camper Stop Hotel Baron is easily accessible on the outskirts of Tirana and can be easily reached from both the east and the west by two roundabouts of the city motorway, the location is a good way to avoid the stressful traffic in the city center.

In various tour guides we had occasionally heard about hiking possibilities in the surroundings of Tirana as well as about the Pëllumba cave, but without a real idea. Florian, too, was a great help again, since he had already made his way to the cave before our exploration, but without entering it.

Shortly after the passage of the Petrela castle, a section of the motorway towards Elbasan was finished already, which we could use up to a roundabout back on the old highway, then the road branch went to the village Pëllumbas, where there is a large plaques with maps and detailed information of the way to the cave there.

The path first led along some village farmhouses, then a part through beautiful olive groves along a dirt road and then on the well-developed hiking trail, which even showed some railings as the terrain became more and more impassable. In some steep parts steps were worked into the mountain, partly with wooden pieces fastened and filled with stony materials.

The hike to the Pellumba Cave, also called Sphella e Zeze (Black Cave), is a very interesting excursion into the upper Erzen valley. The higher we got on the trail, the more imposing were the impressions, a beautiful valley only 10 kilometers outside of Tirana. After about 2.5 kilometers on the narrow footpath, high above the southern river side, we had reached the cave entrance.

Since a local initiative had taken the duty to work on the trail a few years ago, the route is well signposted and can easily be passed even by children. In an hour we had reached the platform at the cave entrance, on the way there were several view benches and picnic areas, from which one can enjoy the view of the ore, which is called Skoranes in the upper section.

There is no question, of course, that good hiking shoes are a prerequisite for reaching the entrance to the cave, at least equally important when entering the cave itself, because the ground is partly muddy and very slippery. Since there is no electric lighting, good flashlights, better good headlights are of great help. Without these, the attached pictures could not have been made at all.

After the first 40 meters in the cave, it becomes darker and darker, listening to the sounds of the countless bats, observing a reflective band on the ground, and following a path deep into the cave, which is about 360 meters long. The individual halls of the karst cave are up to 38 meters high, where there are countless stalagmites and stalagmites to admire.

The Pëllumbas cave is quite impressive: about 300 meters deep, slightly angled and sticky, so that one was glad about the glittering band on the ground with so different stalactites and stalagmites and other impressive formations, with loud bats and quiet fists, far from the light. The silence, aside from the space with the bats, which ruled under the earth, was indeed only a fifth in the cave. Unfortunately, not all visitors were ruthless in dealing with this natural condition and had left their names on the rock or taken parts of stalagmites as a souvenir.

Archaeological finds, such as stone scrapers, flint stones and ceramics show a settlement of the cave from the Paleolithic to the Middle Ages. Even bears have used the cave for their winter sleep.

We really enjoyed the cave exploration, though dirty on shoes, pants and hands, but we felt like real cave explorers. A great trip with a wonderful hike through a natural landscape.

Ascent to Petrela - Coffee break in the castle´s garden