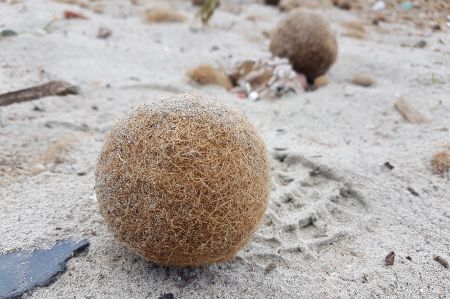 During our tour through the city through Durres, we decided to take a stopover on the waterfront of Durres, also to consume our lunch packages.

Almost all our excursions started after a rich breakfast in the morning, in order to use the day as much as possible. So the lunch pack was always a good solution as a meal between and finding an interesting place for it, is always possible.

Having arrived at the promenade, however, thousands of ball-like things excited our attention much more than the lunch packages. Thousands of these balls formed an almost closed surface on the beach. At first we were confused about the question of what it is, then remembered what Robert Krickl from Vienna is offering by his facebook account "natur - was wie wo", so we quickly took a picture, posted it and a little later there was an answer already: sea balls!

Sea-balls are usually round, fibrous-felted structures, which can be found all over the world on beaches, where they can occur particularly after spring and autumn storms. They are formed by the rhizome of grass, which is ripped out by the water movement, the fibers of which are moved to and from the sand floor by waves and currents, and thus become spherical. On Mediterranean beaches there are often large sea balls from the dead parts of the Neptune plants. Depending on the circumstances and the species of sea grass, sea balls can be very different in size - usually between the size of the coin and tennis ball.

The first descriptions of sea-balls already appear in 1216 by Moorish scholars in Andalusia who were interested in their medical effect. In the Economic Encyclopaedia (1773-1858) the trade of sea-balls for medicinal purposes was reported: "It is often found in the Mediterranean, and brought to Venice, though it may be found in the ocean, and even in standing waters. What it is, and where it comes from, the differences opinions are so different as doubtful. Some suppose that it is made by humans, others, that it is a coagulated sea-foam, and again others think, it is produced in the stomach of a fish from the cedars of the consumed reeds, to which the latter are added. They possibly have some medicinal benefits, and for this reason they are administered by the pharmacists; but to-day they are just little needed."

According to Bruno Schröder, an expert on sea balls, they were primarily used for their iodine content, against crutches, but also for skin diseases.

Even in the nineteenth century the view was circulated that sea-balls were formed in the stomach of fish by swallowing indigestible sea-grass, similar to bezoars, which can be formed from undigested hair in animal-mangers.

We were quite satisfied with the information now available and could now enjoy our lunch package. By the way, Durres is a very popular destination not only because of the Roman buildings and its sea-balls.

Durres on the Via Egnatia - City tour and Roman History