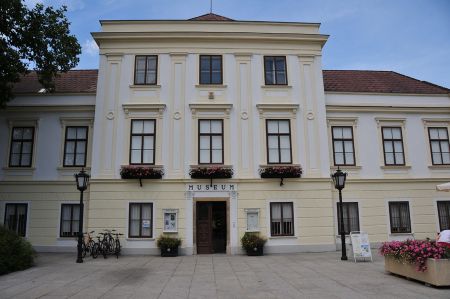 At the end of our tour through Mödling, Robert introduced us to the local museum, which gives an insight view into the history of the town as well as into the surroundings places and into the past too, when the area was connected to an ocean.

Similar to its time in Turkey, where we were lucky (in the Taurus on the outskirts of Central Anatolia) when we encountered fossil shells in Mut, at least 600 meters above sea level, we were surprised because of some finds in the Museum of Mödling. Who ever is expecting fossilized shark teeth, found in the vicinity of Mödling.

Many other finds also show interesting artifacts and maps of marine biology, the complex fauna and flora that once lived here in the basin of Vienna and the surrounding lime mountains, before the earth layers lifted up so massive.

The first settlements of human beings date back to the Neolithic period, as grave finds document in a double burial place. Many finds were also made on the Kalenderberg and the Jennyberg, both from Hallstatt time. Next to the train station Roman coins and a grave were found. Not far away East Germanic graves were found, which refer to the inhabitants of the region after the retreat of Rome. A Langobardian burial ground in the south of Mödling testifies the settlement of the Langobards, which settled here towards the end of the migration period, before the mass of this people moved on to Pannonia and finally Italy, leaving the Avars in the Carpathian Basin. The urban area of ​​Mödling remained populated during this time. This was demonstrated by excavations of a grave field with more then 500 graves at the golden stairs (place next to Mödling). Grave attachments and completely preserved skeletons are exhibited in the museum of the town. After the victory of Charlemagne beating the Avars in 803, the settlement from the Bavarian-Franconian region began.

The first documentary mentions dates from the 8th of September 903 in the course of an exchange of goods between two bishops as MEDILIHHA ULTRA MONTEM COMMIGENUM. Afterwards, Mödling was for some time seat of a side line of the Babenberger on today's castle ruin in Mödling. In 1177 Henry the Elder, the son of Henry II Jasomirgott, obtained the dominion that encompassed an area from Liesing to Piesting and Bruck. This is attested by documents which are located at Heiligenkreuz.

When the time of the ruling earls was more changing to be interested in art and culture than in ruling, Walther von der Vogelweide was often also here. The Spitalkirche and today's St. Othmarkirche were built in the 15th century, the Karner was erected towards the end of the 12th century. Already at this time, Mödling was a significant wine town, beside Langenlois one of the most important in all of Lower Austria. Under Duke Albrecht II, Medlich, as it was then called, was raised to the market in 1343.

During the first Turkish occupation in 1529, a large part of the city was destroyed for the first time. In 1679 many inhabitants died of the plague. During the second Turkish encampment in 1683, a large part of the inhabitants were killed. However, a revitalization by settlers from Styria, to which the Styrian Panther in the heraldic shield is still reminiscent today, succeeded. As only 22 inhabitants died during the second plague epidemic in 1713, the Trinity Column or Plague Column, as it is called today, was built as a thanks.

Mödling - on the edge of the Viennese basin with Robert

We have 466 guests and no members online