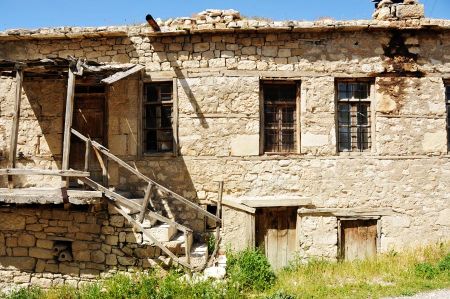 We went to Karaman again with regard to preparation of the 2011 Paragliding Weeks. Here, the district governor drew our attention to the ancient city of Claudiopolis and invited us to see the district centre called Mut and its vicinity. This region is especially famous for growing of Mut Apricot, which is an aromatic apricot type.

After thinking for a short time, we decided to make use of this opportunity. Only a distance of 140 kilometres need to be covered to Mut district centre via the highway no 715, which constitutes the main connection route between Konya and Silifke. Mut, which holds a population of approximately 29.500, possesses rural vicinity and only 64.000 people live in this region in total. Mut is situated at the foot of Sertavul Pass, the historical significance of which goes back a long way and poses a typical example for small cities that mostly bear agricultural feature today. Historical significance of the pass concerned results from trade conducted with Konya (and therefore Silkroad). Commercial products were transported to Mediterranean harbours, notably Silifke and Anamur. The commercial path followed within this context passed along Göksu River via Mut.

Today, this city is included in the province of Mersin. Many coast dwellers who migrate to higher and therefore cooler regions, in other words mountains, in hot summer months use this path. It is possible to see the whole neighbourhood residents coming from metropolitans such as Mersin and Adana here during the long summer vacation that lasts long in Turkey.

When you follow Ermenek Stream, which progresses in the direction Ermenek upon separating from Göksu River on the highway no 340, you reach Gezende Dam Lake after approximately 30 kilometers. This dam collects waters of Ermenek Stream and uses it for electricity generation. This hydroelectric plant, turbines of which were manufactured in Romania, constitutes a recreation area that is popular and located at a short distance today. This area, which has wide forestlands, accommodates numerous wild boars and other animal species. These spaces, which are expressed to be of extraordinary beauty in terms of land structure, are very appropriate for exploration. The ones going to see them do not lose anything.

There was a settlement in the surroundings of Mut even in Hittites period. Therefore, it is no wonder that Romans established fortified settlements here. One of the most famous settlements is Claudiopolis. It was located in a Roman state which is identified as Cilicia and commercial caravans that take off from Silifke reached there after a two-day journey. Later, the name of the state was changed as Isauria. Today, although not active, it is still regarded as the episcopacy of Roman / Catholic Church in title. Here, it is possible to see the remnants of a Roman theatre and necropolis, isolated elements of buildings which don't exist anymore (used in other buildings), for example the ornamentations on column remnants, column heads and statues.

After the Romans, Armenians came and established Cilicia Armenian Kingdom in the region. Until the Greek/Orthodox Karaman people established a new kingdom in 13rd century. Today, two important structures located in Mut are from those times that we mentioned: Laal Paşa Mosque and Kızılminare (Red Minaret). According to legends, the tomb of a folk poet named Karacaoğlan is also located here in Mut. However, some of the other cities also make the same claim.

We were extremely pleased with our journey to Mut. Thanks in no smart part to its rural environments which weren't spoiled. For this reason, we decided to come back again to make more discoveries and provide information.