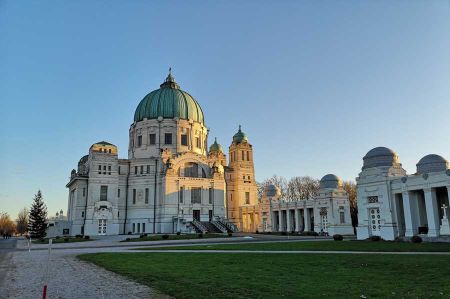 Every city, like every country, has its own bizarre peculiarities, so we were more than surprised about the central cemetery in Vienna during a conversation when we found out that the cemetery is also used as a park and green area by the Viennese.

Yes, it does go so far that joggers use the huge park for their runs almost every day and bookworms devour the latest bestseller in a relaxed and calm atmosphere, provided the weather is good. The central cemetery also belongs to the eastern green and recreation belt of Vienna. Due to its size and the partly dense tree population, it even houses a diverse fauna. The most common are the many squirrels, which the Viennese call "Hansi" and are comparatively trusting, since they are often fed with nuts by cemetery visitors. Less well known are the largest "animal inhabitants" of the cemetery, around 20 deer, which are mainly found on the site of the old Jewish cemetery, not least because of the evergreen plants growing around the old tombstones, which are particularly reliable in the colder seasons as food source. In addition, the central cemetery offers a habitat for kestrels, hamsters, badgers, martens, frogs and other small animals.

Until the mid-1980s, the cemetery area was even an official hunting area and the animal population was controlled by hunters appointed by the forest administration. Nowadays attempts are made to maintain the ecological balance even without the use of rifles by the environmental protection department of the City of Vienna, which with its nature and habitat protection program Network Nature ensures that, apart from the well-kept avenues and rows of graves, overgrown, near-natural areas are also preserved.

Traffic in and at the central cemetery 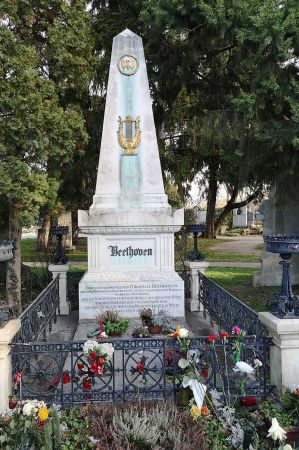 We use Simmeringer Hauptstraße, probably the most important traffic artery in the Simmering district, before there was new access from the city center to Vienna Airport with the construction of the motorway and the Rennweg in front of it. This part of the historic trunk road to Budapest leads directly to the central cemetery and thus makes a significant contribution to its accessibility. The closer we get to the cemetery, the closer the stonemason shops, the flower shops and other companies connected to the ongoing cemetery business become.

We have an appointment with our friend Bertl, who has not been there when we arrive. We use the time to get a first overview, so we also notice the souvenir shop right at the entrance portal. We enter and a young woman asks us about our plan. The slightly bizarre approach to the way of thinking about life and death quickly becomes apparent again. After information about the museum that deals with the tomb and burial culture of history and the belonging to the different religions and believes, there is also a reference to a beautiful café right next to it with a curious slogan: "Enjoy your coffee and stay forever!"

We are astonished a little, we have never encountered such a way of dealing with death (what is in the coffee to stay forever could come to mind). We decide to skip the café for today, despite the tempting offer of various, deliciously scented drinks and fresh pastries and cakes.

Our view then goes to the souvenir shop (which cemetery worldwide has a souvenir shop) and remains attached to the T-shirts on display: Zentralfriedhof - you are correct laying here for ever! it says. A completely new perspective opens up in front of our eyes.

The coffeehouse mentioned above has been housed in one of the historic pavilions on the initiative of the cemetery administration since April 2018. With windows and sidewalk garden it opens up to the cemetery grounds. In the building there is also the info point, a computer terminal to find the locations of grave sites, which makes perfect sense.

The central cemetery has considerable distances due to its size. It´s main routes can also be traveled by car for a fee because of that. On November 1st (All Saints' Day) entry is not permitted, as the risk of traffic chaos would be too high on this day. Persons with a corresponding disability card are generally exempt from fees and may also drive into All Saints' Day.

The cemetery has had its own cemetery bus since 1971 to make it easier for people without a car to reach remote graves. During the day, except on All Saints' Day, it crosses the majority of the cemetery grounds every half hour from Gate 2 as a circular route and serves 19 numbered stops. Around 60,000 passengers use this transport service every year. The various stops in the park area say all about the seize already.

Historical grove and graves of honor - Falco is one of them 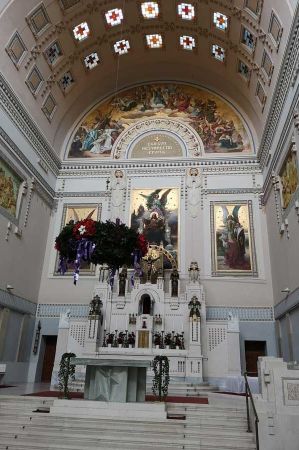 However, one of the most frequently visited tombs by tourists, that of Wolfgang Amadeus Mozart, is only a memorial, since the remains of Mozart are in the St. Marx cemetery (where the exact location of Mozart's tomb cannot be determined, however, due to the Josephinian I reforms buried in a shaft grave).

The Ehrenhain in group 40 houses honorary graves of mostly deceased personalities after the 1960s. By far the most visited grave in this group is that of the pop star Falco, who died in 1998 and has become a real pilgrimage site for Falco fans.