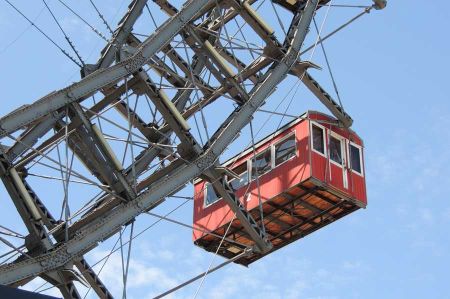 Anyone who has ever visited the capital of Austria, Vienna, will certainly have a very extensive art and culture program ahead of them and must definitely focus, especially when time is limited.

A ride on the Vienna Giant Ferris Wheel, Vienna's landmark that can be seen from afar, is part of the fixed Vienna program just because of the age of the Giant Ferris wheel, as is a visit to Schönbrunn, St. Stephen's Cathedral and the Lipizzaner. The Vienna Giant Ferris Wheel is also an important symbol for the world-famous Vienna Prater, because with its silhouette that can be seen from afar, it is a special attraction for all visitors to Vienna. A tour of this important and at the same time fascinating building and of course the unmistakable view over Vienna make the Ferris wheel a cultural and architectural must-see experience for every visitor to Vienna.

Wiener Riesenrad was opened in 1897 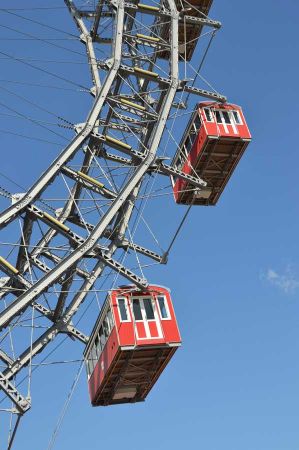 The Vienna Giant Ferris Wheel in the Prater amusement park in the Leopoldstadt district is still a sight and an important landmark of the city of Vienna. It was built in 1897 to celebrate the 50th anniversary of the throne of Emperor Franz Joseph I and at the time it was one of the largest Ferris wheels in the world.
The Ferris wheel was planned in 1896 by the English engineers Walter Bassett Basset and Harry Hitchins and originally built with 30 wagons on a plot of land on the Prater site leased by Gabor Steiner, the actual "father of the Ferris wheel". Hubert Cecil Booth was involved as the executive chief designer. Walter Bassett Basset himself advanced the construction costs of 500,000 kroner and subsequently evidenced the financing costs in shares (£ 45,000) and a bond of £ 10,000 from the English company "Wiener Riesen Rad Limited". The wheel was set in motion for the first time on June 25, 1897, but it only performed half a turn so that the upper part could be brought down and assembled. It was opened in 1897, one year before the 50th anniversary of the throne of Emperor Franz Joseph I. The official inauguration of the Ferris wheel took place on July 3, 1897, a hot summer day on which the Viennese visited the Prater grounds in large numbers. However, very few were likely to have been able to raise the eight guilders that a ride on the Ferris wheel cost at that time. At that time an official earned about 30 guilders a month.

Change of ownership due to the chaos of war 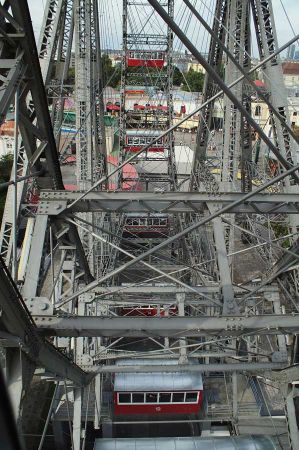 During the First World War, in 1916, the British owner of the Ferris wheel, Walter Basset, was expropriated and the attraction was put up for auction. It was not until three years later, in 1919, that the Prague merchant Eduard Steiner, who was not related to Gabor Steiner, bought it.
In 1938 the Ferris wheel, like all of Eduard Steiner's property (and also that of Gabor Steiner), was "aryanized" by the National Socialists. A year later it was placed under a preservation order. During the Second World War, the ferris wheel was almost completely destroyed by fire and bombs and burned out in 1944. In the same year Gabor Steiner died in exile in Beverly Hills. Eduard Steiner, the last legal owner before the "Aryanization", was murdered in 1944 in the Auschwitz concentration camp. In 1953 the Ferris wheel was restituted to three Steiner heiresses. 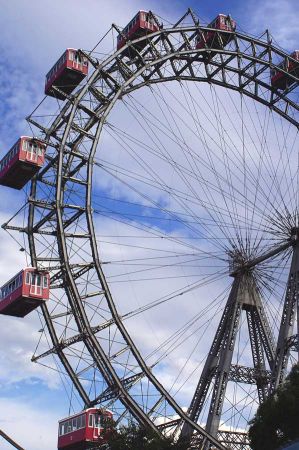 Because of the fire damage caused by the war, it was assumed after 1945 that the Ferris wheel's stability had suffered. Therefore only 15 of the 30 wagons were reattached. For cost reasons, only 4 instead of the original 6 windows were installed. As recently as 1957, when the owner had old wagons replaced on the occasion of the 60th anniversary of the ride, the number of 15 wagons was kept due to insufficient frequency.

The Ferris wheel with 15 wagons became a symbol of the reconstruction. Since 2002 there has been an exhibition hall called the “Panorama Museum” with eight replica wagons in which the history of the Vienna Prater is presented.

In 2016, the 15 wagons began to be exchanged for new ones, which were built according to the original plans from 1896/97. Back then the wagons had six windows on each side. The Vienna Giant Ferris Wheel has the shape of a triangle with a total diameter of 60.96 meters, which corresponds to the diameter of the suspension axles of the wagons. The outer wheel diameter is 55.78 meters (183 feet) and the inner wheel diameter is 49.68 meters (163 feet). The highest point is 64.75 meters above the ground.
The weight of the rotating structure is 244.85 tons and the total weight of all iron structures is 430.05 tons. The axis of the Ferris wheel is 10.78 meters long, 0.5 meters in diameter and weighs 16.3 tons. It is driven by two motors with an output of 15 kilowatts, which are connected to one another via a shaft. They drive two flywheels via belts. The drive force is introduced into the two cable drives on the outside of the wheel rim via belt pulleys and a two-stage gearbox, the torque is transmitted via friction shoes. The rope is kept under tension by a 3.5 tonne weight. Although either of the two motors could move the wheel on its own, two other, smaller motors are integrated into the drive system for safety; the power supply maintains an emergency generator in the event of a power failure. Ultimately, the power transmission system is designed so that the Ferris wheel can even be turned by hand.
The circumferential speed of the Ferris wheel is a maximum of 0.75 meters per second (2.7 kilometers per hour), so the time for one complete revolution is 255 seconds. The actual duration for one revolution is much longer and depends on the number of passengers, since in the longest case the Ferris wheel is only moved the distance between two wagons in order to allow passengers to get on and off.
Even if you don't enjoy the amusement park-like structures, the Ferris wheel is always worth a visit just because of its history. Have fun.

Salamis on Cyprus - ancient town kingdom near Famagusta
A first visit to Norwich - it will not be the last!