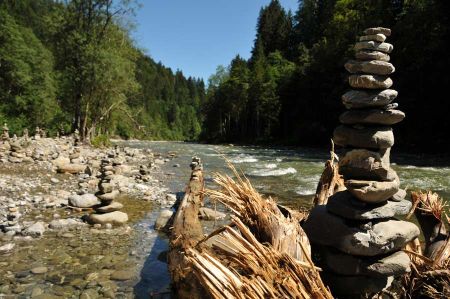 Similar to the day before, we were getting up again by the first daylight that penetrated the caravan through the skylight, as well as by the noise appearing from Breitach creek next to the campsite.

At the very end of the valley next to Baad, the waters of the various streams from the surrounding mountains are collected and then form the Breitach creek. Coming from Baad, the Breitach then flows down to Mittelberg and Riezlern, where other creeks such as Derrabach, Turabach, Bärgundbach, Gemstelbach and Wildenbach are added. The creek slowly turns into a river that has carved a deep canyon into the rock at the Walserschanz since thousands of years, the well-known Breitachklamm. The Breitachklamm was an important destination for us long before we arrived already. The Breitachklamm was just formed during the last 10,000 years after the Würm Ice Age when glaciers had removed the soft rock and the hard rock remained. When the glaciers had melted, the Breitach had to drill a way of about 2.5 kilometers in length and about 150 meters deep through the hard rock through the course of thousands of years until it could arrive at the exit of the Kleinwalsertal near Tiefenbach in Allgäu. The Breitachklamm is - next to the Höllentalklamm - the deepest gorge in the Bavarian Alps.

We once again used the free Walserbus line 1 coming from Baad to the Walserschanz exit point to hike down into the gorge.

Already at the end of the 19th century there were several attempts to make the Breitachklamm accessible in order to develop a source of income for the predominantly poor local population. They all failed at first. The young pastor Johannes Schiebel from Tiefenbach then took the development of the gorge into his hands, looked for donors and founded the Breitachklammverein eG. He did this with the motivation to open up an additional source of income for his poor community and thus to stimulate the beginning of tourism. The first demolition was carried out on July 25, 1904 and about a year later, on July 4, 1905, the accessible Breitachklamm was inaugurated, which today attracts around 300,000 visitors a year.

We use the hiking trail that leads down into the gorge next to the restaurant on the Walserschanz. The mighty rushing noise can be heard well before reaching the river, even when the water masses are much lower than at the time of the snowmelt.

Hiking trail leads into the gorge of Breitach And then the bank in the gorge is reached. The rocks rise mightily on both banks. You go deeper and deeper into the gorge crossing footbridges along the rocks, some of which are really adventurous paths. Then again the narrow path has been directly carved out of the rock. Sometimes you are high above the river, then again right next to it.

Constant rushing and roaring of the water, eddies and holes into which the raging water threatens to disappear. Then again mighty dead wood that was washed down the raging river as flotsam until it becomes wedged somewhere. In between rockfalls that got caught high above the footbridge in the narrow gorge valley. An indescribable spectacle that nature has written here. On the way we also come across a marker construction that shows some of the high water levels in the Breitachklamm. The force with which the water washes through the gorge is hard to imagine. If you then look at the tree trunks, some 10-20 meters long and 80 centimeters in diameter, wedged like huge arches, the energy output becomes clearer. It's just amazing what hydropower can do.

We also start the way back through the Klammtal, but then decide to follow the course of the Breitach back to the Kleinwalsertal. Here, too, footbridges are initially attached to the steeply rising rock faces until the valley widens. We use a flat part of the bank to take a short rest and refreshment break. Other hikers and some children have discovered this place on the bank and use the wonderfully clear water to play or to erect stone pillars, a leisure activity that we will find in many other places along the Breitach. An almost peculiar, new landscape is thus created on many gravel banks along the Breitach. Impressive small structures that sometimes show almost artistic ambitions and a variety of materials. Our path continues through the Breitach Valley, which has been left really natural until we come across a narrowing of the valley again in Riezlern. Here too there was once a breakthrough caused by the rocks. Today it is an interesting wooden structure that guides the hiker along the rock walls through this canyon. A little later we reached the center of Riezlern and spontaneously decided, also due to the clearing of the weather, to take the Kanzelwandbahn up to the mountain of the same name, a 2,461-meter-long cable car with gondolas that can accommodate 6 people and overcome an altitude difference of 870 meters.

Lifts open up to bring more tourists to the mountain peaks The Riezlern Tourism Advisory Board first considered building a railway on the 2056 m high pulpit wall as early as 1952 due to the increasing numbers in tourism. Kanzelwandbahn AG was founded on March 6, 1954, construction work began in 1954 and the maiden voyage took place on April 2, 1955. There were total construction costs of 3.8 million DM.

The free-standing inlet frame of the mountain station is striking. In 1956 a mountain restaurant was built at the mountain station in order to be able to cater for the increasing flow of tourists and winter sports enthusiasts. Six people at a time are transported to the summit in red, yellow or blue cabins at a speed of five meters per second, which is 320 people per hour.

In the same year, the Zweren lift was opened for winter sports enthusiasts and could transport 180 people per hour.

In 1973, when the Fellhornbahn was completed, the two ski areas were linked. The Zweren lift was expanded and now carried 690 people per hour with double bars. There were also two Bierenwang lifts. In 1976, a further 2.4 million DM were invested in increasing the capacity of the railway from 350 to 480 people per hour. In 1988 it was improved again at a cost of 15 million DM and now transports 1,500 people per hour up the mountain. 67 so-called electrants, combined systems for the water and electricity supply of the 15 snow guns, were installed along the track. A sun terrace for 200 people with wind protection was built and the Zwerenal lifts were expanded to create a six-seater chairlift.

In 2008, 6 million euros were spent on the snowmaking system. First of all, a snow pond with a capacity of 58,000 cubic meters of water was created below the mountain station of the Kanzelwandbahn and 6 kilometers of pipes were built into the ground. With the system, the slopes of the Fellhorn and Kanzelwand lifts can be completely covered with snow within 70 hours using a system of pipes and snow cannons. 3000 cubic meters of snow can be produced in one hour, which corresponds to around 300 truck loads. Today the Kanzelwand, Fellhorn, Walmendingerhorn and Nebelhorn lifts have joined forces to promote the Oberstdorf and Kleinwalsertal region under the name Das Höchst. It is possible for tourists to use all 4 cable cars with their Walser Card, which in summer makes it easier to hike the various tours in terms of difficulty and length. Due to the delayed time, today, once we have arrived at the viewing platform, we limit ourselves to the ascent to the summit cross of the Kanzelwand.
From up here, the hiking trails as long paths on the mountain slopes, the individual lifts for skiers in winter and the connecting paths to the Fellhorn are very clearly visible. An imposing area that not only attracts thousands of visitors in winter, as we notice at another small Vesper on the summit. In the terrain, on the other hand, the large number of mountain hikers run away very quickly, because the terrain is very spacious. The hikers just meet again at the huts. We have also planned further hikes for the next few days, perhaps from the Fellhorn wall or from the Kanzelwand.

Please read as well:
Icy cold Brocken - hiking the Blocksberg
Danube Cycle Path - Vienna Region is one of the highlights