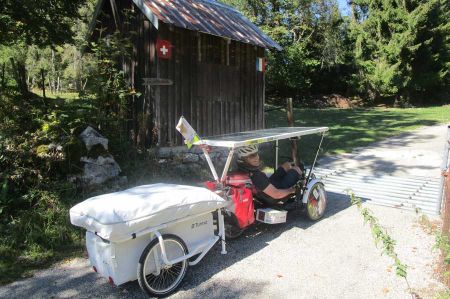 Tinkerers and hobbyists are numerous - sometimes you do it off with a tired smile, then again you are amazed about the basic idea and then there are those who really implement their creative ideas into reality and .... use them too.

So we were not just surprised, but full of admiration too, when the attached pictures of a trike bike with solar field on top and with the mini-caravan fixed to it arrived at the office. Several times we had already reported on the bike trailer mini-caravan or BTurtle, where the particular advantages of a fast-inflatable tent above the loading area independent allows cycling with overnight on the way to be mentioned as the main advantages. Critical voices then had their say and talked about the laborious inflation by hand pump, a cordless pump would be desirable here. No problem. And what about light? This is also the subject of intensive work, according to the manufacturer. 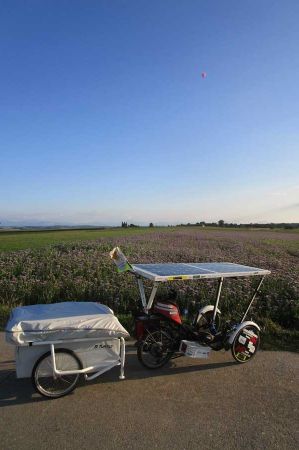 And now these pictures and some of the points that will take the wind out of the sails of critics of e-bikes. So there are cyclists who deliberately reject any support by electric motors, because it means, yes correct,  additional consumption of electricity whose origin is often doubtful or even harmful to the environment. The inflation of the tent with the help of a battery pump was rejected by many with the same disapproval. But what if the required energy is gained on the way? Be it for the e-motor for power assisting the cycling, whether to recharge the battery of the pump or for the evening light in the tent. Some of the often mentioned and indeed correct arguments would have swept away.

Dear Jean-Yves, we thank you: a for the wonderful pictures, b for the great idea and putting it into practice.

The recumbent tricycle, also known as recumbent trike or short Trike, is a generally three-lane recumbent, which is built in two different basic types. Most common is the design of the type "Tadpole" with two steered wheels in front and a rear wheel driven. The somewhat rarer design with two wheels at the rear and a steered front wheel is called "Delta". When Delta is usually one of the rear wheels driven, rarely both rear wheels (then with differential gear) or the front wheel. 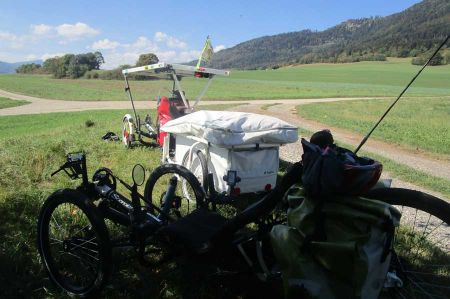 Advantages of the recumbent tricycle compared to the two-wheeled, single-track recumbent bike is the high stability against tipping, the increased braking power as well as the possibility to install an all-round fairing to reduce the wind resistance and as weather protection. Furthermore, the high tipping safety - even in the state - particularly advantageous for toddler transport by means of child seat. It also allows slow driving without the driver having to focus on balance and making snaking lines; This is a clear advantage especially uphill. This overturning safety enabled Maria Leijerstam in December 2013 to be the first person to reach the South Pole on a bicycle, in this case a trike with balloon tires, and to choose a particularly short but relatively steep route.

Disadvantages are the higher weight, the slightly higher rolling resistance and the greater width. In city traffic, the low seating position may be a disadvantage on some models. Since recumbents as three-lane vehicles are not so easy to steer around bumps, uneven roads are often associated with inconvenience to the driver, but which can be significantly reduced by using so-called balloon tires or a suspension.

Some recumbents are available as a folding bike, so that the otherwise bulky vehicles folded can also be transported in the car trunk or on the train. Recumbent tricycles are also available as a tandem (with seats one behind the other) as well as next to each other. Here, two seats are arranged side by side. 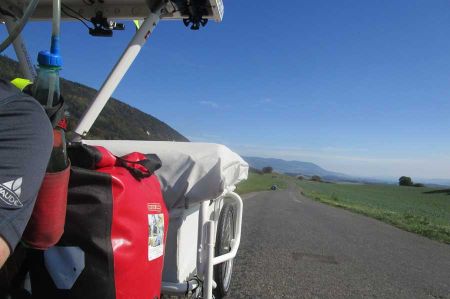 At first glance a bit unusual but neither too monstrous nor technically problematic, the E-Trike with roof and tent trailer. Jean-Yves runs a rental station for e-bikes in Switzerland and has to deal with the already mentioned discussion about sustainability and environmental protection. Recently, Jean-Yves is also the proud owner of a mini-caravan BTurtle, which was also purchased for loan. Of course he want to test equipment in the best case always first before renting it out to his guests. So it was clear that there should initially be a longer tour, where the mini-caravan was checked. Just a Weber clutch had to be mounted on the trike, the trike itself had long been ready for use.
The recumbent bike as a trike is of course particularly well suited for mounting a solar roof, since the bike itself already has a very low center of gravity and can not tip over because of its three wheels. In addition, the lying position of the cyclist, which helps finding the additional focus. In short: probably the most perfect way to use photovoltaic cells to generate electricity on the road, which can then be stored in a power bank for charging various consumers which can be used then.
We have already asked for more details about the E-Trike, please be a little patient. If you have direct questions to Jean-Yves, please contact us: This email address is being protected from spambots. You need JavaScript enabled to view it.. We will forward your inquiries.