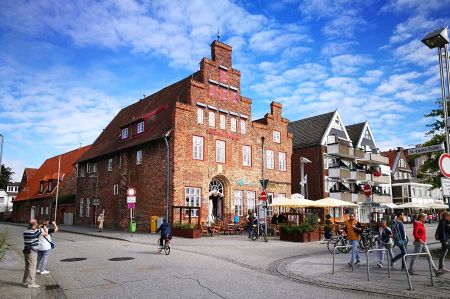 After our walk along the Trave, the beach and the adjoining steep coast, Micha led us into the old town of Travemünde, which was founded around 1187 already.

During the Danish-Lübischen war a Danish attack was repulsed in 1510. In 1802 Travemünde was awarded the title "seaside resort". The fortifications were demolished in 1807. From 1811 to 1813 Travemünde was part of the French Empire like Lübeck and thus its most northeastern location. In 1872 Travemünde was severely damaged by a Baltic Sea storm flood, numerous houses fell victim to the floods. Traces of the storm are still occasionally recognizable today.

Lübsche Vogtei - a brick gable house with a long history 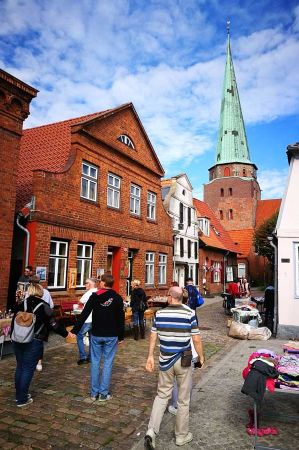 Very close to the passenger ferry across to the other Trave shore, Micha leads us into the old town. Right at the beginning we come across the Lübsche Vogtei, an old brick gable house from the year 1551 in the style of the Renaissance in the old center of Travemünde. Formerly it was the seat of the Lübeck bailiff, who not only spoke right but also managed it, in the strategically important port of Travemünde.
Today, the renovated Bailiwick is a privately used residential and commercial building at the beginning of the so-called Travemünder front row. The old building complex is one of the oldest buildings of Travemünde from the time after the devastating city fire of 1522.

The Renaissance gable house is built on two levels behind the two stepped gables in front of the pitched roof. The larger main gable on the left emphasizes the street corner to Lorenzstraße with the Lorenz Church behind. The biaxial smaller gable to the right forms the corner to the open courtyard of the property. In the main gable you will find wooden hatches at the top of the storage storey. Above the attractive portal, a coat of sandstone dating back to the 1600s is embedded in the brickwork. The portal itself is profiled and the front door is assigned to the rococo. The side wing of the Lübeck bailiwick on the Lorenz street was heavily overshadowed by garage installations and window openings.

The interiors feature is a original two-tiered Rococo staircase with carved posts and openwork parapet from the 18th century.
During the refurbishment until 2007, behind the shuttering from the period of use as a police station, ceiling paintings from the original time of the construction of the house from around 1600 were discovered and preserved, including the imperial ceiling of 1623. In the outer wall there are flood marks, where the water levels the flood of 1625 and Baltic Storm flood in 1872 can be read. 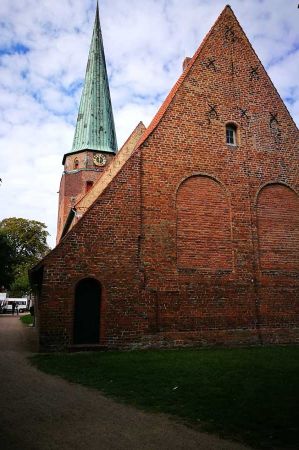 After a few meters into the pedestrian area, you will find the church of St. Lawrence, built in the second half of the 16th century in the existing form, which is mentioned indirectly for the first time in a papal document of May 11, 1235. Pope Gregory IX. In it some clerics from Schwerin with the mediation of a dispute between the Lübeck bishop Johann I and the city of Lübeck are commissioned.

For the first time explicitly mentioned is an originally Gothic church in 1259, of which only small parts have been preserved on the north and east sides of the choir. In 1522, like the predecessor in the 13th century, fell victim of  a city fire. It received the patronal feast of St. Deacon Laurentius. After the destruction of Travemünde in the Count's feud in 1534, the present church was built on the foundations of the previous one from the 1540s. Attached to the choir are additions to the sacristy and a former morgue. A tower was added in 1605/06, which was completed in 1619-1621 by an octagonal tower floor and the spire. On the occasion of the completion of the church tower in 1620, a document was laid down in which it is said that the new tower was "higher and more beautiful than the one destroyed by a conflagration together with almost the whole town on St. John's Eve 100 years ago".

Between Kaiserallee and Steenkamp, the street scene is arranged in such a way that the port, starboard, mid ship and quarterdeck streets draw the image of a ship on the city map. This "ship" in the city plan even has a drop-off with which it is laid out on the Kaiserallee. This ship theme also includes the streets In the dinghy, At the stern, Godewind (good wind) and Leegerwall (by Lee, wind shadow side).