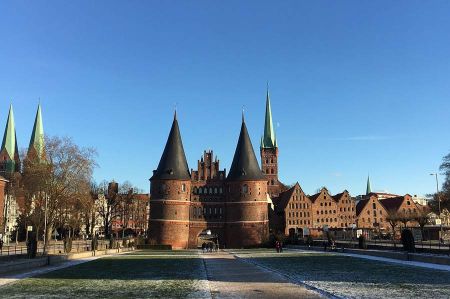 It was once again only a short stopover in the north of Germany but we wanted to use for a visit to the city of Lübeck, also as Lübeck as a city of marzipan just at Christmas time is, in the literal sense "on everyone's lips".

Our focus of the visit should first concentrate on the most famous building in the Hanseatic city, the Holstentor.

With the increasing wealth of the city of Lübeck and its citizens due to the trade connections of the Hanseatic League and its trading locations, one had almost inevitably to deal with the envious of this prosperity, which forced the Hanseatic city of Lübeck to protect itself with ever stronger walls and fortifications against external threats. Three city gates allowed access to the city: the castle gate in the north, the mill gate in the south and the Holstentor in the west. To the east, the city was protected by the early built up Wakenitz dam. Here the less martial Hüxtertor led out of the city.

The aforementioned city gates were initially only simple gates, but they were always reinforced, so that there were ultimately in all directions three to four consecutive gates. Unfortunately, there are hardly any buildings left today, only the Inner Castle Gate and the Middle Holsten Gate, which today is simply called "Holstentor", are preserved.

Holstenbrücke and first city gate on the bank of the Trave 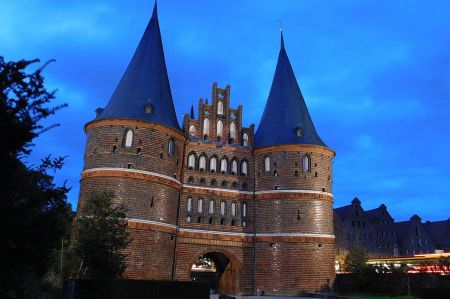 The oldest Holstentor guarded the city entrance once directly on the bank of the Trave. From the city you had to go through this gate to get to the Holsten Bridge crossing the river. When exactly the first time a gate was built at the bridge is unknown. The Holsten Bridge was first mentioned in 1216 in a deed of donation of the Danish king. It is likely that at that time there was already a gate and a wall along the Trave to the city side.

From the chronicles of the city of Lübeck it is clear that in 1376 the Holsten Bridge and other access gates to the bridge were renewed. The late Gothic Holstentor is thus one of the still existing remains of the Lübeck city fortifications and is next to the castle gate the only preserved city gate of Lübeck. For more than 300 years it stood as a "Middle Holstentor" in a row with three other gates, which were demolished in the 19th century.

Iron bars instead of a portcullis 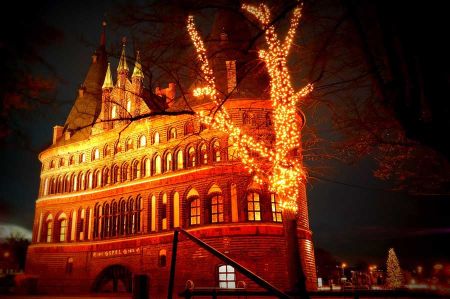 The passage through the Holstentor was formerly provided on the field side with two wooden gates, which are no longer preserved. A massive "gate" as seen in many knight castles today, was installed in 1934 only and does not correspond to the original security systems. At this place was once a so-called organ work in which iron bars were lowered individually and not as a whole. So it was possible to lower all the bars except for one or two and then wait to allow one's own people a passage or to prevent by the narrowing of the passage of an incoming enemy cavalry or vehicles with minimal effort. 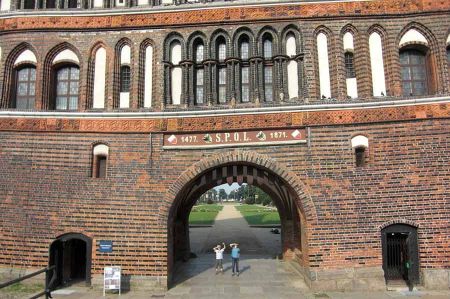 Above the passage there is an inscription on the city as well as on the field side, reminiscent of much older inscriptions of Roman city gates: On the city side is the inscription S.P.Q.L., framed by the years 1477 and 1871; the former was the supposed date of the construction, the latter the date of the restoration as well as the establishment of the German Reich. This inscription had the Roman S.P.Q.R. (Latin Senatus populusque Romanus - Senate and People of Rome) as a model and should stand accordingly for Senatus populusque Lubecensis. However, it was only installed in 1871. Before, there was no inscription at this point. It would also have made little sense, because the view of the lower areas of the Holstentors were blocked from the city side by the high walls.