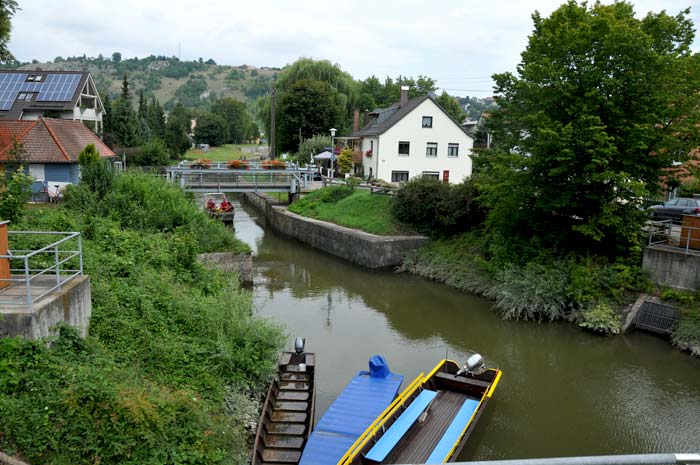 The city of Regensburg in Germany’s Bavaria state is one of the most beautiful old cities of Europe and takes place on UNESCO’s World Cultural Heritage list. In another point, we continued to discover the surrounding of Regensburg city with the couple of Hanna and Chris Röhrl. We parked our vehicle in the town of Kelheim, which is the joining point of the Danube River with the architectural and technological masterpiece Main-Danube Canal. Thus; our walking journey from the town of Kelheim to Weltenburg Abbey along the Danube River started. 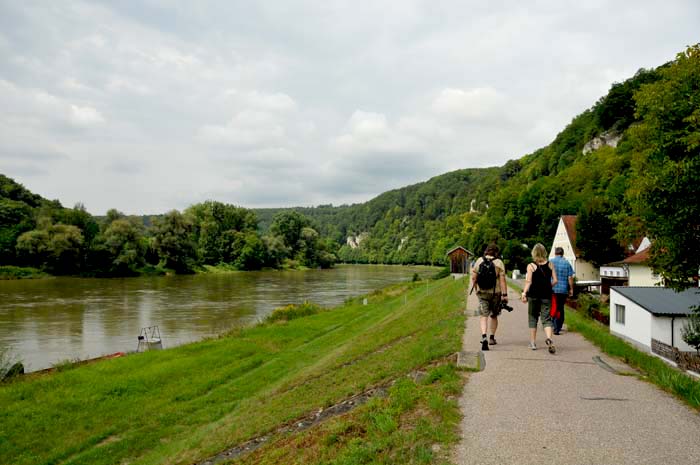 The Danube River follows its path by flowing through a narrow and steep walled valley that is called as the Danube Gorge and it is the northernmost point of Regensburg close by Kelheim. Officially named as Weltenburger Enge, the region has a natural reserve status. It compasses 560 hectare area that is 5,5 km long and 400 meters wide. On both sides of the Danube River, close and long distance walking-tracks ride that each one of them are marked. We followed one of the Weltenburger Enge walking tracks with the camera always in our hands. 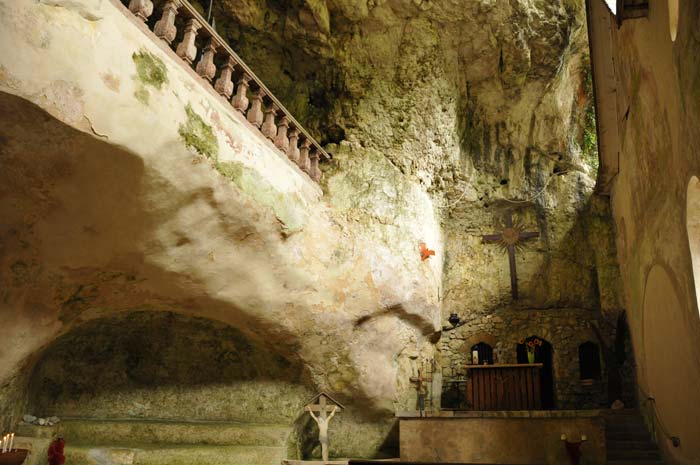 For a short time we had rested in Franziskaner Abbey “Klösterl” that was fabricated on the rocks on the road in 1454. Constructed on the cave, the unique rock church, the St. Nicholas Chapel and Nicholas terracotta figurine are worth to see. Besides, frescoes on the church walls, gravestones in the church and the inscriptions can still be seen. Nowadays, the old abbey gives service as a restaurant and a place for the presentations of various cultural events. 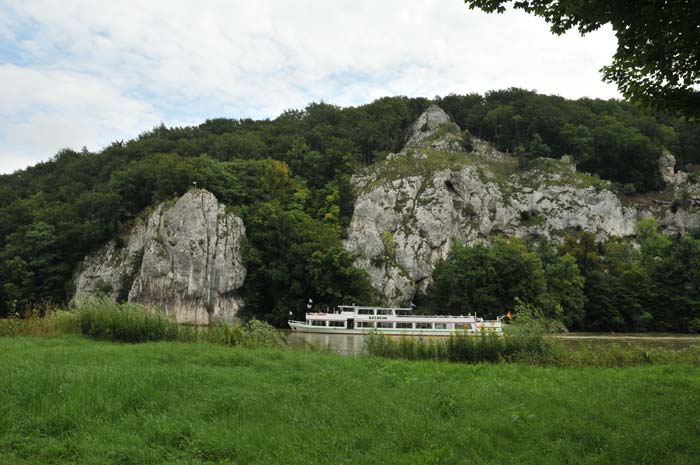 The recreational crafts that work regularly between Kelheim and Weltenburg Abbey, travel over the Danube Gorge. The walking track, which continues along the Danube River, drifts apart from the river at the entrance of the Danube Gorge. We turned to the right from there and entered into a timberland. 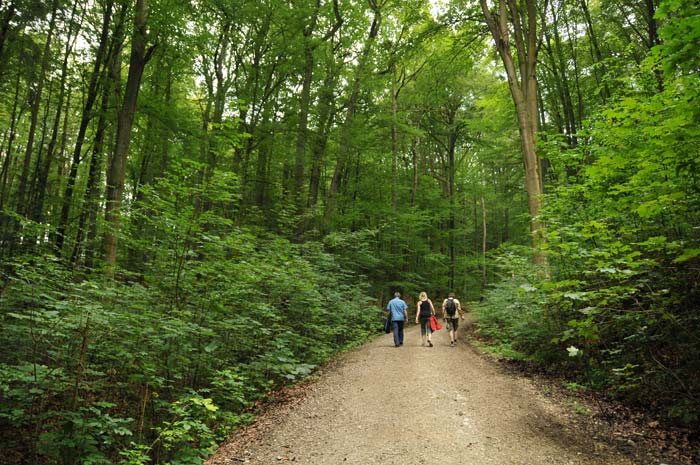 While gaining altitude, we carried on our walk in the forest that has deciduous tree species. This natural and dense marvelous beech forest is almost endowed with the walking tracks. “Road to Santiago” or “St. James’s Path”, which is the most famous pilgrimage route of Catholic sect and one of the most famous walking tracks of Europe and the world, passes from this forest and moves forward to the city of Santiago. Even though it was designed as a sacred pilgrimage path, St. James’s Way completely has been transformed into a walking track. The shadow plays of the daylight that gliding from the top of beech trees brightened our walk. 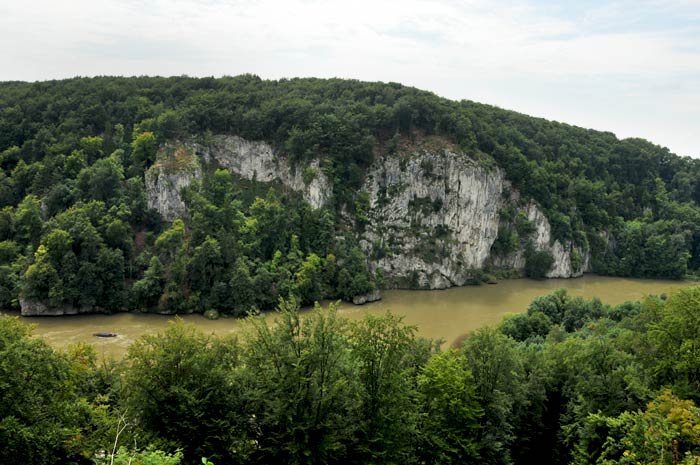 We watched the scenery of the Danube Gorge from the observation terrace in an area that tree density is lowered. At one time, the Danube River was proceeding on its way by surpassing this steeps and it is impossible not to be affected by its impressive and wild view. 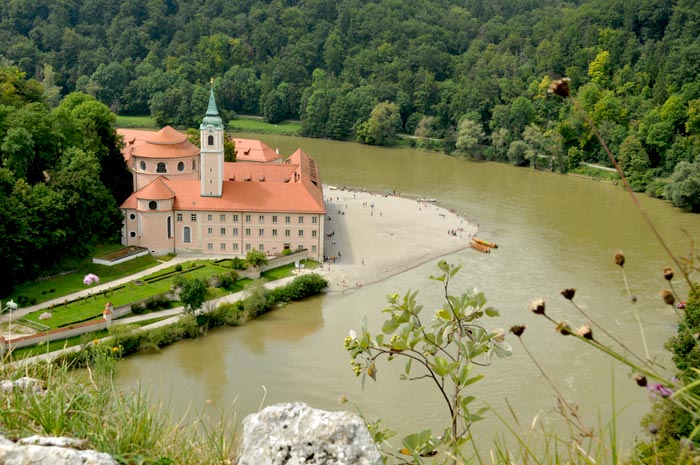 After a while, we reached to another observation terrace and visitors should see the Weltenburg Abbey, which is situated along the border of a console before the Danube River flows into the canyon, especially from here. After a short break, we remembered that we had to follow the walking track in order to achieve our aim and headed out. 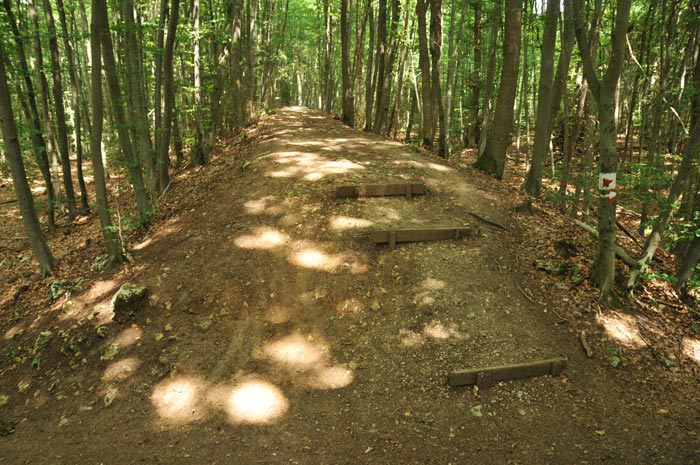 Moving towards the downward, the track enabled us to pass the Celtic wall that was formerly used as a defense wall against the Romans. The Danube Archaeological walking track also passes from this point and the historical Celtic wall is still distinguishable. 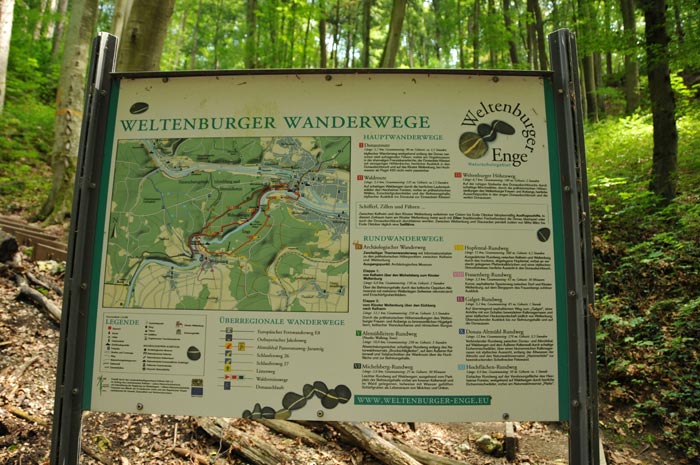 During our walk in different points, we encountered signboards that submit quite clear information about not only the walking tracks in Weltenburger Enge area, but also about the long distance walking tracks. 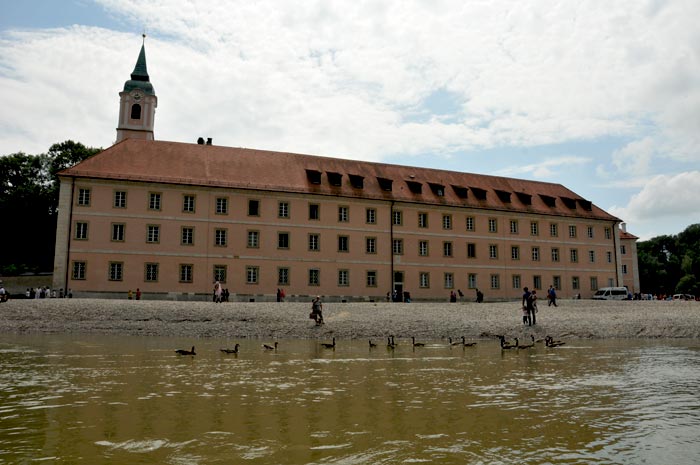 We met the Danube River on the exact opposite shore of Weltenburg Abbey. In order to go over to the opposite shore, we instantly threw ourselves to the boat that waiting for passengers. While boating the Danube River, we transparently distinguished that the beach, which we thought that is sand, consists of the pebbles that carried over by the river. 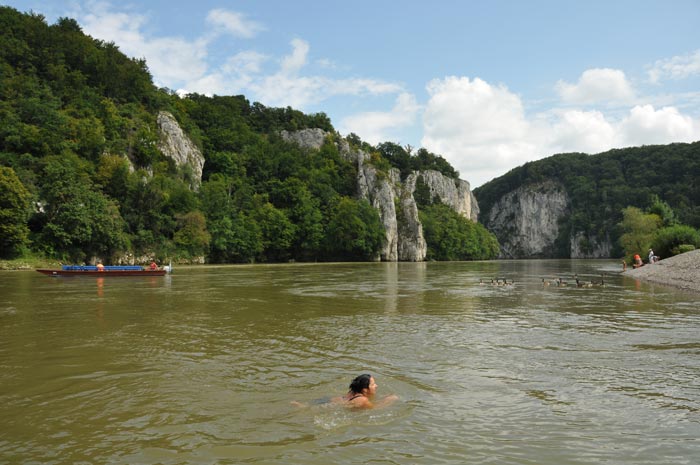 The scenery is unparalleled. While passing the Danube River with a little boat, we were accompanied by the duck families and the floaters in the river. The flamboyant abbey in front of us, the beach at the bending point of the river and the visual that the brink of the Danube Strait creates, turn into a glamorous visual quality with the contribution of blue – white sky. 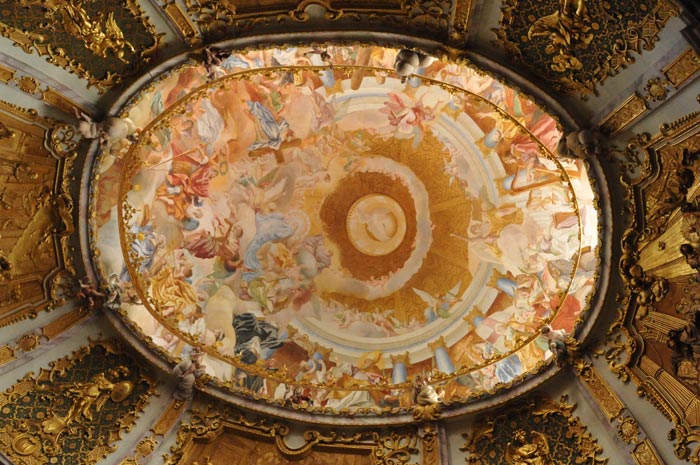 Located in the abbey’s yard, we stopped over in a restaurant to relish the indigenous delicious specialties that cooked in the abbey. We tasted the oldest and dark colored beer of the world that has been produced at the abbey for centuries. Delicious! After the extremely palatable sausage, which is also the abbey production, was presented with the cheese sauced potato salad, we made a move to see the inside of the impressive baroque church of the abbey. With the help of a light band, which is aimed to bring light inside the church, and the frescoes that require competence, the straight ceiling looks like an elliptical dome by becoming three dimensional form. I have to say that the interior decoration of the church abbey is brilliant with its gilded and flowery ornamentations in baroque style and the depictions of angels that enfolded to the clouds. For me, the most interesting object is the statue of the famous Baroque architect and painter Cosmas Damian Asam that bending from the band on the church ceiling and prying us constantly. You can view the statue in the photo gallery. 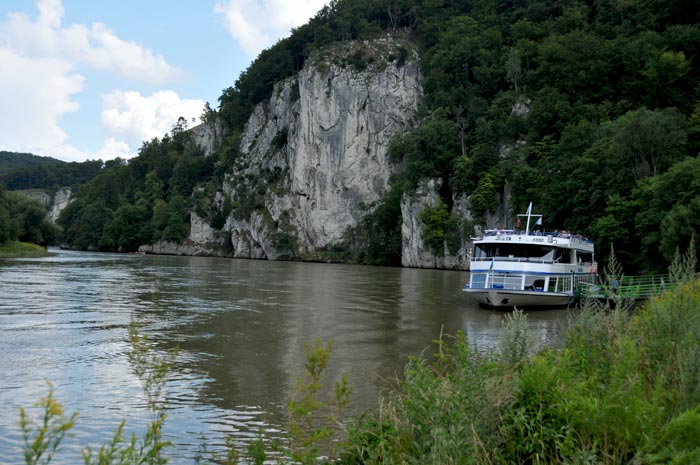 We were going to return to the town of Kelheim and this time, we wanted to pass the Danube Strait by the river road. Immediately we bought our tickets and started to wait for the passenger ship that goes to Kelheim. Since the Main-Danube Canal is used for the merchant transportation, this canyon is only used by the passenger ships and the recreational crafts. The merchant transportation in Danube is under the control of an international commission and apart from Germany, all the countries that Danube River passes are members of it. 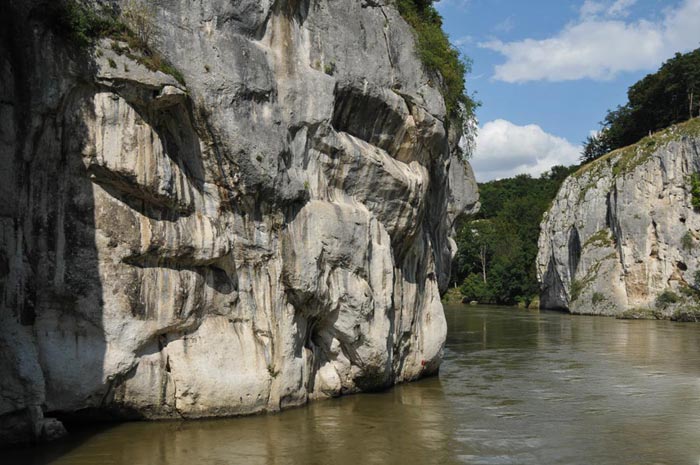 While traveling on the river, these massive rocks, which has been naturally plowed through by the Danube River for centuries, seemed much more impressive. While watching the scenery on the rocks, the canyon was not seemed narrow that much. Now, rocks were gradually approaching to the river and maneuver of the ship was getting difficult because of the narrowing river. Actually, when we started to walk, I was not expecting to come across with such an unbelievable natural beauty. 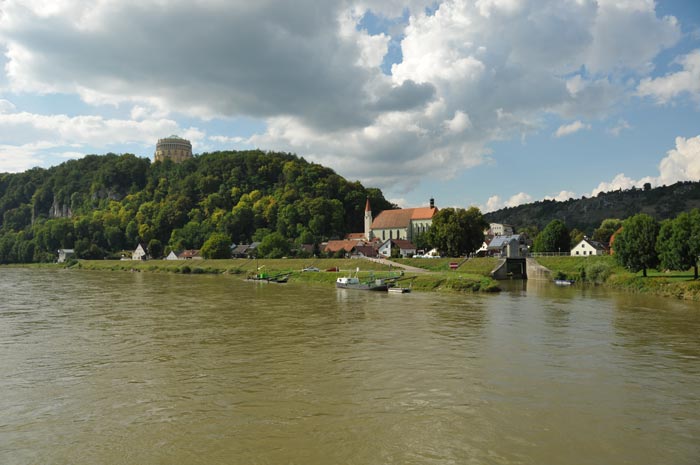 We almost came to the pier of Kelheim. The Kelheim Liberation Monument was constructed on a hill with the view of the Danube. Our wonderful journey on the Danube ends here.