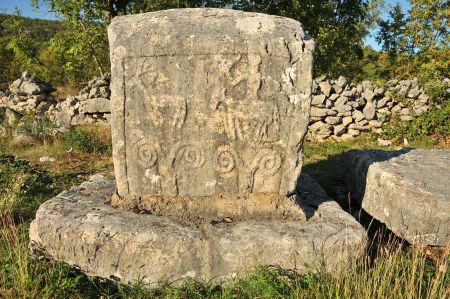 We were coming back from Imotski on the way for camping in Omis on the open fields when we met a collection of stones that immediately took all of our interest.

Immediately clear they were very old grave stones that partly provided with crosses probably pointed back to Christian origin. It was initially to create some pictures, and then do research on the Internet later on. From an attached locally sign at least was known that the stones would be so-called Stecci.

And soon we were successful because Stecci are medieval grave stones with some unique designs that are even unique in the Balkans. They came before the conquest by the Ottoman Empire, approximately between the 11th and 15th centuries. Since the range of the Stecci substantially covers the range of the Bosnian church, and this church was equated with the Church of the Bogomils, the Stecci have long been regarded as Bogomil grave stones. General is now believed, however, that they are not special to vestige of the medieval religious community of Bogomils, but ordinary grave stones by members of the Bosnian Church. Some Stecci in their motives show remains of locally pagan myths and rituals, with heraldic symbols of the status of regional Slavic nobles or the deeds of men, for which they have been set.

Stecci / Stećak is an inherited word from concepts of science, local people rather speaks about stones. A Stećak is thus an edited, medieval grave stone of a particular form, they are often found in Herzegovina, South of Bosnia and adjacent parts of Dalmatia and rare in Croatia, Serbia and Montenegro regions more far away. Today more than 58,000 finds of these grave sites are listed, many of which could be dated to the 14th and 15th century. Especially in Herzegovina many of such grave stones can be found in Stolac (burial ground Radimlja), near the Blidinje Lake and in the area of ​​Gacko.

Usually two forms Stecci of were in use: plates, as they are also be found in other regions of Europe and upstanding blocks as they occur especially in Bosnia. Nearly 6,000 of them are decorated with bas-reliefs showing human figures. Frequently scenes of everyday life, of hunting or of jousting and symbols such as crosses or crescents are displayed on these grave stones. Sometimes they are also with inscriptions such as "Please do not disturb me, I was like you and you'll be like me" provided in the font Bosančica.

Serbia, Bosnia and Herzegovina, Montenegro and Croatia signed a joint project for the candidacy and registration of these grave stones in the list of UNESCO World Heritage Site in 2009.

On the road through the former Republic of Poljika

Boat Tour on the Cetina River near Omis