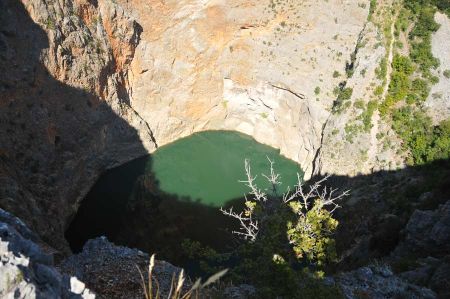 As an extremely interesting day trip destination Željka from Camp Galep had recommended a tour to the sinkholes at Imotski, probably among the most impressive, geological natural sites in the world.

We know the cardinality of sinkholes from Turkey, just to mention the two huge caves Cennet and Cehennem (heaven and hell) near Narlikuyu. Unlike the Turkish caves, the two sinkholes of Imotski just before the border with Bosnia and Herzegovina are, however, filled with a lake, in its depth depending on the season. We were curious what to expect.

Of course, the planned tour lead us again into previously uncharted territory, who knows what else is there to discover. And it was, we will report later. So we planned the journey for Imotski along the river valley of Cetina, on which we wanted to take a rafting trip later. After about 8 kilometers along the Cetina our GPS finally gave up forcing us to turn back, the valley had become noticeably tighter and culminated in serpentines, we had to go over the mountains, the route should better just be used by car.

A little later we were at an imposing bridge structure that crosses towards the Cetina River to Podgrade. Some residents in the context speak of this bridge of a Roman construction, which may have once been true, perhaps is true today when talking about the foundations. In its present form it has been built by Austrian engineers of Emperor Franz Joseph's time. Now, after some photos being taken, as well from the beautiful landscape of river Cetina, we directly continue to the Imotski Blue Lake (Modro jezero or Plavo jezero).

It was probably to be attributed to the expected rain for a long time, which remained our first view of the lake somewhat disappointing, so little water at the bottom of the sinkhole, moreover, was not true blue. Well, impressive deep down we went anyway and how we should get to know a little later, is the bottom of the lake to be seen, because the water is completely vanished, traditionally it is used as a football pitch for a game. Of course, it is easy to see that the height of the water level considerably varies depending on rainfall. Well filled, which is the case usually in the spring, the lake has a depth of about 100 meters. The diameter of the sinkhole is approximately 600 meters. The cliffs rise between 400 and 900 meters almost vertically into the air.

At the top of the sinkhole are the ruins of the castle Topana, which was already mentioned in the 10th century in a Byzantine writing. It is the real origin of the town Imotski which propagates at the foot of the castle and on the verge of collapse funnel. The city center is just a short walk from the lake. On a paved road, which was laid out on a visit of Emperor Franz Joseph, you can easily walk down to the lake.

About one kilometer north-west of the Blue Lake the Red Sea (Croatian Crveno jezero) is located, which is considered one of the largest water-filled sinkholes in the world. Again, initially a bit of a disappointment, because the Red Lake gleamed rather green. The lake is named after the reddish color of the rock wall, reaching up to 250 meters vertically above the water surface. The water itself is rather deep blue.

The nearly circular lake has a diameter of about 200 meters on the surface. Its depth is around 287 meters, where the water level may vary seasonally by 30 to even 50 meters. Its age is estimated at two million years.

A diving expedition discovered an entrance to a branched cave system with air-filled cavities in 15 meters deep in the summer of 1998, which has a second input in the rock face above the water level and leads to another, though much smaller lake. In 170 meters depth by means of a diving robot, a large inflow into the lake was detected.

For the walkers among our readers: there is a well-marked footpath around the doline of the Red Sea, beautiful views of the sinkhole and the valley of Imotski will open from the path.

Tomb stones - Stecci on the way next to Imotski