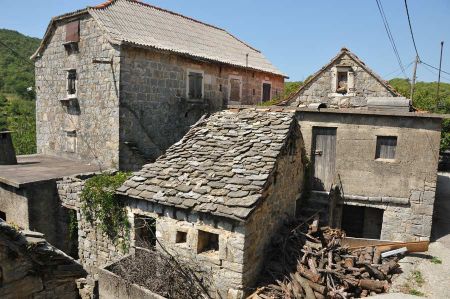 For traffic reasons Robi had chosen the route through the Valley of Poljica to Omiš, just to escape from the tourist traffic at the coast. The valley runs almost parallel to the coastline of the Adriatic, is predominantly used agricultural until today and slowly arises outdoor tourism, although offering interesting mountains and forests for hiking and mountain biking.

The Republic of Poljica once consisted of several villages that, in the Middle Ages, were under the rule of some earls houses and by that could keep a relative independence from the rest of the country.

Unfortunately it is true as well, what is reality at many predominantly agricultural regions: rural exodus due to limited income, lack of prospects for the future and the real hard work to entice many people to leave their homeland. It is known that the abandoned native villages remain almost deserted, the buildings slowly decay as the once existing infrastructure for the remaining residents forfeited back, until one day the village is completely deserted. For places like that, infrastructure packages should be developed, where the outdoor tourism could play an important role. More currently than ever is the subject of migration, which will hopefully lead to a rethinking of global policy: away from thinking and acting as selfish individual states and towards a real European Community. This is the only way to tackle the problem of migration.

It can be seen repeatedly shocking how dilapidated houses are that have been built under the greatest difficulty and by partial years of hard work. The typical stone houses of Poljica could sensibly and professionally rebuilt be very attractive accommodations for hiking and mountain tourism. Still located in this idyllic setting, as a few examples of a nameless village show. Maybe we can get a little more help to ensure that this sustainable tourism can also be developed for the benefit of local people.

A little later we are down to the tourist offices, still in the high season Omiš, which was once called Onaeum, is still very busy. During the Roman period there were a number of smaller settlements in this area, of which Oneum was within the districts of Omiš. Probably there also was a Roman road from Salona coming this far, archaeological examinations have not yet taken place.

After the fall of the Western Roman Empire and a brief Byzantine rule the city fell into the hands of the Slavic Narentaner which held the area until the 14th century. During this time, Omiš was a pirate's nest. In addition to lying within the groups of islands in the northern Adriatic Sea the town became a center of piracy in the Adriatic, especially the Venetian maritime trade was strongly effected. At times, even Venice had to pay a very high fee for free sailing. After that, several dominations alternated rapidly until 1444 Venice finally succeeded to conquer the town. The Serenissima remained until the end of the Venetian Republic as mistress of Omiš.

During this period the city received todays Dalmatian-Venetian embossed appearance.

Culturally very significant is the old Croatian church Sveti Petar's (St. Peter) on the opposite bank of Cetina. The single domed building, dating from the 10th century, is one of the most valuable monuments of Dalmatia from this period. A geographical feature of the small town is the mouth of the river Cetina into the Adriatic Sea. This estuary separates the old town from the new town. With a bridge over the estuary, these two parts are connected together. Above the town, the ancient remains of fortresses Starigrad (from the 15th century) and Mirabella (from the 13th century) are quite visible, which we will visit on our next visit.

Boat Tour on the Cetina River near Omis