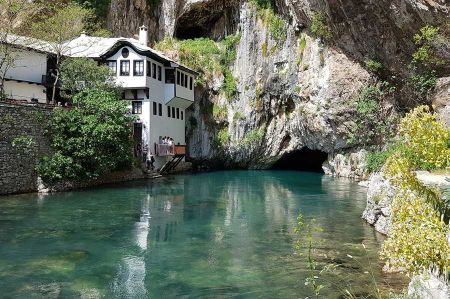 Our visit with the extended tour of the Stari most bridge was so impressive that we immediately decided to extend our stay in Mostar even further, especially since there is also a small campsite in the immediate vicinity.

So it was primarily a matter of examining the history of the place a little, whereby we of course also came across the history of the destruction and rebuilding of the Stari most bridge on November 9, 1993, which led to further conflicts until the restoration took place. But now to Mostar first, because the changeable history of the city was more than varied due to the different rulers in history.

The mountains and valleys around Mostar were already settled in antiquity, so archiologists found remains of late antique basilicas in the villages of Cim and Sutina, which suggests a continuous settlement of the region. In the late Middle Ages, the Neretva Valley was under the rule of the Kosaca family. In 1454 there was a fortified crossing over the Neretva here in Mostar, which was heavily frequented by traders. This crossing was then conquered by the Ottomans in 1466, who expanded the place into an administrative seat, which is then mentioned for the first time in 1474 with the name Mostar (in translation something like bridge guard). In the 16th and 17th centuries, Mostar developed into the commercial and economic center of Herzegovina; At times it was also the seat of political power. In 1566 the now famous stone bridge was built in place of the old wooden bridge. After the Great Turkish War and the Peace of Karlowitz, the city received new fortifications.

After the Ottomans Austrians and Hungarians came 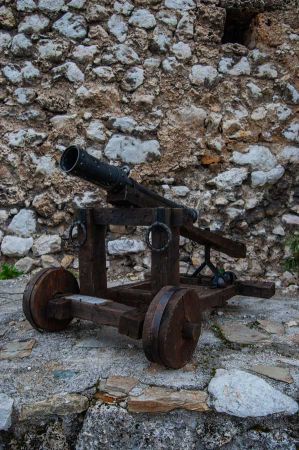 In 1833 the existing sanjak was upgraded to Paschalik Herzegovina under the vizier Ali-paša Rizvanbegovic, but after his death it was reunited with Bosnia.

Like all of Bosnia and Herzegovina, Mostar came under Austro-Hungarian administration in 1878. In 1881 the city became the seat of a Catholic bishop. Mostar received a railway connection, and three more bridges were built across the Neretva. After the First World War, Mostar belonged to Yugoslavia, initially to Mostarska oblast, from 1929 to 1939 to Primorska banovina, from 1939 to 1941 to the autonomous Banovina Hrvatska. During the Second World War, Mostar was annexed to the independent state of Croatia. On February 14, 1945 it was captured by partisans of the Yugoslav People's Liberation Army. After the war, the city became part of the Republic of Bosnia and Herzegovina in the restored, now socialist Yugoslavia.

Balkan / Bosnian War and its Consequences 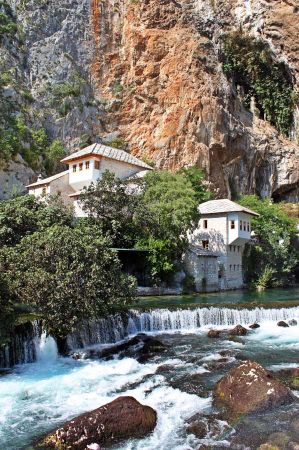 During the Bosnian War there was fighting between Croatian-Bosniak and Serbian units in Mostar in 1992/1993, and then between Croatians and Bosniaks in 1993/1994. The "Old Bridge" was destroyed in the Bosnian War on November 9, 1993 by massive shelling from the Croatian side. More on that later in another article. Among other things, the city was divided into a Croatian-western and a Bosniak-eastern part through evictions. The reconstruction work began in 1996 and was completed in 2004. The bridge and the old town were added to the UNESCO World Heritage List on July 15, 2005.
Administratively, Mostar has formed two cities since the war: a Croatian on the western bank of the Neretva River and a Bosniak on the eastern bank. On behalf of the EU, Hans Koschnick was sent to Mostar as a mediator. In January 2004, this condition was formally lifted and a new regulation was introduced, according to which the city is divided into six municipalities, which together represent one unit. As a result of the ongoing dispute about the administrative structure, there were no local elections in Mostar from 2008 to 2020.
Near the bridge is the Karadozbeg Mosque, which is also open to visitors. The mosque with medresa (Koran school) and Šadrvan (fountain) was built in 1557 and badly damaged in the war in Herzegovina, but has been restored in between.
Also worth seeing is a Christian basilica in the suburb of Cim, which was probably built in the 5th or 6th century. The Serbian Orthodox Cathedral of the Holy Trinity, built between 1863 and 1873, was destroyed in 1992. It has been rebuilt since 2010.
In the course of the refugee crisis in Europe, temporary refugee accommodation was created near Mostar in 2018, which migrants use as a temporary residence before crossing the border into the European Union.

Test of courage for young and old - jumping bridges 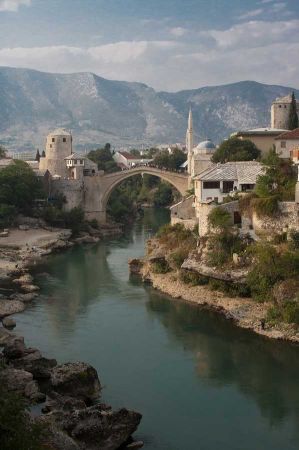 There is a tradition among the “young” men of the town to jump from the railing wall of the bridge into the Neretva from a height of 20 m, nowadays after being paid for it by tourists. City legend Alija "Ale" Ajanic, also known as “champion” on the street, jumped for the first time at the age of 13, won 7 jumping competitions and jumped at least until the age of 50. Some jumpers got broken bones and sometimes even death. Since the Neretva is very cold and the bridge is quite high, this requires courage and an appropriate level of fitness. The custom is said to go back to the time of edification; the first record of a jump is from the year 1664. A competition has been held since 1986 at the end of July, participants must be at least 18 years old. After the bridge was destroyed in 1993, an assembled board for jumping was installed. Emir Balic (* 1934 or 1935) jumped from the bridge more than a thousand times - most recently at the age of 61 - and won thirteen times. In 2015, 53 participants were registered, but two decided not to jump from the bridge. The jump is the foot jump or the "swallow" (Bosnian: "lasta"), a head jump with arms spread out to the side at the beginning.
Unfortunately we were in Mostar at the wrong time.