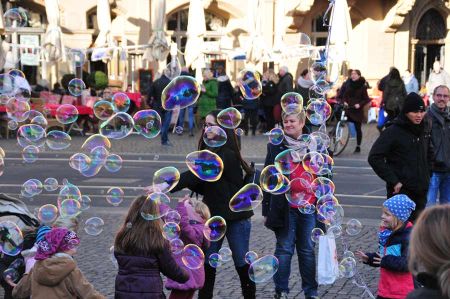 Once again on the road in Erfurt, we not only had the surprisingly announced large-scale demonstration against increasing right-wing populism and the resulting violence on our screen

(after the disaster in the Thuringian Landtag last week, it was probably a far more than absolutely necessary sign of the population against the right-hand twist and against democracy), we also wanted to use the remaining time for a little stroll through the city. So, shortly after the demo we came across a soap bubble artist who was able to quickly cast a spell over us due to his art. And not just us. A group of passers-by had already got involved in his game, including numerous children who tried to catch the soap bubbles with their hands. A fascinating game. Every now and then the equipment was changed, so that the artist created huge soap bubbles that were greeted enthusiastically by the audience. A play of colours in the already low evening sun.

Soap bubbles have been fun factor since the Middle Ages 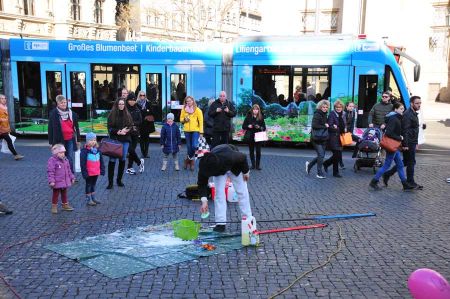 One of the earliest artistic representations of soap bubbles as a children's toy can be found in Pieter Brüggel's painting “The Children's Games” from 1560, from which it can be concluded that soap bubbles have been used by children for entertainment for at least 500 years. Remarkable when you consider that the mass production of soap just began in the 19th century, and the soap manufacturer Pears, who still exists in England to this day, used John Everett Millai's paintings soap bubbles ("bubbles") to market his products Showing grandchildren when playing with soap bubbles. In 1948, the chemist Rolf Hein developed a new formula for a detergent, which, however, had the disadvantage of foaming too much. He had the liquid soap filled into bottles, added a blow ring made of a fine spring wire coil bent into a ring with a handle and sold the product under the name "Pustefix" as a children's toy. Since then, combinations of alkali-filled plastic tubes and blowpipe have been used to produce soap bubbles.

Soap blowers also on the go in Thessaloniki 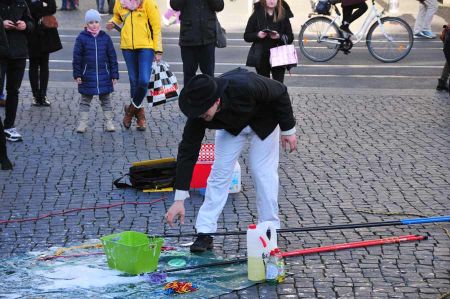 We had a similar encounter last year when we met a young couple during a stroll through Thessaloniki, who got their travel maintenance with their soap bubble show. Have been traveling along the coast of the Balkans all summer, they went to places that were popular with the public, held their show and then asked visitors and passers-by to make a small donation. A possibility that can contribute a lot to the entertainment of the guests. Relatively environmentally neutral, the soap bubble only consists of a very thin film of soapy water that forms a hollow sphere or tube with an iridescent surface due to the enclosed air. It usually just remains stable for a few moments and bursts immediately when it comes into contact with solid objects. A few drops of soapy water remain, that's it. Because of this slight transience, the word "soap bubble" has become a metaphor for something that is attractive, but is nonetheless devoid of content. This is also reflected, for example, in the phrase "The dream burst like a soap bubble". With little effort - great fun for young and old!