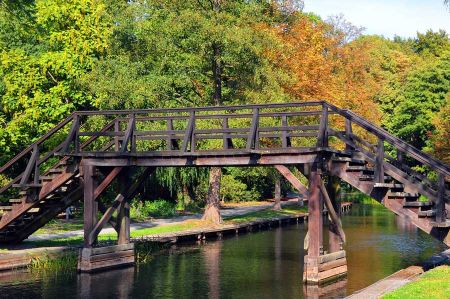 Since people settled, there have always been certain conditions for settlement, to which the availability of drinking water also contributed a large proportion.

Due to this fact, it was for sure that settlements would initially arise on rivers and lakes or at least in the vicinity of existing drinking water. However, this has the consequence that one also had to deal with the topic of water, or better, floods. Thus, pile dwellings were often built on the banks of the lakes, the first bridges over the rivers or footbridges over swamp areas were built, whereby the building materials used for this consisted primarily of wood from the area.

Fords with customs stations are an intermediate step in building bridges 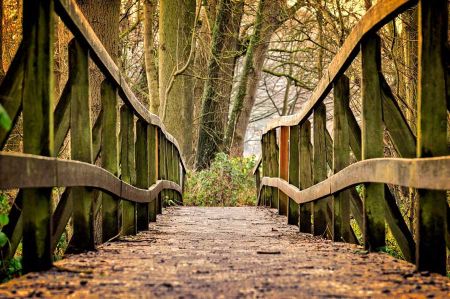 An interesting starting point in connection with river crossings are the so-called fords. The oldest fords arose on natural flat areas of a flowing water. The change in the morphology of the rivers was used to enable risk-free passage through the river.
In meandering flowing waters, fords are regularly found at the change from the impact slope to the glide bank. The elevation of the bottom level in sections is an integral part of the typical Furt-Kolk sequences of lowland rivers. In larger rivers with branched sections, the fords are mainly located in the area of ​​river splitting areas. Since crossing several side arms was less risky than using the main arm, which has higher flow velocities and greater depths.
Even today, numerous city names point to shallow water spots that were formerly used to cross rivers, just four city names from Germany and two from England should be mentioned here: Schweinfurt, Erfurt, Frankfurt, Furtwangen as well as Oxford and Stratford Upon Avon.
In the course of the increasing transport of goods, it quickly became clear to the residents that these locations were also very suitable for collecting customs duties or passage fees. Procedures that were later used to finance the first bridges. 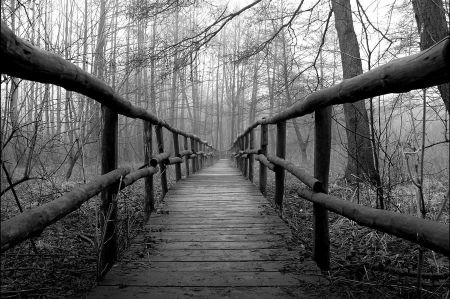 The actual bridge construction began in prehistoric times with fallen trees, deliberately placed trunks, lianas, stones and wooden planks, which covered short distances as bridges with a small span, and nowadays ends with many kilometers of bridges and suspension bridges whose vibration dampers are computer-controlled. But there is still a long way to go.
Old wooden bridges have nowhere survived, but so-called plank paths are known from the Mesolithic period, on which swamps were crossed. Well-known examples come from the Somerset Levels in England and Lower Saxony, especially in the peat and bog areas. In London, Bronze Age bridge remains have been preserved in the Thames near Vauxhall. Remains of an Iron Age wooden bridge were found in La Tène in Switzerland.
Existing cuneiform texts from the ancient Assyrian period show that there were already bridges in Anatolia. So there was a bridge in Purušhattum; An Assyrian merchant here paid a toll of 15 shekels of copper per donkey per crossing. Another bridge was between Salatuar and Wahušana.
There is written evidence of a bridge near Tapikka in Hittite times. The pillars on the bank were made of stone, the bridge itself of wood.
According to tradition, the oldest Roman wooden bridge was built in the 7th century BC: Pons Sublicius over the Tiber in Italy.

Ship bridges for crossing rivers or even straits also existed early on. Herodotus reports that during his campaign against the Scythians (513/512 BC) the Persian King Dareios I reached Europe with his 70,000-strong army on the ship bridge he commanded across the Bosporus. In the course of the same campaign, his army also crossed the Danube on a ship bridge. Xerxes I had the ship bridges over the Hellespont (approx. 480 BC), two bridges consisting of over 300 ships each, built to cross the Dardanelles.

Start of building bridges from stones and blocks 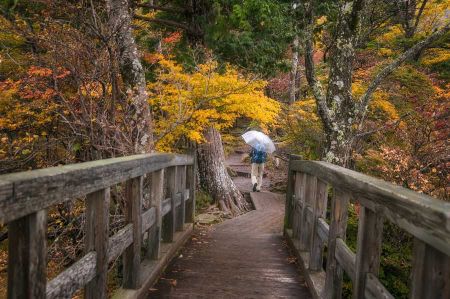 Stones, on the other hand, were first used in the form of stepping stones to cross streams and probably soon developed into stone slab bridges. These are simple bridges made of large stone slabs loosely laid on the banks or on stone pillars. Examples are the bridge at Lablachère in France and the Tarr Steps in Exmoor National Park in England, which may date from the Bronze Age. Such stone slab bridges (clapper bridges) have been built in England and Wales, but also in Spain and Portugal, since the Middle Ages. The longest flagstone bridge is the Anping Bridge, which is more than two kilometers long and was built between 1138 and 1151 in Jinjiang, Fujian Province, China and was the longest bridge in China until 1905.
The construction of stone arch bridges began with cantilever arch structures. The bridges of Arkadiko in the Peloponnese, built by the Mycenaeans around 1300 BC. Built to connect with the coast, they are the oldest preserved stone arch bridges in Greece and perhaps even in the world. They are still used today.