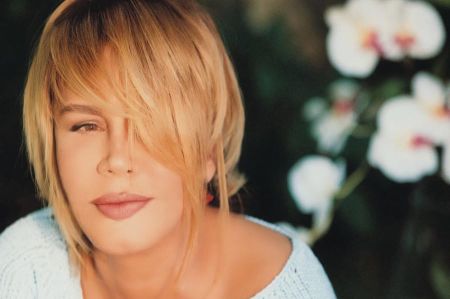 Sezen Aksu was born July 13, 1954 as Fatma Sezen Yıldırım in Sarayköy, Denizli, Turkey. At the age of three her family moved to İzmir, she finished high school and began studying at the local agricultural institute. Because of first success in music, she left college without degree.

In the 1970s Aksu, along with Ajda Pekkan, is credited with laying the foundation of Turkish Pop music. Because of collaboration with lot of other musicians, f.e Tarkan (continential hits like "Şımarık" and "Şıkıdım"), Aksu has influenced Turkish Pop and world music and widened her international audience a lot. Her songs became well known across the Balkans and Greece at first. She started writing songs for couple of other musicians and when her protegé Sertab Erener won Eurovision song contest in 2003, she became well known all over Europe. Couple of tours in Europe and the USA followed. Critical songs about women’s right, the environment and educational reforms in Turkey followed.

Aksu has been married and divorced four times, but kept the name from her second marriage to Ali Engin Aksu, a doctor of geology who currently resides in Canada. She has a son together with Sinan Özer.

Sezen Aksu released her first single, Haydi Şansım / Gel Bana (Come on My Luck / Come to Me) in 1975 under the name of Sezen Seley. However, she remained undiscovered until her 1976 single Olmaz Olsun / Vurdumduymaz (Wish It Never Happened / Insensitive) reached number one in the Turkish charts. Her first album was 1978's Serçe (Sparrow), which was to give her the nickname, penned by a Turkish journalist.

An Aksu drive finally got Turkey to apply for the Eurovision Song contest in the mid-70s. Ironically however, even though she competed in the national finals for the competition three times - "Küçük Bir Aşk Masalı" (A Little Love Tale) was a duet with Özdemir Erdoğan, "Heyamola" was performed as a trio with Coşkun Demir and Ali Kocatepe and "1945" was her solo performance - none got the chance to represent Turkey abroad. It was to be left to her pupil Erener to win the Eurovision and realise Aksu's dream to push her musical vision further into Europe.

In the 80's, Aksu had a relationship with producer Onno Tunç that was both romantic and professional. The couple put their signatures to works that broke new ground in Turkish pop music, such as Sen Ağlama (Don't Cry), Git (Go), Sezen Aksu'88 and Sezen Aksu Söylüyor (Sezen Aksu Sings). Her music matured in the 90's, when she co-produced her best selling album to-date Gülümse (Smile) with Tunç. The A-1 track from the album called Hadi Bakalım (Come On Now) was a hit in Turkey and Europe, and was published as a single in Germany. It was to be later rediscovered in Europop by singer Loona as Rhythm of the Night.

Parting ways with Tunç, in 1995, Aksu branched out with the experimental album Işık Doğudan Yükselir (Light Rises From the East), drawing both on western classical and regional Turkish musical traditions. This album made her name outside Turkey and gave her a world music following across Europe. In 1996, she released Düş Bahçeleri (Dream Gardens) as a tribute to Tunç, who died that same year tragically when his private plane crashed. In 1997, she released Düğün ve Cenaze (The Wedding And The Funeral), this time collaborating with Goran Bregović.

She returned to her roots with Adı Bende Saklı (Its Name Is Hidden In Me), which was released in 1998. She began to use experimental sounds and was once again pushing Turkish pop into the future. Aksu continued with this trend with her subsequent albums Deliveren (Crazymaker), Şarkı Söylemek Lazım (Gotta Sing) which also featured former Sparks bassist Martin Gordon as engineer/mixer (and also as bass player on her subsequent European tour),

In 2005 she was featured in Fatih Akin's documentary film "Crossing the Bridge: The Sound of Istanbul" with a performance of the song "Istanbul Hatirasi."

Aksu has recently been re-releasing all her old classics digitally remastered and with specially designed new sleeves. After her concert tour in summer 2006, Sezen Aksu performed at the Royal Albert Hall in London, on 7 October 2007. After Zeki Muren, she was only the second Turkish artist to perform at the prestigious venue.

In 2008 Aksu released her album called Deniz Yıldızı through Starfish Records. And in 2009 she released her latest album Yürüyorum Düş Bahçelerinde which sold over 100 000 copies during the first week of its release. The album contains new original songs as well as some older songs which were composed by Sezen Aksu for other singers, most notably Çakkıdı, Kibir, Yok Ki.