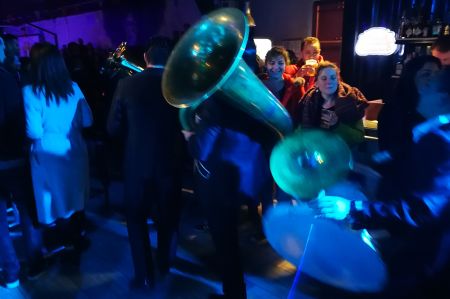 After the performance of the Calgija Sound System group coming from the Republic of Macedonia for the Balkan Festival, the break following their concert was suddenly filled with great unrest from the back of the concert hall, which was quickly filled with the sound of a lively orchestra, paving their way through the audience: Vesela Druzina Orkestar, as well coming from the Republic of Macedonia.

In an adjoining room, the members of the ensemble had gathered, and then, surprising the audience, were able to find their way through the audience to the middle of the dance floor, where they gathered, all the way down performing, with more songs to fill the break (during which the stage was prepared for Thrax Punks).

Davul - the penetrating sounds always in the front

In addition to the trombone, the trumpet, a kind of clarinet and other wind instruments, the Davul, known for its penetrating sound, was also used by them, which we admired already during the Thrax Punks concert. The Davul is a two-lined drum, which is widespread throughout the oriental area. In Eastern Europe, where it is mainly anchored in the folk music of the Balkan peoples, it is also called Tapan, in Iran and Afghanistan Dohol. The similar Turkish Davul has a flat wooden body covered with two different skins. The player wears them on a strap hanging over the left shoulder. The high-pitched fur on the left is beaten with a thin whip (çubuk), the lower right with a massive beater (tokmak).

The Davul is often played together with the double-reed-instrument Zurna. Zurna, in Turkey and in some neighboring countries under the influence of the Ottoman music culture, is a group of double-tube instruments with funnel-shaped sound cups. Both instruments also accompany the oriental folk dance Halay. The combination of a tube drum and a wind instrument of the Surnai type can be found in many Asian countries too. It reached the western military and orchestral music as a great drum by the Janissary music. In the invention of the jazz drums it was a model for the bass drum. Nowadays the Davul is also increasingly found in the music of the Middle Ages.

The names of many oriental and medieval European drums are based on the general Arabic term tabl for drums. Ottoman historians have derived Davul from the Ottoman-language Tabıl. The word appeared in a Central Asian text from the 11th century for a drum beat during the falcon hunting as Tovil or Tovul. Persian drums are called Duhul. Previously, the Central Asian Davul was considered a shaman drum.

The name for the Arabic drum ultimately comes from the Aramaic tablā from the Akkadian word Tabālu, which appeared in the 8th century bc. The origin of the instrument is not stated, because what Tabàlu really meant is still unclear. The Mesopotamian drums known from illustrations, such as the Akkadian Lilissu and the still older Sumerian Balaggu were apparently no predecessors of the Davul.

With the completion of the stage for the performance of the Thrax Punks, the Vesela Druzina Orkestar chapel moved back into the adjoining rooms with loud screaming applause from the audience. After the end of the Thrax Punks concert, another performance was to follow, as spectacular as before, but as a new highlight together with a traditionally dressed dance group. The hall was raging. A successful performance and really professional musicians from the Republic of Macedonia.