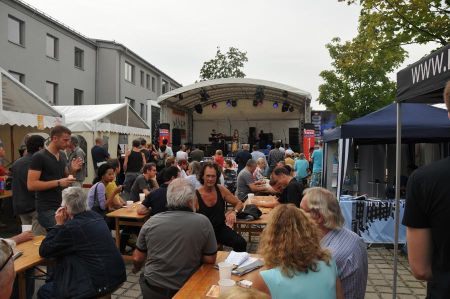 The 2012 summer festival, which was held for the 7th time, can without a doubt be described as a very successful cultural festival organized by the company “music world ek” Augsburg again this year.

During the rehearsals of the group Backdoor Connection we already had the opportunity to attend part of the event program in advance.

Get your balls to the wall and your hair high, let's party hard 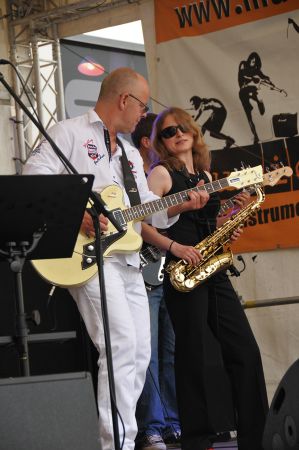 Last Saturday it was time again. In addition to the main stage, which was constantly used by various regional bands for their own and cover presentations, there were a number of information stands related to music and performance equipment by musicians, as well as some quite interesting workshops for musicians and music lovers as well also a second stage for newcomers from the region.

With the motto "Get your balls to the wall and your hair high, let's party hard!" the music world summer festival of the year 2012 took place again on the company premises. We drove into Augsburg at around 11:00 a.m., found a parking space on the extensive grounds immediately, so that we were there almost on time for the start of the summer festival. However, two up-and-coming school bands had already completed the start of the program. Now Alberto Menendez' top-class jazz-soul duo followed. 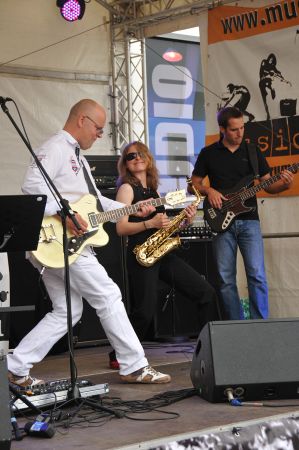 We used the break before the performance of the band Backdoor Connection to visit the food stands: we chose neck steaks with potato salad and a shandy. Here, too, everything was well organized and professionally carried out, so that dining on the benches and tables with background music could take place under the open sky (fortunately the weather played along very well, despite a few thunderstorms in the surrounding area). Backdoor Connection started their program at 2 p.m. sharp, which also represented the anniversary concert for the 10th anniversary of the band with a colorful mixture of funk and rock.

This was followed by performances by Rüdiger Baldauf (Heavy Tones) on the trumpet. The Catburys followed with their renditions of songs from the 50's and 60's. Dee Rosario then followed as a singer and songwriter and in the evening Rock by Gundy Keller. A colorful program through many areas of modern music, which ended with the performances of Hermann Frank and Stefan Schwarzmann from the German heavy rock legend Accept and the Hollywood Burnouts.

A great festival that is definitely worth imitating 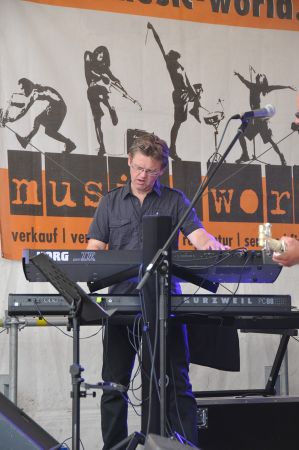 There was a special treat for young musicians. Under the motto "Record your band" musicians could play their own compositions and have them recorded. Workshops were offered by manufacturers of keyboards or Line6PA systems. Many exhibitors granted the young talents special conditions and there were further extra discounts on presentation of the summer festival flyer, which contained a voucher. The raffle with prizes totaling €2,700, which was drawn before the live performance of the Hollywood Burnouts, provided another chance to get “musician equipment” at low cost.

The tour of the open business premises also made many musicians' hearts beat faster, because in addition to all the instruments that could be tested, technically experienced staff were available to answer almost all questions. A great festival that is definitely worth imitating. 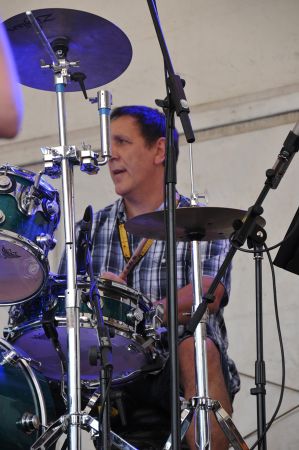 Are you interested in booking the band "Backdoor Connection" for your event? Depending on the size of the premises and the number of guests to be expected, we offer you different arrangements for organizing your events. Our options range from purely acoustic arrangements / unplugged to full-length programs. On request, we would be happy to send you our demo material as a live DVD and/or music CD.

Please give us initial basic information about the planned event in terms of time, location and expected number of visitors. Thank you for your understanding. If you are interested, please use the following email address: This email address is being protected from spambots. You need JavaScript enabled to view it.