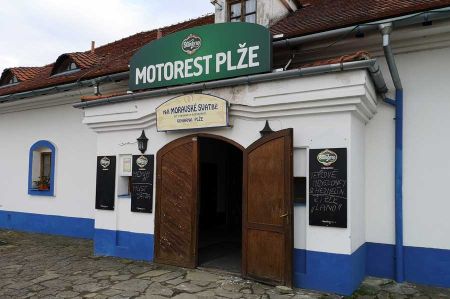 It was just a coincidence and ultimately due to the increasing feeling of hunger that we encountered a small restaurant and a wine cellar behind it when driving through the village Plže - Petrov.

Gernot had repeatedly told of his trips through Bohemia and Moravia, also that he had always eaten good fish while travelling. So we did not ask for long, as we reached behind the train tracks, the picture showing the inn. 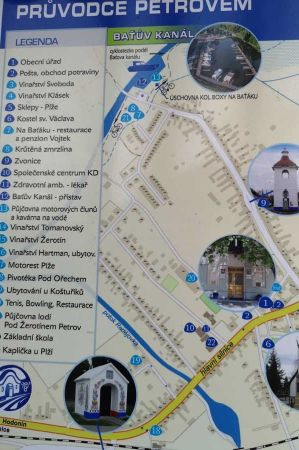 Little later we parked the car when we already noticed the many small vaulted houses on the extensive terrain that were initially unexplainable to us. Gernot then drew our attention to the well-known wine region we had just come through. And our little cottages were simply wine cellars. Right in the entrance area of ​​the basement complex we came across the chapel of the Virgin Mary Bolestná, which is also one of the important sights of the village, with Moravian-Slovak ornamental decoration. This impressive structure guards the entrance to one of the most valuable ensembles of wine cellars in Moravia.

The wine cellars in Plže are already mentioned in the 15th century, later the underground "plže" served not just for the storage of wine but also as a shelter during the war. The site, whose name derives from the shape of the caves hollowed out in the soft yellow clay and consolidated with cap vaults, probably arose simultaneously with the creation of the vineyards. The buildings belong to the type of earthen cellar without pressing houses, whose function usually fulfills a rectangular space behind the bricked front. And the facades are the defining visual and aesthetic element of the cellars of Petrov. From the 16th century, they are built in a uniform style, with dominant architectural elements of Baroque shapes with a curving arch over the arched entrance to the cellar. White limestone facades with underlays and oak doors underline even more the aesthetic effect. In the cellars, where the blue color of the underpinning on the side wall is replaced by red, there is not just good wine but also a girl to marry.

Clay and weather contribute to the wine quality 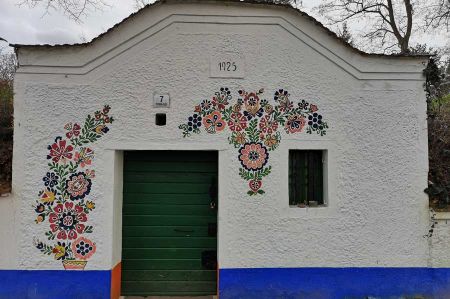 The unique combination of historic objects of winegrowing technology stands out with its originality, peculiar ground plan and creative character. The area near Plže is already documented in the 15th century. The word Plže is an expression for a room in a cellar, which is commonly used in various localities. The oldest wine cellars are excavated below the floor, arched with stone and connected to the entrance press room with a corridor called "sija" (neck).

The length of the cellar is between 10.00 and 17.00 meters. The thick layer of loam over the vaults provides a favorable climate, which is so important for the winemaking process. In the antechamber the grapes are processed and table and benches for the cozy get-together of the winemaker and his guests for a glass of wine are not missing. The complex of wine cellars, as preserved at the beginning of the 3rd millennium, is accompanied by 63 buildings of various ages. We see three main roads in the area, which are surrounded by these wine cellars radiate and thus form a village square. The design of the basement in a semicircular system forms an entrance to the grounds as well as the confluence with the central village square, which serves for events of various social and festive gatherings.

The Baroque view of the various faces of the white-painted and blue-painted cellars and their urban composition make up an extraordinarily valuable whole, which has even been declared a National Monument.

Enjoy the highest quality wines in the Plže wine cellar

Stop by and try the unique Moravian wines directly in the wine cellars, not just in any, but in the little white houses with sky blue pedestal and colorful vine decoration on the sides. The cottages seem so unreal that you might think that the hobbits of Tolkien live there.