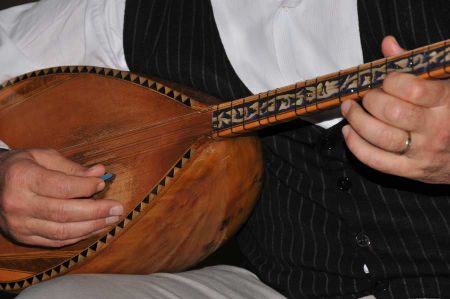 On the evening after the first day of the seminar in Adrasan, there was not only an excellent dinner, but also a musical conclusion with traditional music on the instrument "Saz", which can also be described as traditional, performed by the head of the AKVAM, Prof. Erol Esen himself.

After an initial announcement, the seminar participants gathered in the cafe bar to listen to the sounds of this special long-necked lute, which is widespread from the Balkans to Afghanistan and reflects the typical sound of oriental melodies.

Short-necked version, which plays a crucial role in Alevism. 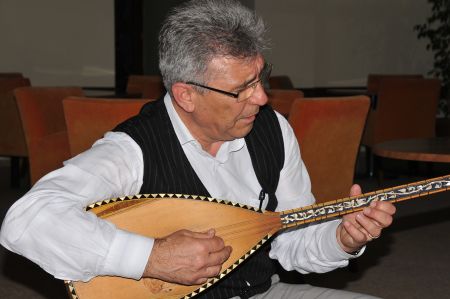 In Turkey, the medium-sized version of this plucked instrument is mainly used, which is also known as the bağlama. However, there is also the short-necked version, which plays a decisive role in Alevism.

The short-necked bağlama is a very important part of the Alevi assembly ritual called cem, during which poems (deyis) are recited or sung to the sounds of the instrument.

There is almost always dancing at these religious gatherings.

This religious, almost mythical dance is called Semah. So it is easy to understand that in the Alevi religious ritual almost every clergyman must be able to play the baglama.

Spread of the Bağlama far beyond the Ottoman Empire 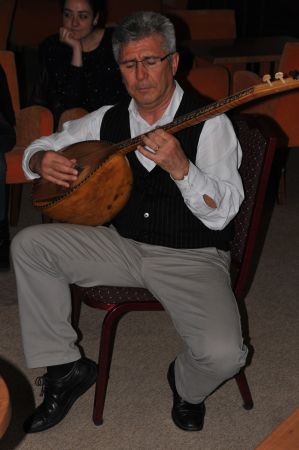 Over the centuries, the saz has also been able to spread further in Kurdish, Iranian, Armenian, Azerbaijani, Turkish and Afghan music. Today, the bağlama is the most commonly used, traditional instrument of the Turkish bards, who are called Aşık in both Anatolia and the Caucasus, which means something like "the lover". Comparable to the use of a lute or a guitar, the neck of the saz also has frets, which determine the tone through the pressure of the fingers and the height of the neck of the saz. However, the saz has additional makams that are necessary for the quarter tones. In addition to the old "Şelpe technique", which can be translated as stroking or plucking, a plectrum is often used today, which either consists of an elongated rubber-plastic mixture or is made of cherry wood, which is more noble. The plectrum is called Mızrap or Tezene in Turkish. However, the somewhat traditional bards continue to use the plucking technique, in which the strings are made to sound with the fingertips. The technique often includes the tapping on the body of the saz to set the rhythm. This is an important feature of the rhythm for many musicians who, in addition to playing the instrument, also master singing. Today the bowing of the saz is becoming more and more widespread.

Different versions determine the image of the Bağlama 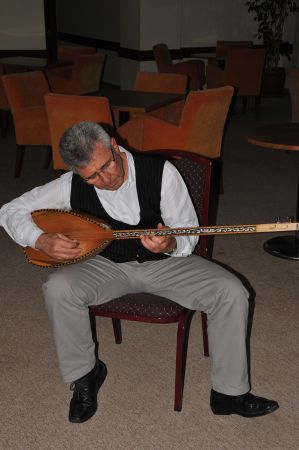 Depending on the length of the neck, a distinction is made between cura, tambur, bozuk, short-necked (kısa sap) and long-necked (uzun sap) bağlama, divan sazi and meydan sazi. The smallest lute with the highest tone and a body length of 15 to 25 cm is the cura, the largest with a body length of 52.5 cm is the meydan sazi, which is often mistakenly equated with the divan sazi. However, the most common instrument is the bağlama. The term saz originally comes from Persian, where it actually means “only” a musical instrument. In Turkish, the term is used somewhat more restrictively, because stringed instruments (telli sazlar) or bowed instruments (yaylı sazlar) are usually meant here. Rarely does the term saz appear in connection with wind instruments (üflemeli or nefesli sazlar) or in connection with percussion instruments (vurmalı sazlar). However, there are a number of other terms in circulation for the Saz, which are more or less common depending on the region: Baz, Berene, Bozuk, Bulgarı, Çağur, Çöğür, Çeşte, Destek, Dıngıra, Dıngırdak, Dombra, Dutar, Harek, Irızva , komuz, kopuz, ruzba, sazilak, tar.

Today it is also used in rock music 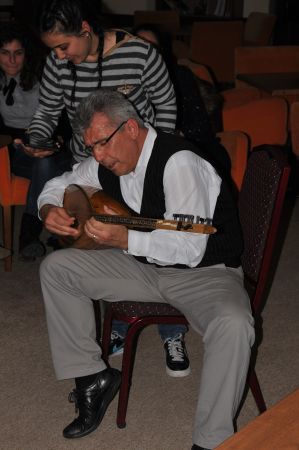 As a rule, the saz has 6-7 strings, which are grouped into three courses (rarely: four two-string courses in the so-called "dört telli", in English "four-string"). The upper and the middle choir each consist of two, the lower of two or three strings. In the upper and in the lower choir there is a bass string that is thicker than the others. The two most common tunings (düzen) of the instrument are La-Re-Mi (bağlama düzeni – bağlama tuning) and La-Re-Sol (bozuk or kara düzen – dark tuning). The latter is used more on long-necked instruments.

The piezo pickup has long since established itself in classical Turkish music, so it is not surprising that the saz is also used in rock and pop music. Well-known international artists such as Loreena McKennitt also combine classical musical instruments and their sonority with their modern compositions, which we, dear readers, can only recommend. 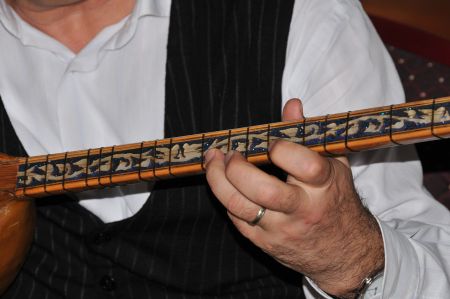 We were impressed by Erol Esen's mastery of the instrument as well as the accompanying singing. Ultimately, this probably also applied to the other seminar participants, because they were soon ready to get active themselves on the quickly prepared dance floor between the tables and chairs in the cafe bar. So the evening didn't end until well after midnight.