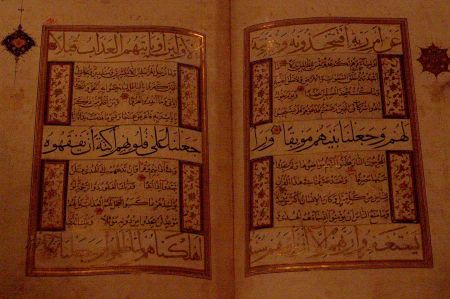 The end of the fasting month Ramadan (Sugar Holiday) is a holiday comparable to the European Christmas with family visits, celebrations and presents. The date of this holiday always changes because the starting point for the next year will always be 10 - 11 days earlier than for the year before.

Seventy days after Ramadan the Immolating Holiday is celebrated as the most important event in the Muslim tradition. Remembering the help and support of Abraham for poor people, this date is the most important in Islamic belief. Lots of sheep, goats and cows are slaughtered and the meat is given to the poor and their neighbours. The Immolating Holiday is also the highlight of the pilgrimage to Mecca. The muezzin announces the time for prayer five times a day from a tower called the minaret. This means that five times a day, Muslim people stop whatever they are doing for prayer. Before praying, they need to wash their hands, their face and their feet. This is the reason for a well in front of each mosque.

Religious Days for praying: The two most important religious holidays are Ramadan and the Immolating Holiday.