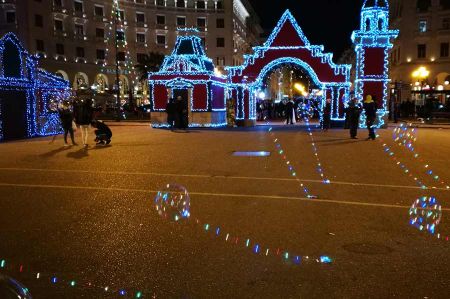 The Christmas holidays have now begun in Greece, but they last longer than in Western Europe, they drag themselves up into the new year.

The traditions of how to handle the holidays, however, are equipped with different priorities than in Western Europe, too. On the 24th and 31.12. and on the 6th of January, the children will knock at the doors of the apartments in the morning and recite the Christmas cantata "Kalanda" and sing traditional Christmas carols. This should bring happiness to the residents for the whole coming year.

The triangel to add the rythm to the singing

After the question "Na ta pume?" (Should we recite with it? "), they set off, often accompanied by a triangle as a rhythm instrument, sometimes also by other musical instruments. As a reward for their presentation, the children usually get money, in previous years, sometimes Christmas sweets were served. In the past, the Kalanda songs almost always started with religious poems, but today often other songs are performed as well. In addition to popular Greek songs, many areas also have their own traditional songs.

In many Greek villages, but sometimes also in the cities, garlic braids with cloves are attached to the walls and doors at Christmas time to keep the "evil tongues" away and thus to keep the happiness in the house. Even wreaths with fir branches are often attached above the door, but this is to greet the guests and to bring happiness to the house. Again, garlic is indispensable, because this is synonymous, similar to the mythology of the Blue Glass Eye well known in Turkey to protect from the "evil eye".

Christopsommo is baked for the most important time of the year

On Crete, the bread "Christopsommo" is baked at Christmas time. Only the best ingredients are used, such as rose water, honey, sesame, cinnamon and cloves. Until the yeast has risen, the women sing a certain traditional song. Then the "Christopsommo" is formed. With the remaining dough small crosses are formed, in the middle of which a white nut is laid, which symbolizes the fertility. With a fork, various characters are formed on the dough to keep "evil eyes and evil tongues" away.

The fire in the oven should stay for couple of days

In many places in northern Greek province Macedonia, the husband or father leaves his home during Christmas Eve in search of a large piece of wood from pine or from olive tree to bring it home. Meanwhile, the housewife cleans the fireplace so thoroughly that no more ashes are left. The big piece of wood in the center then is lit to make a fire. Until January 6, this piece of wood should burn now. Again, there is superstition, because the fire is to protect the house and the fields "from evil", as long as Christ is warmed in the manger.

Good day (/ evening) to all
and, if you like it,
I want tell your home

the birth of Jesus
Jesus was born today
in the city of Bethlehem,
the skies rejoice,
the whole nature is happy.
He is released in the cave,
in the equestrian crib,
the king of the heavens
and creator of everything.
Glory to God in the air (Gloria in Excelsis Deo)
sings the angelic crowd
and thank you, shepherds, for
that the customer spreads.
Constantly directed by a bright star
come from Persia
three of them (magician) with gifts.