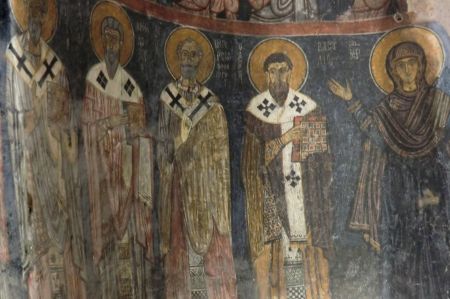 Basilius of Caesarea was born around 330 in Caesarea, Cappadocia, where he died 49 years later on January 1, 379, which is why this day plays such an important role in the Greek Orthodox Church, the day of Christmas and Santa Claus.

Basilius' birth fell into a period of upheaval. His grandfather had died as a martyr during the persecution of Christ under the Roman Emperor Diocletian. Seventeen years before his birth, Constantine the Great, together with his fellow-Emperor Licinius, had joined the Milan Agreement. Five years before his birth, the first Ecumenical Council of Nicaea had taken place together with Arius, the founder of Arianism.

However, in the years following the Council, Arianism brought both the imperial court and the majority of the leading bishops on its side. Thus, there was political pressure to profess Arianism, and even targeted persecution of trinitarian bishops and faithfuls. Trinitarians such as Athanasius of Alexandria or Hilarius of Poitiers were often sent into exile. In the fifties of the fourth century, most Christian churches were controlled by Aryan bishops. It was no longer dangerous to be a Christian, but it was risky to confess in an influential position to the confession of Nicaenum.

Basilius was born as the second of eight children into a wealthy family in Caesarea, today Kayseri in Cappadocia, which has been known for several generations already to follow Christianity. Not a very ordinary family: his grandmother Makrina the Elder, his father Basil the Elder and his mother Emmelia were canonized. Among the eight children of this couple, there are four saints (Basil, Gregory of Nyssa, Makrina the Younger and Peter of Sebaste) and three bishops (Basilius, Gregory of Nyssa and Peter of Sebaste).
The children were brought up in a Christian manner, but they were also given everything that the time of general education had to offer. According to the report of Gregory of Nyssa, the oldest sister of Basilius was also a highly educated woman who knew Greek philosophy and science as well as the scriptures.

Originally, Basil like his father wanted to be a speaker and a lawyer, studying in Caesarea, Constantinople and Athens, where he made a lifelong friendship with Gregory of Nazianz. Another of his fellow students in 355 was the Emperor Julian. The study subjects were rhetoric, grammar, philosophy, astronomy, geometry and medicine, which he was able to apply in his later life.

After completing his studies, he decided to become a monk due to the influence of his older sister Makrina. He studied the monastic orders in Egypt (Pachomian) and Syria (presumably Messalians) and then founded a monastery in a lonely region in Cappadocia. New in his monastic life was the fact that there was not only prayer, asceticism and physical labor, but, in parallel, intensive Bible study.

He only lived five years in this monastery, but this time has had an impact on the present: the detailed monastic rules that he wrote during this period are the valid monastic rules of the Orthodox Church to this day, and have also affected and strengthened Benedict of Nursia and his Benedictine rules.

During a famine, he sold the goods he had inherited and worked in a soup kitchen, treating Jews and Christians alike, based on the reason that "they all have the same intestines."

Archbishop Eusebius now stood helpless against the Arian turmoil. When the Arian attacks on Caesarea intensified, Gregor of Nazianz, who at that time lived partly with Basil, and partly as a young priest, supported his father, between Eusebius and Basilius, and achieved a reconciliation of the two. Shortly after, Basilius was appointed assistant to Eusebius, where he proved to be a brilliant organizer and fighter for justice. He helped with the jurisprudence in the diocese, took care of liturgy and theological questions of the time, which he discussed in his letters.

He preached passionately that the rich should share:
"You say you can not give. You tell those who ask you that you do not have enough to share. Your tongue swears that you can not do it, but your hand betrays you, for though it can not speak, the glitter on your finger declares that you are lying. How many people could make just one ring of you debt-free? How many decaying houses could be repair by its value? Only one of your chests full of clothes could help a lot of people who are now shivering because of cold".

Vistonida Lake - biotope and birds paradise on Via Egnatia