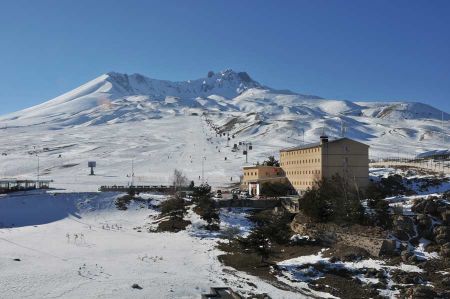 Kayseri (first name was Mazaka, later name was Caesarea) ist he capital city of the region of the same name in Cappadocia in Turkey of about 500.000 inhabitants. Kayseri is one of the very few capitals of Turkey

which number of inhabitants is not increasing rapidly during the last years.

Kayseri is situated about 1054 metres of height above sea level at the bottom of the Erciyes (3917 metres), an extinct former volcano being responsible for the tuff rock layers of Cappadocia. The inhabitants of Kayseri are known as really clever and good businessmen.

Kayseri is one of the most important centres of industry and trade of Turkey. The town owns the biggest industrial area of all big centres and it is the only town of Turkey with does not have any depths anywhere. The opposite is true: Kayseri owns parts of the big bank houses of Turkey. About 80% of all furniture being produced in Turkey are from Kayseri. Other important products are doors, all types of metal, house hold goods and food are produced over here and are enough for the main needs of Turkey. Six of ten of the biggest industrial managers are from Kayseri.

The biggest companies in and around Kayseri belong to business people of Kayseri. Amongst these owners the most rich Turkish person needs to be mentioned: Sakip Sabanci, who owned lots of huge companies in Turkey and it was being told that he left for Adana in young years to find a job. But as well names like Halit Narin (Narin Tekstil), Kadir Has (Has Holding), Izzet Özilhan (Anadolu Grobu), Haci Boydak (Boydak Holding-Istikbal), Necati Kurmel (Saray Hali) should be mentioned because they have their orign in Kayseri.

The town as well is a very important intersection for all traffic of Turkey. There is a quite important airport (Erkilit Airport) and the railroads are crossing of here as well. The road connection to other big towns are done by highways of European standard and even the country side roads are well done.

The town is famous for ist air-dried ham from beef (Pastirma), which is covered by a spicy layer. Quite well known are the garlic sausage "Sucuk" and filled pasta called "Manti".

Kayseri has got two teams in the Turkish Superlig. The oldest one is Kayserispor, founded in 1966 with the team colours red and yellow. Since their beginning they have been in the starting formation of the Superlig for nine times. As well they have been champion in the second league several times. Kayserispor came back to first league last year.

Nowadays the new club Kayseri Erciyesspor was able to do something really fantastic: They started as semi-professional team and got to first league within a couple of years. Their colours are blue and black. Both of the teams are using the stadium of Atatürk (capacity 30.000 visitors), one of the oldest stadium of Turkey. Shortly later a new modern stadium will be built outside the city centre.

Brunn am Gebirge - a tour with Robert