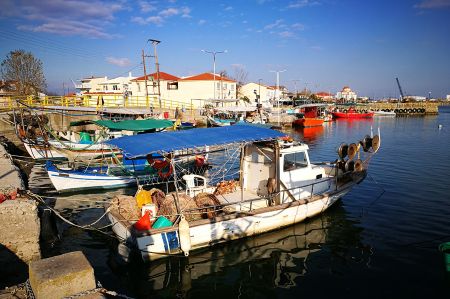 We were on our way to Turkey when the really sunny weather caused us to leave the highway modern Via Egnatia behind Kavala to circle Lake Vistonida.

As the ruins of the ancient city of Abdera, an astonishingly settlement settled by people from Klazomenai in today's Turkey, can be found here, the lake with its wetlands and the animals that flounder in it together with Abdera could also be a destination for a tour in preparation in Greece.

Lake Vistonida is a relatively shallow water between Xanthi and Rodopi, which, together with Porto Lagos, the Ismaris Lake and neighboring lagoons, forms the largest Greek wetland area under the protection of the Ramsar Convention. The Vistonida lake was created about five million years ago. The name was given to him according a thracian tribe living here in antiquity, the horses of the diocese king Diomedes are known to the historians from the Heracles legend.

300 of the 422 species found in Greece are native to Lake Vistonida. The ecological nature of the area is, however, threatened by hunting (although the use of firearms is prohibited in parts of the area), as well as by settlement and tourism, but alternative tourism is promoted by the state.

The lake is one of the most important winter quarters for migratory birds of all kinds, especially pintails and various duck and goose species, with its tamarisk lakes, extensive reed beds and marshes. It serves others as a station on the flight. The breeding birds are spoonbills, redshanks, sabers and several terns. Pelicans, flamingos, and the spur-wire mesh found in Europe belong to the bird species to be visited, as well as the rare white-headed rudder.

There are wild cats, jackals, badgers, wolves and deer species in the riverbank and the bushes around the lake, and especially in the estuary delta of the Komsatos. In rare and endangered plant species, the spawn-herb, water nut and the beach rye subspecies.

Already in ancient times, Aristotle wrote that "the most diverse kinds of fish are found in Vistonida lake."
We enjoyed the little detour and took some pictures, which might also tempt you.