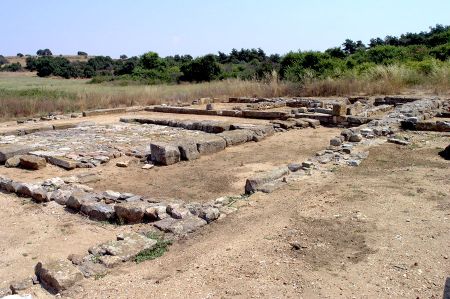 For our way back to Turkey we had chosen Skopje in Macedonia and Thessalonica along the old Roman road Via Egnatia, the now well-developed highway A2 across Greece, which leads  towards the Evros up to Kesan crossing the border of Turkey.

The only drawback of this otherwise great, well-done road is the missing of resting places to enjoy the view on the Greek Aegean a little more. To enjoy the scenery even more, which had already struck us during our last return trip, this time we left the highway near Kavala and after three kilometres we already arrived at the almost deserted sandy beach, which invited us for a picnic and a swim. Thinking about the way to Izmir, which was still ahead of us, stopped our extended swimming because we had also planned another stop in Abdera, the ancient trading town at the coast of the Greek Aegean.

Within the studies of the history of the philosopher Democritus and Protagoras, the name of the city Abdera was repeatedly dropped, so we had a little more deep research and found that this city, against otherwise known settlement policy of the Ionian city Klazomenai, about 20 kilometres from Izmir at Güzelbahce, had been settled in 656 BC under Timesias for the first time. Today Abdera is a small community of about 4,000 residents in the prefecture of Xanthi.

However, the first settlers from Klazomenai had little luck in their Greek colony, because in armed conflicts with the residential tribes of the Thracians almost all new settlers were killed. Only with a new settler glut, which, this time coming from Teos, settled in Abdera, the city founding could happen.

Long time before the Romans, the settlers from Teos knew the importance of the strategic location Abdera at the later Roman trade route Via Egnatia because as experienced merchants the position between Constantinople and Rome as a trading post was completely clear. Long before the Romans, the Ionians had established a system of trade routes, which worked similar on land and sea, because Abdera had, as a trading position on the ship route from the Black Sea, a well-known name too.

The hinterland to Abdera contributed to the rapidly growing prosperity of the new settlers. Huge forests in the valleys of the river Nestos offered rich forest stand and fertile soil for usage as arable land and pasture. Also, the river and its tributaries itself offered plenty of food in the form of fish and income from precious metals that were flushed out from the mountains. Slowly between the Thracians and the new settlers a kind of dependence was developed, which was also based on trade. The Ionic colony on the coast had salt from the orient, crafts, art and ceramic products. The Thracians had agricultural and livestock products, timber for house- and shipbuilding as well as various metals, so that a brisk trade arose in which the armed conflict would only be disruptive. The Ionians accepted the people of the Thracians more and more as a kind of "civilized" barbarians. The prosperity of the city grew, which can be interpreted from coins found in Egypt and Mesopotamia, so far-reaching, the trade had expanded. From records we also know about the immense high taxes that the colony Abdera had to pay to Athens.

Abdera had a well-functioning administration

Gone hand in hand with the establishment of Abdera was the democratic order system of the city, which had a public meeting and a well-functioning administration. Several times Abdera was besieged during the episode, destroyed and rebuilt. Above all, the occupation by the Persians in the years 515 - 498 BC had great losses. With the defeat of the Persians during the following wars, Abdera also included to the Attic Alliance during the year 478 - 411. Increasingly then, the influence of the Macedonians on Abdera was felt and so the city was under Macedonian government between 352-198 BC. Only with the increasing influence of the Romans it should change again and from 196 BC Abdera was incorporated to the Roman Empire, but political freedom was largely maintained.

With the expansion of the Via Egnatia by the Romans, who based lot of their crop from today's Ukraine, Abdera soon lost its once powerful trading position, was run down and also the expansion of the marshes at Nestos contributed to the downfall of the city. In the Middle Ages the city was only meaningless.

Since about the mid-60s continuously excavations take place in Abdera, whose findings are exhibited at the archaeological museum of the modern city, which is a few hundred meters placed next to the ruins. Every now and then you find some comments, calling Hercules as the founder of the city of Abdera. Thus one finds interpretations that the name Abdera is said to have derived from Heros Abderus. Probably these findings, however, are attributable to more mythology.

For us, in any case, these ruins and museum were interesting enough to visit Abdera with a little more time with the next trip again; perhaps in a combination of beach and culture for a few days in late autumn.

Alexandroupolis - A cycling trip and border crossing to Turkey