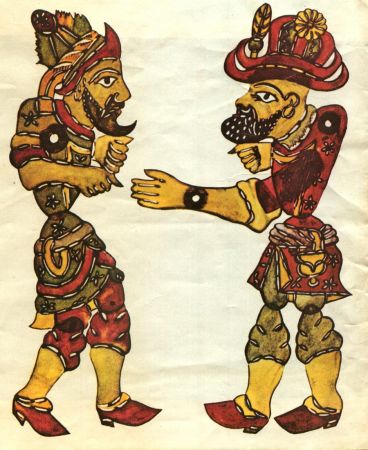 - Traditional drama (Light comedy)
Our shadow play KARAGÖZ HACIVAT, being a cornerstone of our traditional culture’s galanty show and fairytale teller and mimic, were created centuries ago.

They made the public think while laughing and from time to time had a leading role in the creation of social consciousness.

Galanty Show, which depends on the reflection of the portrayals’ shadows made of leather on a white screen, is an art special to eastern cultures and there are different stories about their emergence.

While there is no definite information when the Shadow Play technique was first used in the Turkish society, there are different views about its emergence in the Turkish culture and when it took the form of Karagöz and Hacivat. The most common one among these takes place at the construction of Ulucami in Bursa during the Sultan Orhan period (1324-1362).

Workers, who want to listen to the humorous conversations between ironmaster Kambur Bâli Çelebi (Karagöz) and bricklayer master Halil Hacı İvaz (Hacivat), stop working and gather around them, thus slowing the construction work. Upon hearing about this, Sultan commands the execution of both of them. (According to another rumor, Karagöz is executed and Hacivat died on the way while going to pilgrimage in Mecca).

Şeyh Küşteri, who wants to cheer the repented Sultan afterwards, stretches his white turban cloth by taking it off from his head and by lighting a candle behind it, and characterizes the Karagöz and Hacivat with his taken off shoes and repeats the humorous conversations. After that date, Karagöz and Hacivat plays started to be performed in different locations. Today, Karagöz screen is called as Şeyh Küstari arena and Şeyh Küstari is regarded as the master of Karagöz performances. First definite document about Karagöz is from Surname-i Humayun dated 1582 and explaining the prince’s circumcision feasts.

Leading role of the play is Karagöz character; he is an uneducated ignoramus man but represents the foresight of public. On the other side, Hacivat is a smart and open-eyed character, who loves to use foreign words relying on his little education, knows everybody and is a self-seeking individual. He generally aims to sponge on Karagöz. Karagöz, who doesn’t understand the foreign words used by Hacivat or seems to misunderstand them intentionally, imposes different meanings to his speech and various jokes are thus produced.

Karagöz plays, which used to criticize the daily events in a humorous way in the past, were later put on stage based on the memorization of the written texts because of various reasons after the Administrative Reforms and the improvisation tradition was thus abandoned. Broadening the art of Karagöz like it was in the past will only be possible if the improvisation tradition is adopted again.

Portrayals made of leather and painted with madders since the time of Şeyh Küşteri were coming into life in Hayali’s hands.

The person performing Karagöz plays is called “HAYALI”, and Hayali’s assistant is called “Yardak”. Hayali title is given to the ones by their masters after performing as an accomplice (assistantship, apprenticeship) to a master for many years and gaining the full ability and talent to perform Karagöz and Hacivat completely. Nobody could come up to the scene by saying “I am Hayali”.

A real Karagöz master makes his characters from leather by using madder and vocalizes all characters with different tone of voice and different accents (including female voice).

I grew up close to the Hayali Safderi Metin Özlen, who is one of the biggest masters of Karagöz art for all times. One day in a documentary of TRT, my master has given me the Hayali title and also a Pseudonym, and said

“You craft the leather very well; in the past those who process the leather well were called ‘saraç’, so let your name be Hayali Saraç Emin”

and gave me greatest honor of my life. And I was able to start performing Karagöz professionally only after that time.